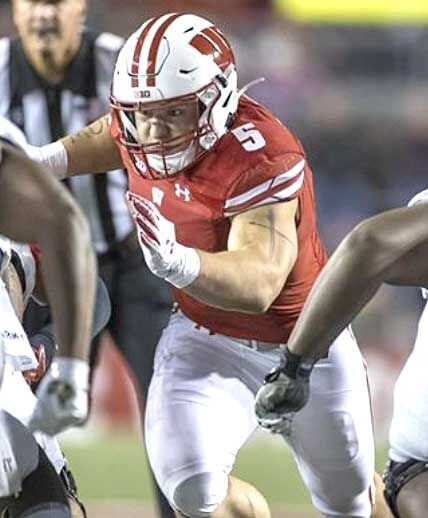 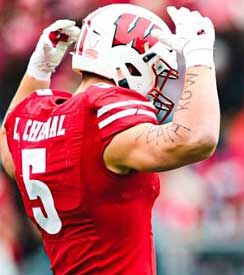 Grantsburg Pirate alum Leo Chenal is hoping to earn a high round draft number as he foregoes his final year of college to enter the National Football League, where he is already projected to go in the early rounds as a defensive standout.

Grantsburg Pirate alum Leo Chenal is hoping to earn a high round draft number as he foregoes his final year of college to enter the National Football League, where he is already projected to go in the early rounds as a defensive standout.

Grantsburg alum and celebrated Wisconsin Badger football star Leo Chenal declared over the weekend that he will bypass his senior year at Madison to pursue a career in the National Football League, declaring his eligibility for the upcoming NFL draft.

Leo Chenal drew national attention this season when he set a number of benchmarks for the Badger defensive attack, setting several records and establishing himself as a force to be reckoned with, alongside his Badger brother, John.

“Growing up as a kid in Wisconsin it’s everyone’s dream to wear the ‘W’ on the side of your helmet one day and play in Camp Randall!” Chenal wrote on his social media account. “I’ve been honored to do that these past three years alongside my brother John, who has pushed me every day to be better!”

Leo announced his intent on Jan. 3, where he not only thanked the coaches, staff and teammates at Madison, noting his being part of the so-called Badger ‘Death Row’ on defense, but also noted his strong local support as a 2018 Grantsburg alum.

“I want to send a special thank you to Gburg! The town that molded me! That’s small town taught me work ethic and what hard works truly means!!”

Chenal than thanked God and his fiancée, Randi, while outlining his intent to forego his senior year and declare himself eligible for the 2022 NFL draft.

“Badger Nation I can’t thank you enough for the support! I know you’ll be behind me on this next journey as well!”

It is unclear if brother John Chenal - himself a solid Badger fullback on offense - will also forego his senior year, but with his intent declared, Leo Chenal is expected to get plenty of attention at upcoming NFL ‘combines’ and workouts, where scouts, coaches and media speculators will set priorities for the coming NFL draft, which is set for three days at the end of April in Nevada.

In what turned out to be his final year as a Badger, the 6-foot, 3-inch Chenal was awarded the Big 10 linebacker of the year, and set several U-W-Madison records on defense, including leading the Badgers in tackles (115) and tackles for a loss (18.5). He was also second on the Badgers in recorded sacks with 8, in spite of playing in just 11 games, after missing two games with a positive Covid-19 test result.