The new bridge will be wider, taller, higher and safer for boats and traffic 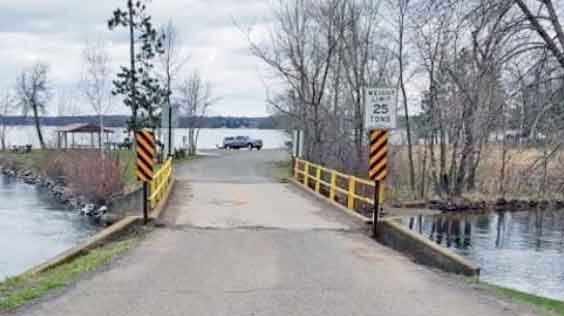 The current Yellow Lake Road Bridge is nearly a century old and not designed for modern traffic or vehicle loads.

The new bridge will be wider, taller, higher and safer for boats and traffic

The current Yellow Lake Road Bridge is nearly a century old and not designed for modern traffic or vehicle loads.

Last week Burnett County Highway officials held the second public involvement meeting on the planned replacement of the undersized Yellow Lake Road Bridge, which goes over the channel between Yellow Lake and Little Yellow Lake in the Town of Union.

“I know this is a sensitive subject for many people,” Burnett County Highway Commissioner Mike Hoefs stated at the Friday, April 30 public hearing, which was held at the county highway shop outside Siren, with people also attending virtually.

The hearing was a chance to outline the plans for removal of the current bridge and replacement project for a bridge over twice the size. The new bridge will not only be larger for safer vehicular flow, but it will also be higher off the water, allowing larger or taller boats to pass beneath.

Hoefs went over some of the history of the little bridge, which was built in 1925, designed for smaller loads and generally smaller vehicles. It has always been just 13-feet wide, which means it is “functionally obsolete” in the Wisconsin Department of Transportation’s eyes.

The bridge is currently rated to hold just 25 tons, which Hoefs said may be reduced even further before it is replaced in the fall of 2022, just to be safe.

The bridge was privately owned until 2007, when it was

taken over by the county, with the goal to replace it with a wider, more conforming and safe structure.

However, the bridge was not eligible for federal replacement funding until it reached a certain condition of disrepair, which it recently reached or fell to.

The first public meeting on the bridge and road project was held last August, when many of the design details and plans were still unclear. Those plans are now more set, as the new bridge will be a single-span, concrete slab bridge, with simulated stone masonry on the sides.

As Hoefs noted, if any adjustments are made to the plan for things like aesthetics -- or as several people asked, making the bridge even taller to allow for larger boats -- those costs would have to come entirely from local sources.

Hoefs outlined some of the engineering specifications with Ayres Associates project engineer Dan Sydow, who said the new bridge will be twice its current width, with much more realistic modern weight limits, as well.

However, because the bridge currently has just a 20-foot easement, the additional width and height of the bridge requires the purchase of additional property, as the approach will need to be larger, wider and far beyond the current right-of-way near the bridge. That additional property will come at the expense of some Burnett County park lands and some lands currently owned by the Yellow Lake Lodge Condominium Association to the north.

As Hoefs pointed out, an even taller bridge would require significantly more property to make the approaches and sides less steep.

“That would also add quite a bit of additional cost to the project,” Hoefs said, although there were no actual estimates on that option.

The current DNR minimum specification would require at least  5-feet of clearance beneath the bottom of the bridge and the ordinary high water mark, which is typically a few inches higher than the typical lake level. Sydow estimated the boating clearance will be about 5-feet, 8-inches underneath, which is much higher than its current clearance, allowing more typical boats to use it for passage between the two lakes and the Yellow River to the West.

Sydow said the new bridge will be thicker, up higher and needs more ramping to get up to it, but noted that if they go too high with too much slope, it can make it unsafe for traffic or pedestrians, who may not be able to see over the top of it, which is also the reason they are designing the bridge for 20-mph traffic, with an overall project length of 285-feet, from approach limit to approach limit.

“We’re trying to minimize the impact on the park and the other properties,” Sydow said, adding that the lake levels will not be affected during the project.

Even though the new bridge will be at least 2-feet higher underneath, some people at the hearing asked if they could go higher still, for even larger boats with canopies and lighting, wondering what it would cost.

Sydow and Hoefs both said the added cost would be prohibitive, and would need to be absorbed entirely by the town and the county.

Other issues they addressed included the project timeline, which will next move to the real estate acquisition stage, from  July through October. They expect to have final plans in place in the first weeks of November, with WisDOT then taking over once the plans are complete and the property purchases are finalized. WisDOT will coordinate the bid letting, which is expected to go out next March, with summer/fall 2022 construction slated to start on Aug. 1, 2022, in part due to issues with fish spawning, the DNR is not allowing any waterway work prior.

There are several environmental issues to consider during the project, including minimizing the impacts on wild rice beds, wetlands and specifically to at least two fish species, pugnose shiners and lake sturgeon, which is part of the reason for not starting until August.

“It’s really going to be a great looking project when it’s all done,” Hoefs said.