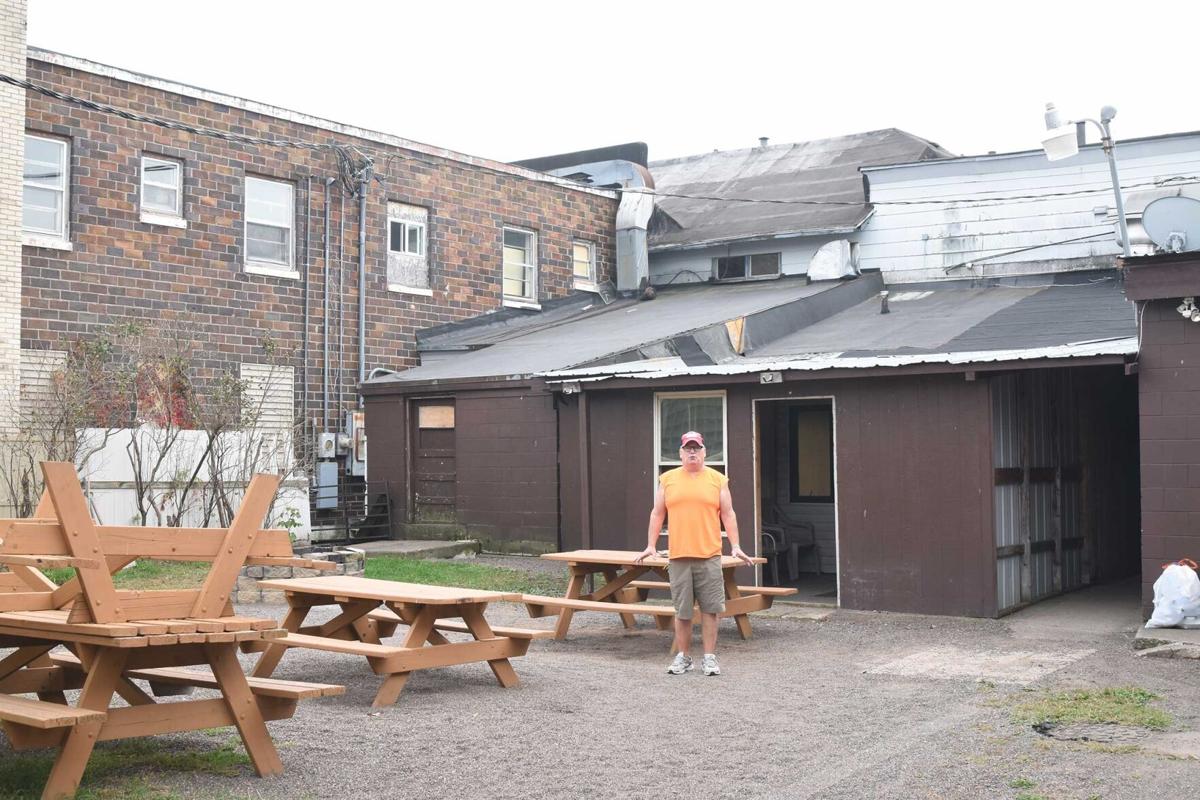 Todd Satter is standing very near where they will add an outdoor Tiki Bar, seating and a stage off to the left, for live music or comedy shows. 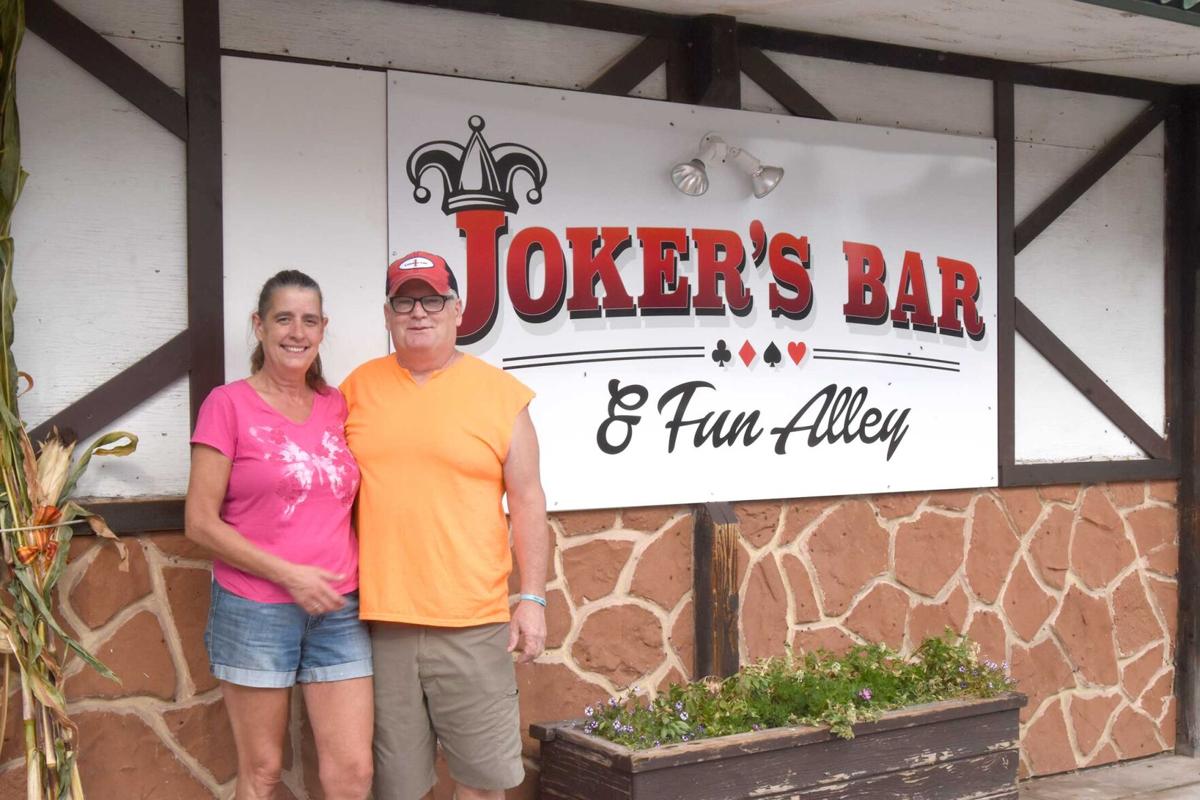 Owners Todd and Karen Satter have a variety of changes, improvements and cool activities in mind for Joker’s Bar and Fun Alley in Grantsburg. 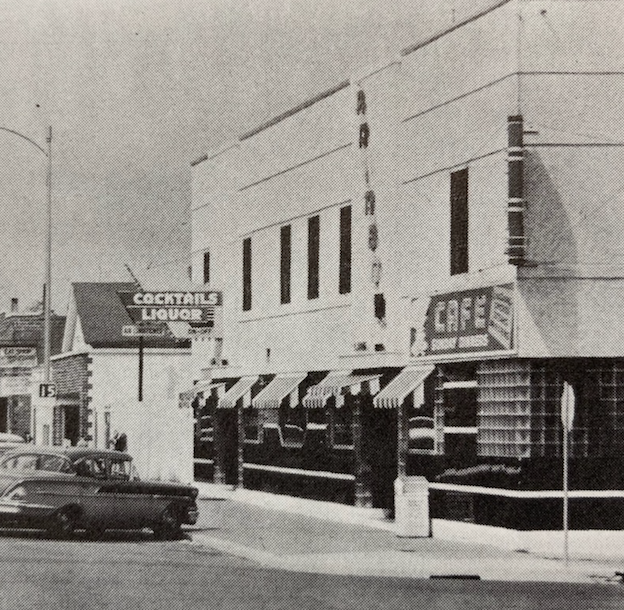 The intersection downtown was known as ‘Rainbow Corner’ for many decades, with a hotel, bar and cafe.

Todd Satter is standing very near where they will add an outdoor Tiki Bar, seating and a stage off to the left, for live music or comedy shows.

Owners Todd and Karen Satter have a variety of changes, improvements and cool activities in mind for Joker’s Bar and Fun Alley in Grantsburg.

The intersection downtown was known as ‘Rainbow Corner’ for many decades, with a hotel, bar and cafe.

There are some cool mysteries at ‘Joker’s Bar and Fun Alley,’ the tavern formerly known as ‘Denny’s Downtown Lanes,’ which not only has new owners, it has an exciting, even exotic future, according to co-owners Todd and Karen Satter, who have big dreams for their new joint.

“Oh, I’ve got so many plans,” Todd said with excitement as he started to give a behind the scenes tour. “You’re really gonna love this…”

For many years, the intersection of Madison Ave. and Pine Street was known as Rainbow Corner, as it housed the Rainbow Hotel, Café & Bar. The aged glass block windows are still in pretty good shape, and on a sunny Friday, the dancing ‘Roy G. Biv’ light glints off Todd’s T-shirt, who is giddy as he talks of the past and what the future holds for Joker’s Bar - named for his stand-up comedy background.

He noted the rich history the property holds – with several cool mysteries - from rumors of a basement ‘speakeasy’ bar to secret tunnels, remote release doors and much more.

Reinforcing that mystery is a strange, octagonal wooden structure with a series of hidden motors, compressors and tubing, laying on its side in the struggling rainbow light of the glass block corner, of what used to be The Rainbow Café, which was “… known for its cute, round tables and metal chairs” generations ago in a 1965 historical pamphlet.

That strange octagonal machine is a grand example of what the former Rainbow Corner has in the future, according to Todd and Karen.

The storied property has a grand opening this Saturday, Oct. 9 with the Satters in charge and primed about the future and the grand plans for the property.

Todd reaffirms historical documents showing that the current building incorporates what used to be four separate buildings into one, and the corner has been everything from a photography studio to doctor’s office, bowling alley, boarding house, several taverns, restaurants, ice cream shop, event center, candy shop and more, including yes, that rumor that it had a basement ‘speakeasy’ during Prohibition, secret door and all.

“The guy upstairs had to ring you in,” Todd said, with a grin, pointing across to the bar. “It was called ‘The Downtowner’.. no windows, no nothing, tunnels across the street, it was pretty cool.”

Todd is excited about all of it, and they have already started to repair, enhance, restore and rebuild the historic property, with an eye toward making it a little bit of everything, from all ages activities to adult stand-up comedy, live music, food and drinks of all flavors, including an exotic ‘Tiki Bar’ plan for the back courtyard that is bound to include umbrellas of all sizes.

The Satters are bent on not only making the historic corner spot someplace that’s cool to visit, they want it to be their ‘swan song,’ of sorts, and they have a solid history to show it can happen: They’ve essentially cashed in their successful, 37-year Minnesota painting business, turning it into Joker’s Bar - enhanced with a long history of successful property restorations in the books, already.

They are also hoping that the allure of the establishment and its many options will keep the customers coming back, so it can get even better.

He’s already added a bar food menu, with more to come down the line, added new games, and will add spaces for everything from small birthday parties to holiday gatherings, live music and more.

While the Satters have big plans, they also know it’s going to be tons of work, but they also look at it as a fresh start, a sort of second chapter after the loss of their teenage son, eight years ago, who took his own life at age 17.

“This is the best thing to happen to us since that tragedy, “ Todd said with a slight smile and a shake of his head. “We’re excited about it, and this is our last life project, really. We bought it to retire here!”

Todd and Karen are throwing themselves into this, and they are confident they can make the huge building into a premier bar and entertainment center, and walking through the complex, the plans are both ambitious and realistic, using what’s already there, including equipment that was never utilized, and rooms that haven’t been used in decades, as well as eventual restoration of the upstairs apartments to offer rental housing, building off over a century of residents living upstairs, above the downtown. He holds off on showing the current condition, but is adamant that it is part of the long-range plan.

The Satters are dead set on how accommodating and in character the downtown location will be, and the work has already begun, as he covers several unused bowling lanes into activities and games, pool tables, cornhole and more. It will keep two bowling lanes, with a variety of other games replacing the remaining lanes, but only pulling out the score tables and monitors.

“Leaving everything else under there, not hurting the value,” Todd said assuredly.

He is committed on keeping and enhancing the history, while adding unique cool features like the outdoor Tiki bar, vintage memorabilia, real tables outdoors and stages for live music or entertainment, inside and out, which maybe will get Todd on stage.

He is keeping track of it all, and making it so the coolest features aren’t lost, but that rich history is worth noting, too.

The Rainbow Corner property had its first Land Patent in 1863, to none other than area founder Canute Anderson, who owned the property that later was surveyed and platted on the 1870s later having multiple buildings on the corner, tightly packed, with the largest corner spot known as ‘Mrs. Hickerson’s Building,’ with other portions being a confectionary, with the main building sporting a unique roofline that was sacrificed decades later for a balcony and more room upstairs.

Todd Satter and others have even mentioned the long-rumored tunnel system spidering out from Rainbow Corner, although they’re capped it may have been to share heating duties among the buildings and across the street, kind of a shared heating cooperative.

Somewhere along the line, all four buildings were combined into a more common structure, possibly to share heating, but also to expand into an even larger structure, with many rooms, catacombs, stairwells and smaller boarding rooms upstairs.

It was a very busy place in the 1960s, as it became Dingmann’s Rainbow Hotel , Café and Bar, but had many iterations along the way, and later became Denny’s Downtown Lanes, before the Satter’s took over.

Todd and Karen are committed to making the huge corner complex into something downtown Grantsburg can be proud of, both inside and out, with his first tasks being to make the corner property look its best, which is among the changes we’ll see pretty soon, with some of the interior projects slated to make this a fun winter.

“We’ve got a second lease on life, and we sort of look at this as our baby,” Todd added, noting the games, outdoor patio and other projects ahead. There’s plenty of room for activities, including something to use that strange, octagonal compressor machine, which Todd is eager to get going.

“It’s a money machine!” He exclaimed on the stand-up glass booth, meant for short-lived contests of people to ‘grab’ cash. “Throw some money in there and turn it on … it looks like a million dollars!”

Yes, the fun has just begun.