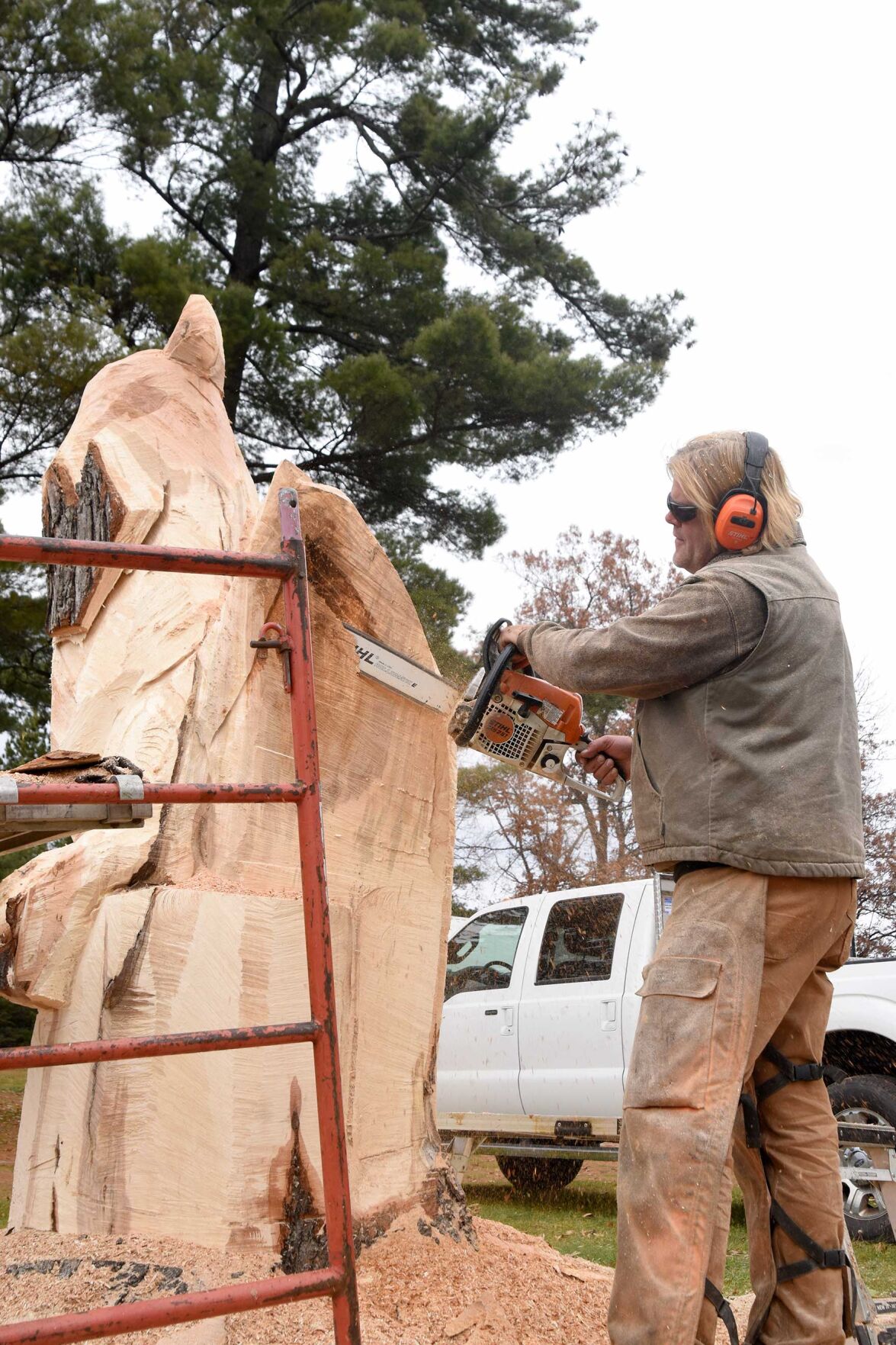 Chainsaw artist  Perry Carlson takes a big chunk of wood out of the new Siren Dragon roadside attraction he is sculpting at Crooked Lake Park. 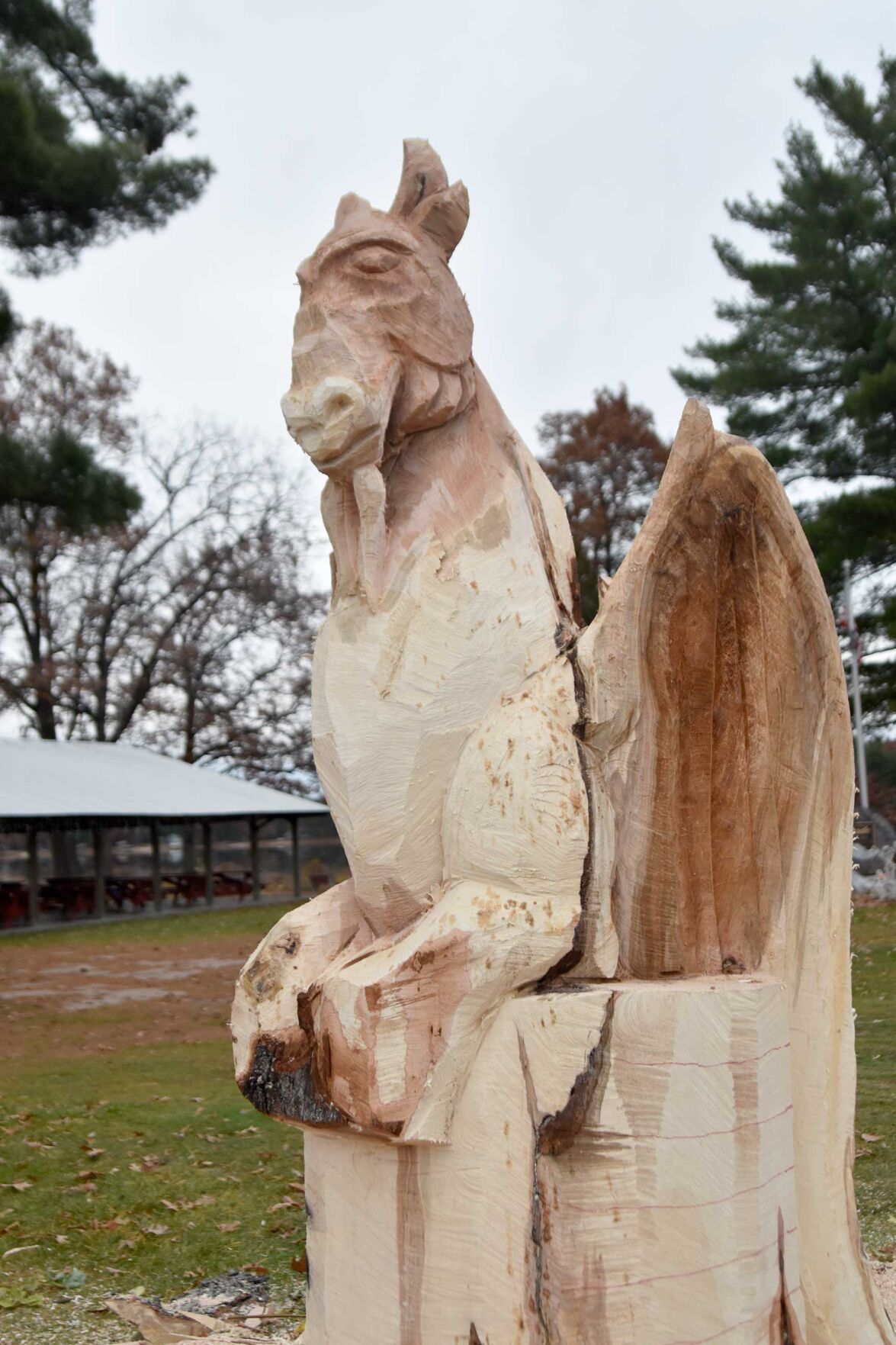 Perry Carlson’s maple dragon just needs some paint and wood sealer to be the latest addition at Crooked Lake Park.

Chainsaw artist  Perry Carlson takes a big chunk of wood out of the new Siren Dragon roadside attraction he is sculpting at Crooked Lake Park.

Perry Carlson’s maple dragon just needs some paint and wood sealer to be the latest addition at Crooked Lake Park.

A very cool new roadside attraction is coming to life in Siren, as a collaborative effort to create a carved, wooden dragon in the village’s Crooked Lake Park got the green light last week and quickly moved into action, after approval by the full Siren Village Board.

Work began on the carving project on Monday, Nov. 8, and the project became a popular spot for people to see the sculpture come to life.

The village has agreed to fund the project, with final estimates coming in around $2,000, with the Siren School District also agreeing to commit to a portion of the overall project cost, they have agreed to assist or take part in the long-term maintenance of the wooden dragon.

The carving artist, Perry Carlson, is from just over the border in Minnesota, and began work on the project this week. He is a noted chainsaw sculptor, and has done several large-scale projects around the region.

“A lot of people have been stopping to see what we’re doing,” Carlson said during a break.

costs, which will likely include annual varnish and paint.

The issue came before the Siren Building, Grounds & Parks Committee on Nov. 4, where they unanimously approved the project, with the full village board putting their support behind the project last week.

The artist is Perry Carlson, with assistance from Robert Halverson. The dragon is/was being carved in the existing maple stump that is located to the north of the electronic sign towards the Crooked Lake Band Shell.

“There were larger trees that were removed earlier this summer by (the Siren) Public Works Director and the one stump was left for this purpose,” stated village clerk Ann Peterson.

In fact, Public Works director Jim Jaskolka said the crew was taking down the old maple earlier this year when they stopped a few dozen feet off the ground, noting that it was in a great location for a carving.

“I figured it might be worth saving, just to see if it (a carving) could happen,” Jaskolka said.

Other village board members agreed, and trustee James Pearson reportedly suggested they do a dragon, and the call went out, with the school dragon logo being used for a spec estimate, with noted chainsaw sculptor Perry Carlson answering the call.

“They gave me a photo of the logo, and I just took it from there,” Carlson said on a break between changing saws, as he brought no less than seven different sized Stihl gas saws for the project on Monday, Nov. 8.

Carlson has been traveling the country carving art in wood, using chainsaws since 1987, with Halverson assisting over the last quarter century. Carlson even traveled to Italy in 2005 to study stone sculpting, carving in marble and is an award winning ice carver, as well.

He said that he recently finished up several carvings in Minnesota, including at the Minnesota State Fair Grounds.

“I can’t wait to see it all painted up!” Carlson said of the nearly completed carving, noting that there are several types of preservatives that can be used to treat the wood and make the water shed off, meaning it could be around for many decades, if treated well. He said the tree was a great choice for the carving.

“People have been stopping all day, just checking out what we’re doing and offering up their opinion,” Halverson added between his own cutting. “It’s been a fun day.”

One of the people stopping to see the progress was village trustee Rick Engstrom, who brought his dog, Bella, to the park and checked out the carving

“It‘s pretty cool,” Engstrom said with an assuring nod and a smile. “Lots of great things happening in Siren!”