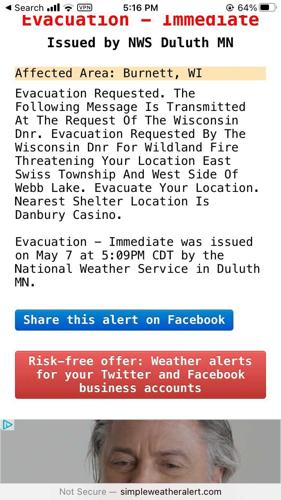 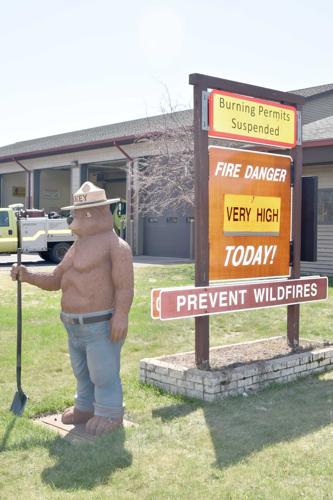 The Webster Fire station showed how high the danger for a wildfire was last Friday afternoon, prior to the recent storms and rains.

The Webster Fire station showed how high the danger for a wildfire was last Friday afternoon, prior to the recent storms and rains.

An out-of-control wildfire near Danbury over the weekend led to a dramatic evacuation notice for residents, but may have gone beyond the people who might have been affected.

The fire was noted to county law enforcement and Wisconsin DNR officials late Saturday afternoon, May 7, and is believed to have begun in an area near Upland Woods Court, east of Danbury and west of Webb Lake.

However, there was a serious concern that due to prevailing strong winds, the blaze may have threatened numerous other structures and areas, which led to Burnett County Emergency Management (BCEM) issuing an immediate evacuation notice to a very select area that may have been threatened - specifically to three sections of both the Town of Swiss and another three sections of the Town of Webb Lake.

They used an emergency text message systemcalled Wireless Emergency Notification System (WENS) which did not specify those areas, and a number of people received the message who were not actually in danger.

“I was later informed there were notifications sent outside the intended area,” stated Burnett Emergency Management Director Aaron Bentley. “I then initiated a County-wide notice to help inform the public of the area requested to evacuate.”

While there may have been some confusion on the matter, the good news is that firefighters were able to keep the wildfire in control before it expanded too far, and it was wrangled in a short time later.

The state WENS system is used for all types of emergency notifications.

State officials are reminding people that despite recent storms and heavy rains, the local fire danger remains quite high. According to the DNR, it was not just here that had fire concerns, as it was a busy weekend of fire activity across the state, and they’re asking the public to remain vigilant and avoid burning as fire danger remains very high across most of Wisconsin.

While Burnett County is no longer listed as having “Very High” fire danger, they do remain as a   “High” fire danger area, which includes nearby Barron, Polk, and Washburn counties.

While parts of the state are ‘greening up’ nicely, this area still has lots of fuel on the ground, like dead leaves and dry grasses. Although the recent rains have helped, gusty winds and high heat can offset those gains quickly.

More than 70 wildfires occurred over the weekend, including several in Burnett County, making it the busiest weekend of the season so far. Debris burning and equipment fires accounted for most of these wildfires.

- With information from the Wisconsin DNR and BCEM