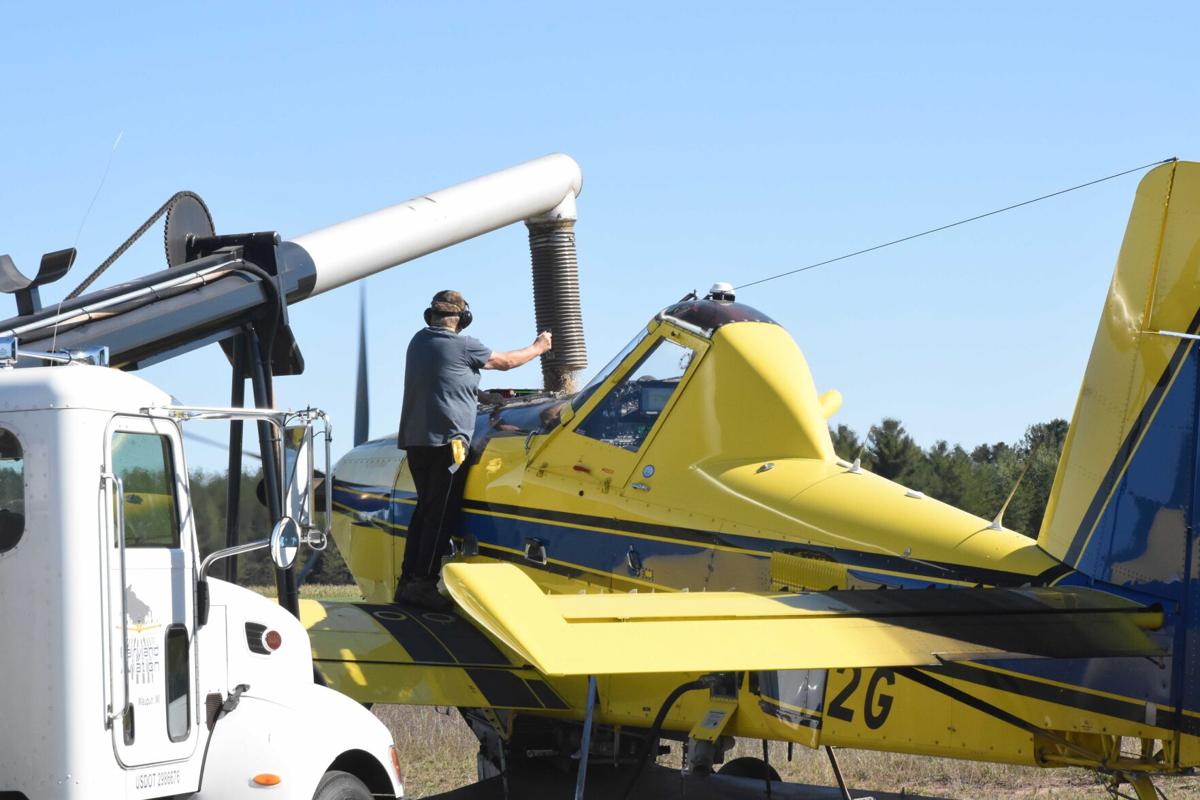 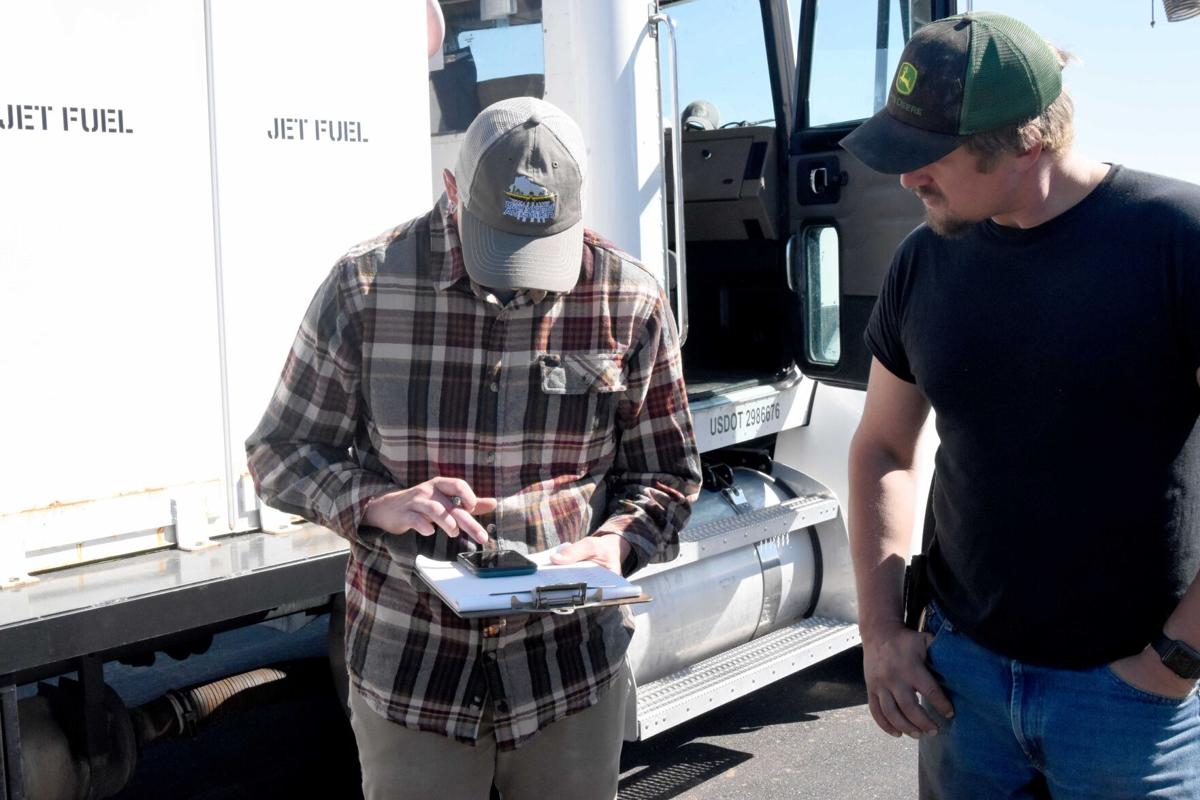 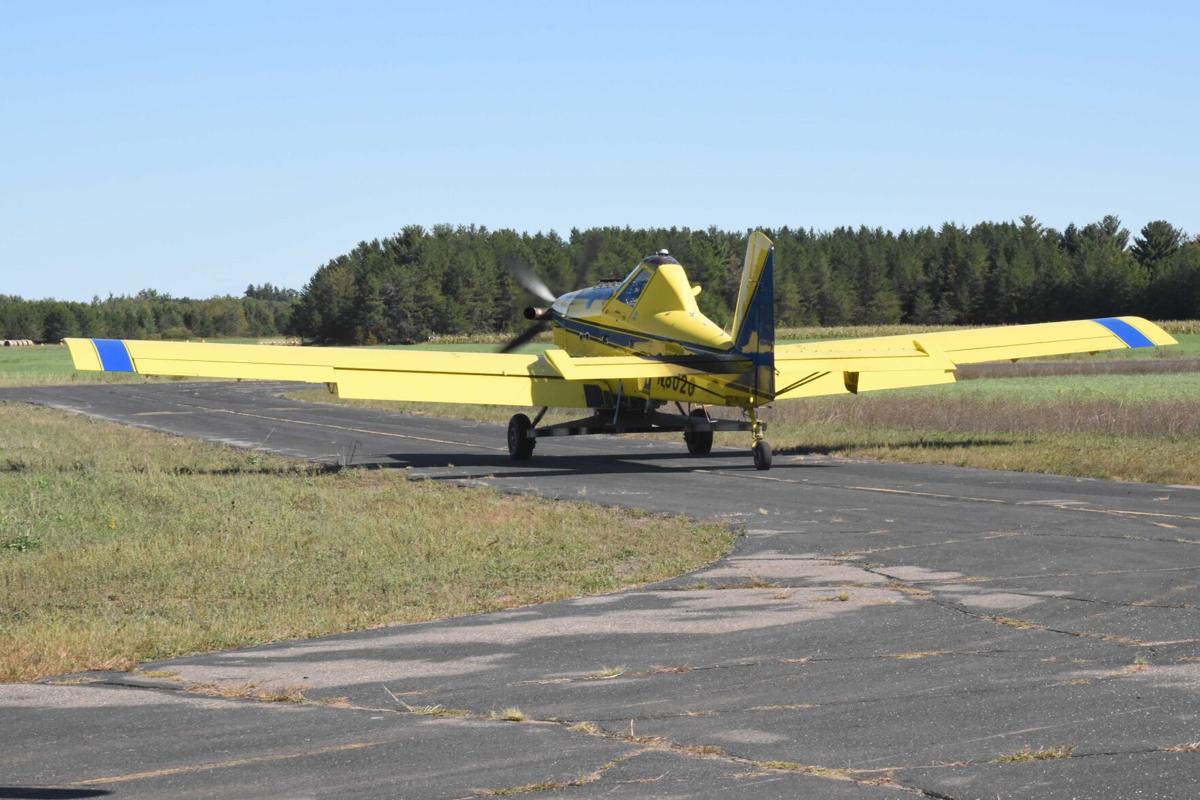 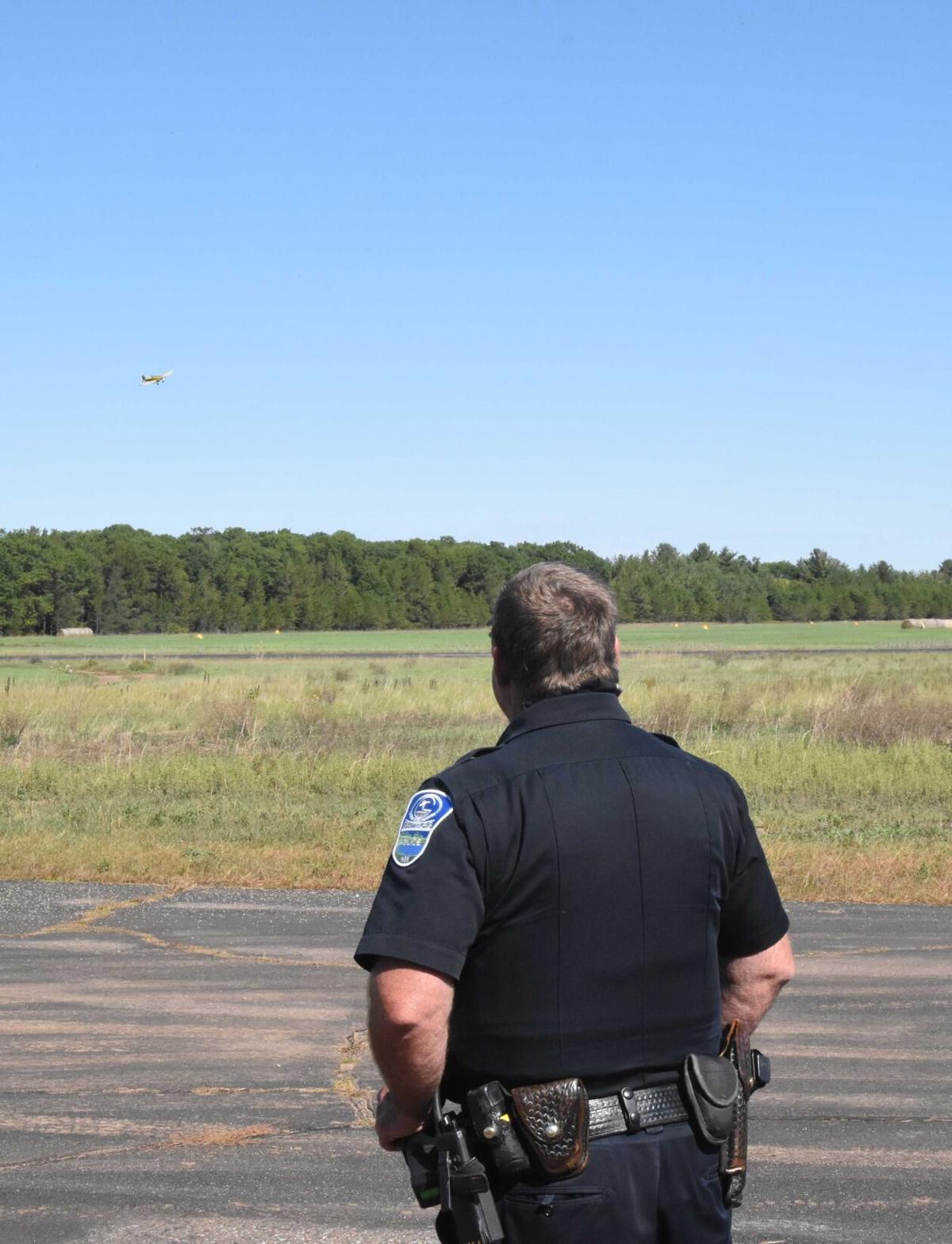 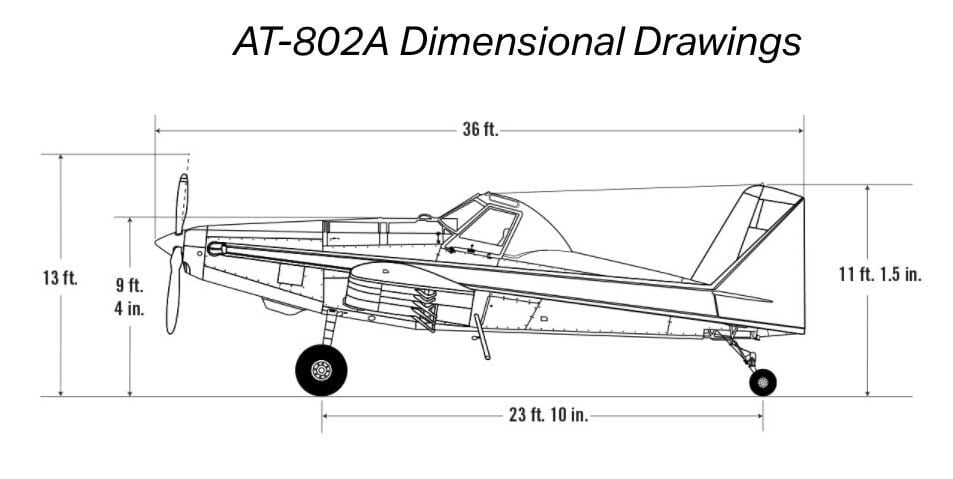 The Grantsburg Municipal Airport was a hive of unusual activity on Wednesday, Sept. 22, as it was used as a fueling and loading station for a unique type of operation, where an airplane is used to apply seed for so-called ‘cover-crops’ over approximately 1,000 acres of the Lucky Oats Farms fields near Grantsburg.

This is the first time for such an operation locally, and the Dairyland Aviation firm behind the day-long application ended up placing over 56,000-pounds of winter rye seed on several farm fields owned by the family.

The plan is to apply the seed at a height to allow up to about a 150-foot swath of seed to fall in and among the corn and soy beans, which allows the rye to get a foothold in the ground and actually begin to germinate in the next few days after application, allowing for a strong winter cover crop and keeping soil and moisture intact and keeping the decades old ‘seed bank’ of unwanted weeds from growing.

“No-till is the way to go,” stated co-owner Jim Melin, who is a fan of the practice and has been using the no-till practice for decades as a way to keep the vulnerable soil from drying up and blowing away. “This is quite the deal, and we figured we’d give this (air planting) a try.”

The Dairyland Aviation crew is a well-oiled machine; they have two men situated at the Grantsburg Airport, ready on a just a few minutes notice for a refueling and refilling operation for the airplane they use to apply the seeds.

When the pilot, Damon Reabe, gets near the strip, he radios ahead to update the ground crew, and to note whether he needs to be refueled.

As he lands the sunflower yellow Air Tractor 802 airplane, Reabe then taxis up to an area where Kyle Miller and Mike Stark are waiting with a unique truck that carries nearly 1,000-gallons of expensive jet fuel while also having a large hopper and auger system, so they can both refuel the thirsty Pratt & Whitney turbine, and refill the Air Tractor’s hopper with up to 4,500-pounds of seed at once.

A typical run can be anywhere from 10-to-20 minutes or so, but they can stay up for much longer. Reabe uses GPS to know exactly where to spread and to note where he already spread seed, reducing overlap. The plane can stay up of over 45 minutes if needed, but loading too much fuel means less seed can be hauled.

The ground operation is impressive, and seems scarier than it really is, as the idling Air Tractor sits, Stark first places the fuel line, then adjusts the auger to fill the bin in front of the cockpit, all at the same time. When it’s all set, Miller hits the PTO and the auger rolls the wispy seeds into the bin, filling it to the top. It all takes less than five minutes, and one time they finished in just over three minutes, with the Air Tractor fueled and full of rye, Reabe heads back out and does it all again.

Stark wears goggles, a  respirator mask and heavy gloves, but he insists it’s not too risky, in spite of the scene.

“It’s only risky if you’re clumsy!” he joked, with Miller agreeing before they head over across the infield to reload the auger truck from another auger set-up, which pulls seed from a loaded semi, using the PTO on a tractor to feed the giant auger that fills the support truck that fill the plane hopper.

Erik Melin is manning the refilling operation, and realized early on that he maybe needed more oats, and had to bring an extra wagon of seed.

“We’re mainly having them do the bigger fields,” Erik Melin said between refills. “We’re hoping to get about 1,000-acres planted today, about 56,000-pounds of seed, or a thousand bushels.”

The seeds are all grown on Lucky Oats fields, and the operation is a way to apply seed while the corn or soy beans are still standing, so they don’t have to knock down or destroy them for planting.

“It’s nice we’re getting to use our own seeds,” Erik Melin said, adding that they have been using no-till practices for over a decade, but this is the first time they’ve ever done it this way. “This is by far the most (cover crops) we’ve ever done.”

Erik is a fan of the cover crop system, and notes that the critters love it also.

“It also gives them something green to eat in the winter!” he jokes.

The air operation is unique enough that it draws a crowd, including a few neighbors who watch the landing, takeoffs and refills, as well as a certain black Ram police pickup, driven by Grantsburg Police Chief Dan Wald.

“I heard about it but had to see it up close for myself!” Chief Wald said as he watched closely and asked many of the same questions, often nodding in amazement at the speed and efficiency of the operation. “That’s really something.”

While no-till is no longer controversial, the air application is not all that common, in spite of the fact that the firm has been doing similar types of air planting, starting with a crop spraying 75 years ago.

The air firm has rich family legacy, and Reabe, as president, is the latest of his family to take over and run the operation, which has two planes and trucks, as well as a crew of mechanics at home in Waupun for the maintenance and work on the custom planes, which can be in operation for decades.

“Air Tractors are built for agricultural use, so spraying, seeding, fertilizer work, etc. do not need any special modifications,” stated Kristin Edwards, from the Air Tractor headquarters in Texas. “For dry applications (seeding, fertilizer) a spreader is used rather than the spray booms under the wing.”

The type of plane the Dairyland Aviation team uses is not cheap, and according to Kristin Edwards, can cost upwards of $1.7-million, but is built for just such dedicated and difficult work on often grassy landing strips.

“Special attention is given to crashworthiness (strong, tubular structure, heavy landing gear, airbags in the shoulder-harness, etc.),” Edwards confirmed. “Pilot visibility is very important, so the cockpit has large windows and windshield for this. Maneuverability and light controls are important to reduce pilot fatigue in a long day of flying. Also air conditioning is very important!”

The planes also endure having small seed and fertilizers and other chemicals getting caught in the smallest of crevices, meaning keeping them clean is important.

“(They have) Removable side skins to wash out the plane, easily accessible components like batteries, cables, wiring,” Edwards added. “They make many takeoff and landings from remote airstrips, so they are very rugged and durable.”

The planes truly are air tractors, and are also being considered for military use, but regardless of the machine, the pilot must have a steady hand and be prepared for a long day, and some possibly risky flying.

“We can generally apply it when the winds are up to about 15-mph,” Miller said, noting that the two crews they have apply seed and fertilizer in some pretty tight spots, avoiding tree tops, and flying as low as possible to ‘aim’ the application. “We’ve done some much smaller fields than this.”

He said they are keeping pretty busy of late, with similar contracts, and were off to New Richmond the next day for another cover crop set-up.

The airplane is about to do the final run of the day, as the semi is emptied of seed and the final bushels are loaded, although Erik admits that he had no idea what the final bill will be, he’s happy to have some much cover crop applied in such a small time with literally no impact on the standing crop.

As the Air Tractor’s nearly 1,400-horsepower turbine drums away and spools up for a take-off, Mike Stark pulls off his mask, gloves and goggles.

“I love it. It’s like an air show every day!” Stark joked.