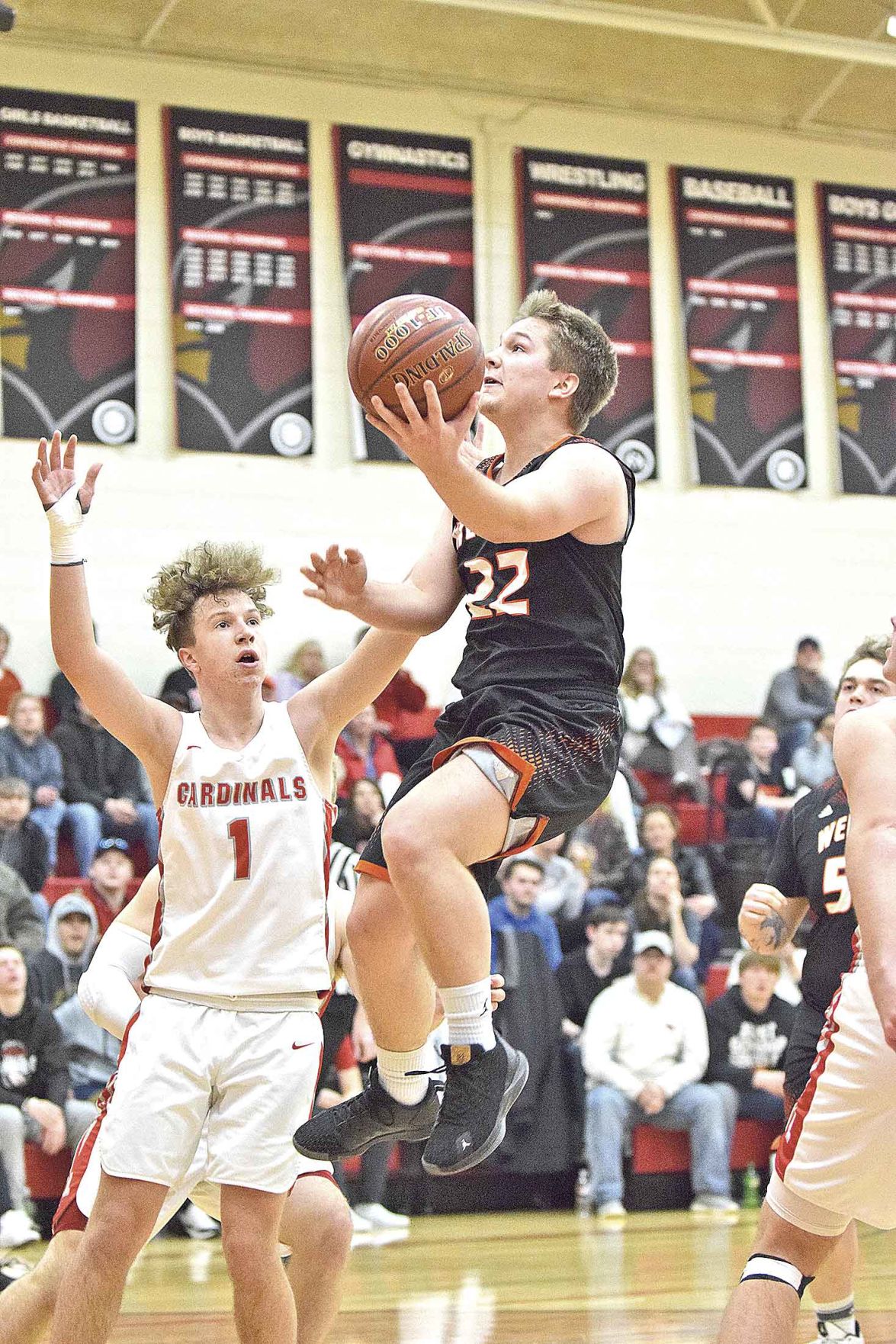 Carsen Stenberg puts up a layup against Luck. 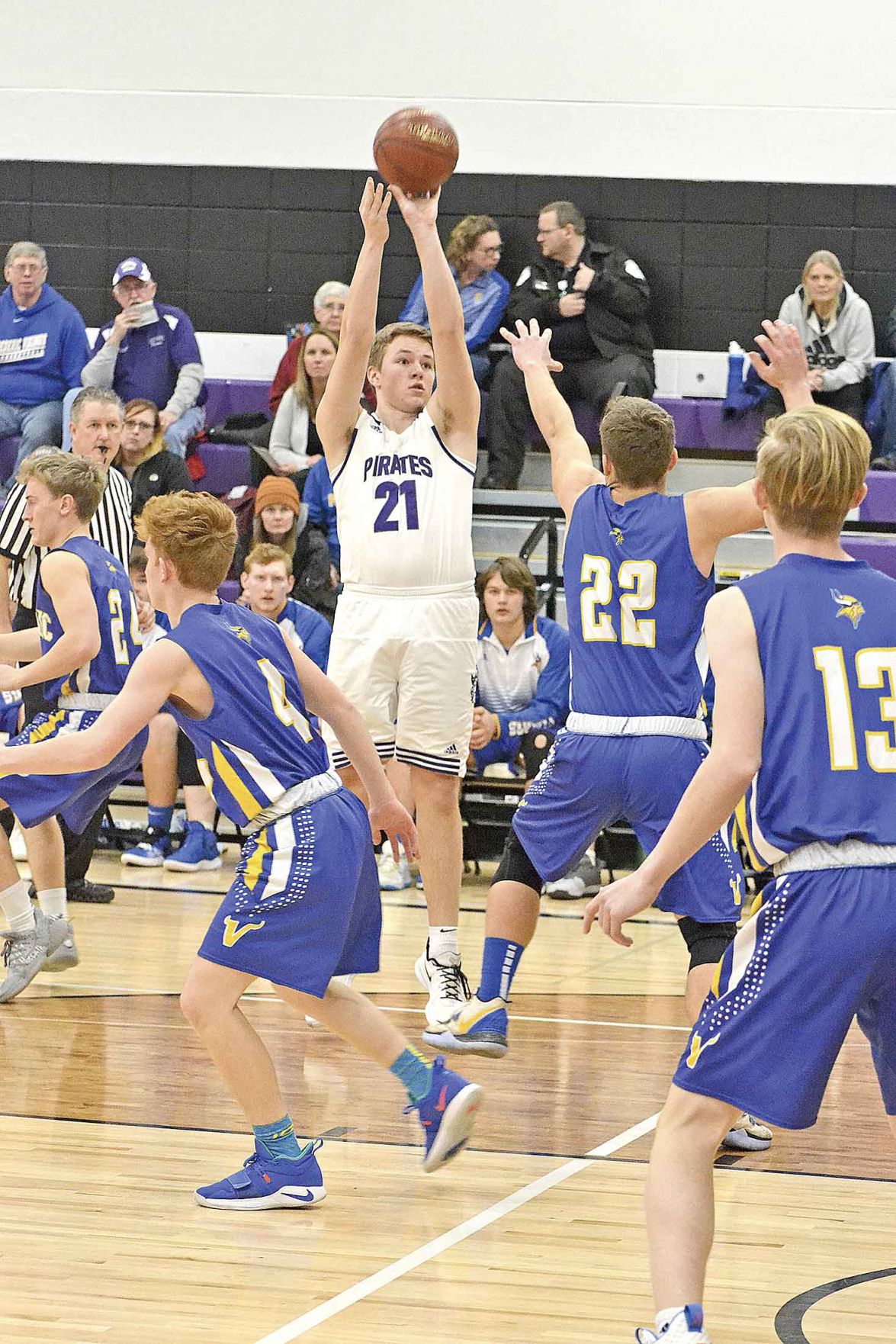 Carsen Stenberg puts up a layup against Luck.

Just one team – Luck – remained undefeated in conference play through four games and though the Tigers entered the Jan. 14 road game with a 2-2 in-conference mark, they held a lead in the final minute and about to move within a game of the Cardinals.

But a late Luck basket and following free throw kept the Cardinals undefeated while sending the Tigers a game further back in the standings.

Harlo Olson sank a go-ahead shot for Webster to take a 53-51 lead late, to which the Cardinals answered with a Carsen Eley basket and free throw to take a 54-53 win. Carsen Stenberg had 19 points for Webster though Luck’s Levi Jensen and Gage Johansen prevented the Tigers from opening a larger lead and grasping the upset win.

Webster held several leads in the first half, including a 22-18 advantage after a Stenberg 3-pointer. The Cardinals responded by scoring the final 11 points of the half to take a 29-22 lead into the break.

Luck’s lead grew to 11 points with a 4-0 run to start the second half and when Stenberg brought the Tigers closer, Jensen countered. The two players traded 3-pointers and baskets until Tallon Parent free throws and a Tanner Pardun basket for Webster made it a 36-31 Luck lead.

With minutes remaining, Parent sank consecutive baskets to dwindle Luck’s lead to 47-44 in the closing minutes and as the Tigers remained three points behind, they went on a 7-0 run to take a 53-51 lead with less than two minutes remaining.

But this go-ahead basket from Olson gave Webster its final points of the game. Luck’s Carsen Eley got the game-tying basket and drew a foul that sent Olson out of the game. Eley sank the free throw, though the Tigers had time for one last shot.

They got the ball to Stenberg for a potential game-winning 3-pointer, but the shot didn’t fall and Jensen got the rebound to preserve the win.

Jensen finished with a game-high 23 points for the Cardinals and Johansen had a game-high 18 rebounds. Stenberg led the Tigers with 19 points while Parent and Washburn had 10 points each.

Luck therefore improved to 5-0 in the conference while the Tigers dropped to 2-3 in the Lakeland West and 5-5 overall. Webster hosts Lac Courte Oreilles this Friday and goes to Shell Lake on Tuesday.

A win by Webster over Luck would also have helped the Pirates move to within a game of the conference lead after they defeated Frederic 55-42 on Jan. 14.

Grantsburg improved to 3-2 in the Lakeland West by limiting the Vikings to one primary scoring option. Adam Dreier led all scorers with 19 points for Frederic though scoring depth favored the Pirates.

Austin Wedin led Grantsburg with 17 points and Sterling McKinley had 14, including 10 in the first half. McKinley sank a pair of 3-pointers before halftime and led the Pirates to a 29-23 lead. Wedin and Jared VanWatermeulen helped secure the win in the second half with Wedin scoring nine and VanWatermeulen adding six.

VanWatermeulen finished with 12 points for Grantsburg and Gus Bergman added six. The win improved the Pirates’ overall record to 6-4 and they host St. Croix Falls this Friday before going to Clear Lake on Saturday and Turtle Lake on Tuesday.

The Dragons entered the week still searching for their first Lakeland West win of the season. Their latest attempt – at St. Croix Falls – was essentially halted before halftime on Jan. 14.

The Saints had 10 players score in the game, including five reaching double-digit point totals in an 81-44 win over Siren. Kullan Parks had a game-high 21 points and 11 rebounds for St. Croix Falls, which turned a close game early into a runaway win.

“We played right with them for the first 10 minutes, (but) they gained the lead going into the half (and) in the second half we struggled to score,” Siren coach Rick Kosloski said.

Riley Churchill scored seven of his nine points in the first half for Siren and Nick Webster added five. But, Parks and teammate Jared Lessman combined for 19 first-half points to guide the Saints to a double-digit lead.

St. Croix Falls then continued scoring in the second half while the Dragons had trouble finding offense. None of Siren’s players had more than one make from the floor in the second, nor reached double-digit point totals in the game.

Churchill and Nick Webster had nine points each for Siren while Nathan Kosloski added six. The Dragons dropped to 1-9 overall and to 0-6 in the Lakeland West; they host Washburn this Thursday and play at Unity on Friday before returning home to host Glenwood City on Monday.