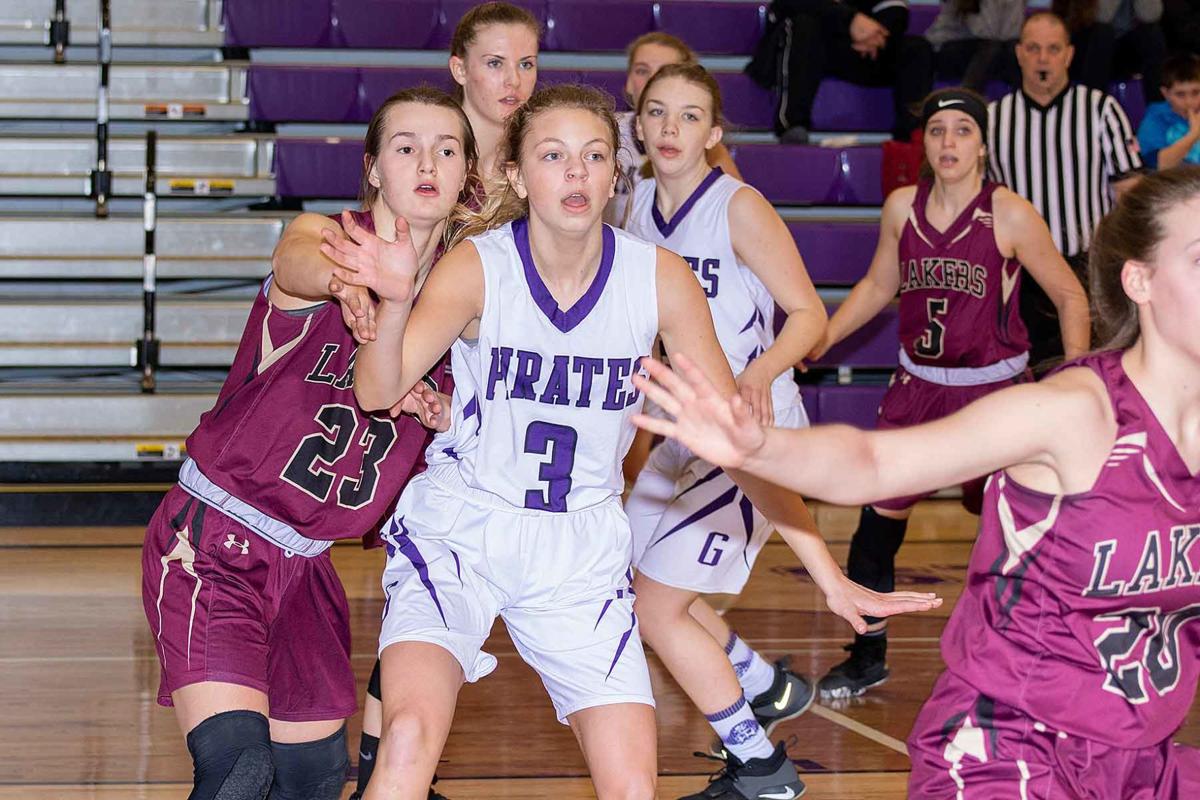 Grantsburg’s Alexis Slater (3) establishes position as she looks for the pass in the Pirates’ win over Turtle Lake. 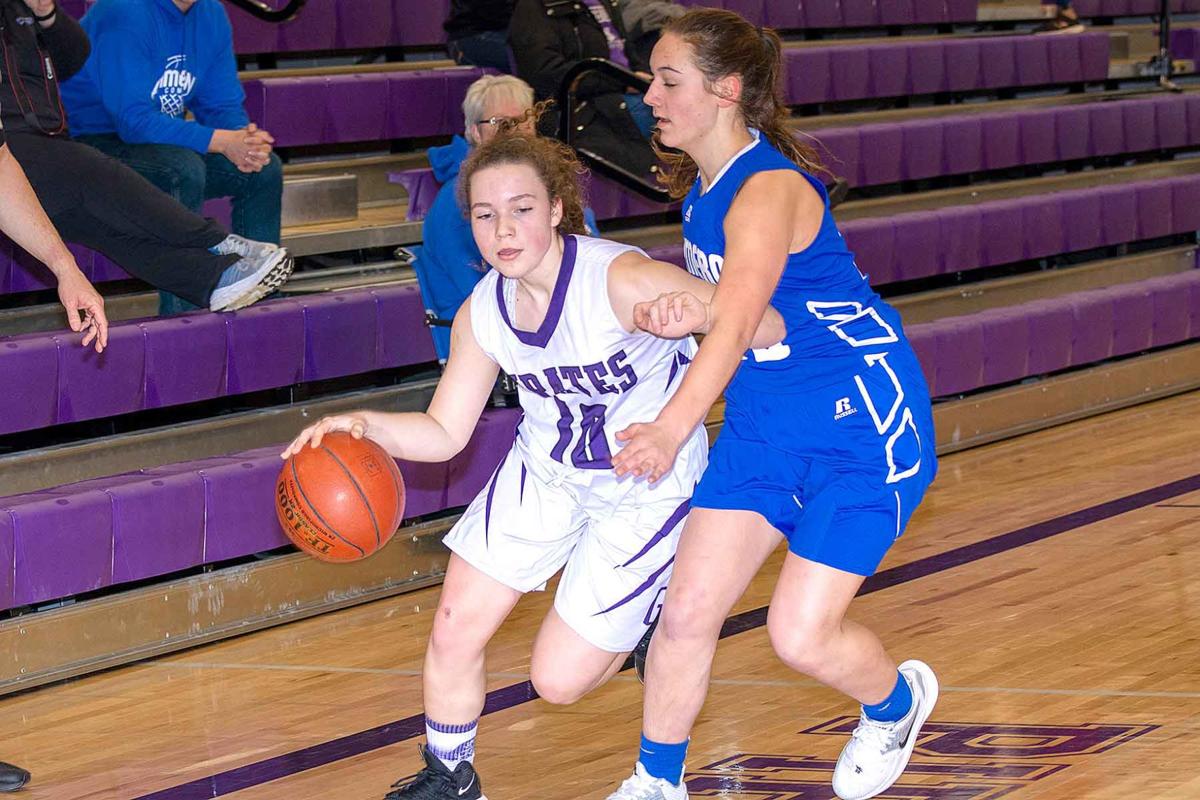 Grantsburg’s Renee Tooze dribbles past the Cameron defender in last week’s win over the Comets.

Grantsburg’s Alexis Slater (3) establishes position as she looks for the pass in the Pirates’ win over Turtle Lake.

Grantsburg’s Renee Tooze dribbles past the Cameron defender in last week’s win over the Comets.

With three games remaining in the regular season, the Pirates wanted to end a three-game losing streak and enter the postseason with a three-game win streak that would have evened their season record at 11-11, along with giving them a share of fifth in the final Lakeland West standings.

Grantsburg was successful in ending their skid with a 37-30 win over Cameron on Feb. 18 and moved within a game of the .500 mark with a 63-48 win over Turtle Lake on Thursday. However, conference runner-up Unity prevented the streak from reaching three by handing the Pirates a 65-25 loss on Friday.

Olivia Ohnstad led the Pirates with 17 points while Brooke Quimby had 13 points and 12 rebounds in the win over Cameron, which was a challenge despite a numbers advantage on the bench.

“We were able to squeak past a depleted Cameron team,” Grantsburg coach Penny Curtin said. “Our two seniors (Ohnstad and Quimby) led the way.”

It was the Pirates’ lowest point total in any win this season and put them one victory from a double-digit win total on the season. That opportunity arrived and was capitalized upon against Turtle Lake, in the Pirates’ second of three games in a four-day span.

Grantsburg’s 63 points was its highest game total this season with Ohnstad scoring a game-high 25 points. She helped the Pirates push their lead beyond 20 points in the second half, though substitutions and an injury allowed Turtle Lake to close the gap late.

“We were up by 22 (points) late in the game and many athletes were able to see the floor,” Curtin said. “This game became very physical and we lost Alexis Slater to a knee injury; we will not be the same team without her.”

Quimby had 15 points for the Pirates and Madison Schafer added 14.

But they were without the luxury of a large late lead on Friday, as the Eagles stopped the Pirates from obtaining their 11th win on the season.

“We were crushed by a very strong Unity team,” Curtin said. “I don’t know if we were just tired after having two physical games that week, but we got outplayed in every aspect of the game.”

Unity built a 14-0 lead before Grantsburg got on the board and its lead wasn’t challenged for the remainder.

Grantsburg enters the postseason with a 10-12 overall record and hosts Chetek-Weyerhaeuser on Tuesday.

The Dragons do take a three-game win streak into the postseason after earning wins over Washburn and Shell Lake in the final week of the regular season.

Siren held Washburn to just 14 first-half points in a 58-34 win on Feb. 18. Hannah Lemieux scored a team-high 11 points to lead 11 Dragons’ scorers in the game. Lindsay Liljenberg had eight points; Angel Lightfeather had seven while Jaidyn Jewell had six.

On Thursday, Siren got a game-high 27 points from Liljenberg in a 64-59 win over Shell Lake. The Dragons trailed by four points at halftime but scored 37 second-half points to take the eventual win. Vinni Rightman had 12 points and Morgan Shetler added 10.

Siren’s 14-7 overall record was enough to earn a first-round playoff home game against Bayfield this Tuesday. The Dragons finished 5-7 in the Lakeland West, putting them in a tie for third with Luck.

A 64-37 win over Winter on Thursday broke the Tigers’ two-game losing streak before they start postseason play at Mellen this Tuesday.

Hannah McDowell scored a game-high 25 points for Webster, making seven of the team’s eight 3-pointers. Grace McCool added 11 points to help the Tigers get the win despite a 28-for-71 team performance from the floor. Jenna Gomulak had eight points and five rebounds while Brooke Hetfeld and Morgan Mulroy had six points each.

Webster finished the regular season with a 7-15 overall record and a 3-9 mark in the Lakeland West, putting it in a tie with Grantsburg for sixth in the final standings.