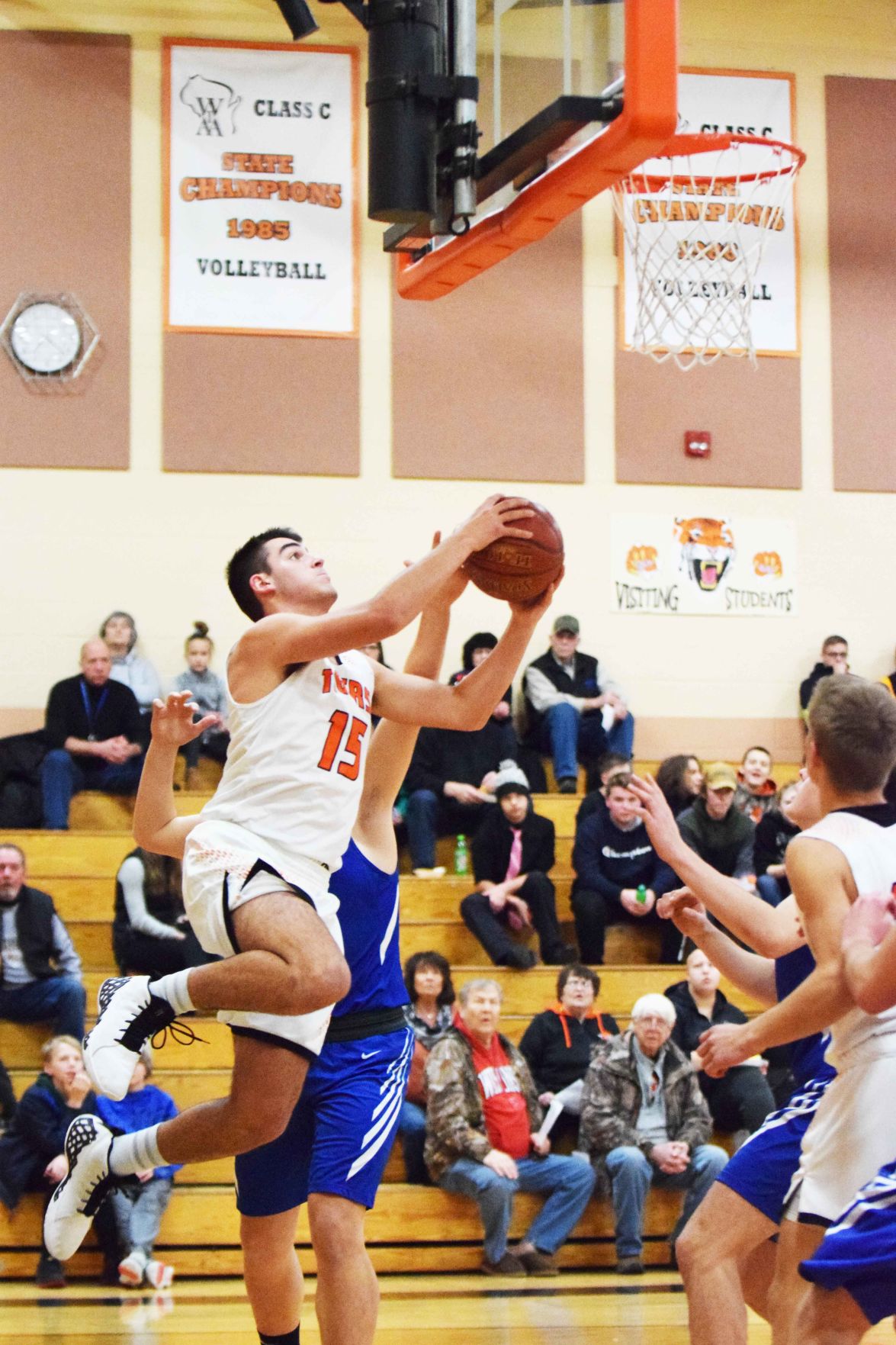 Tiger’s Tallon Parent shows off his skills going up for a layup against St. Croix Falls. 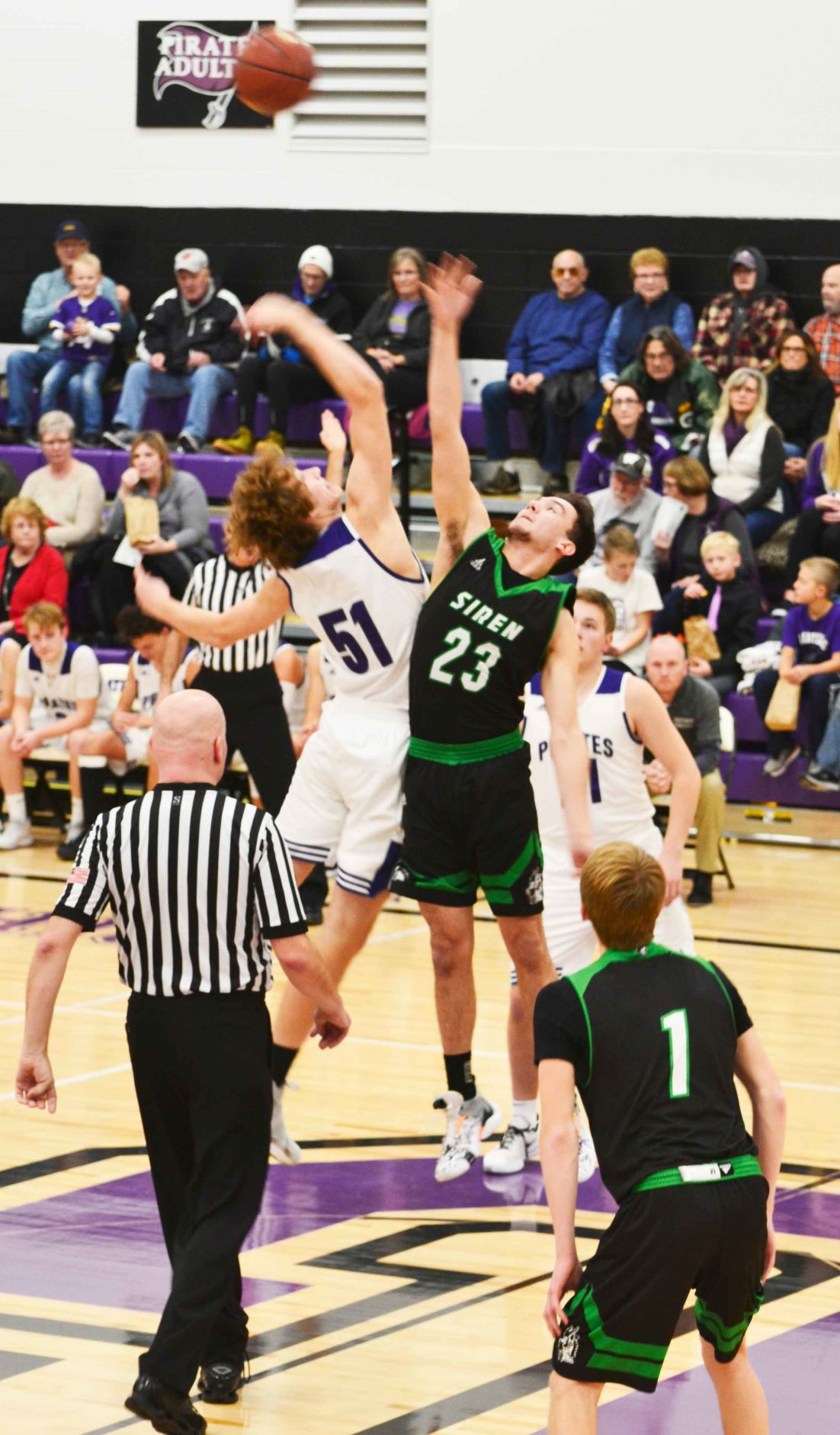 Pirates’ Jared VanWaterMeulen goes up against the Dragon’s Riley Churchill in the opening tip-off. 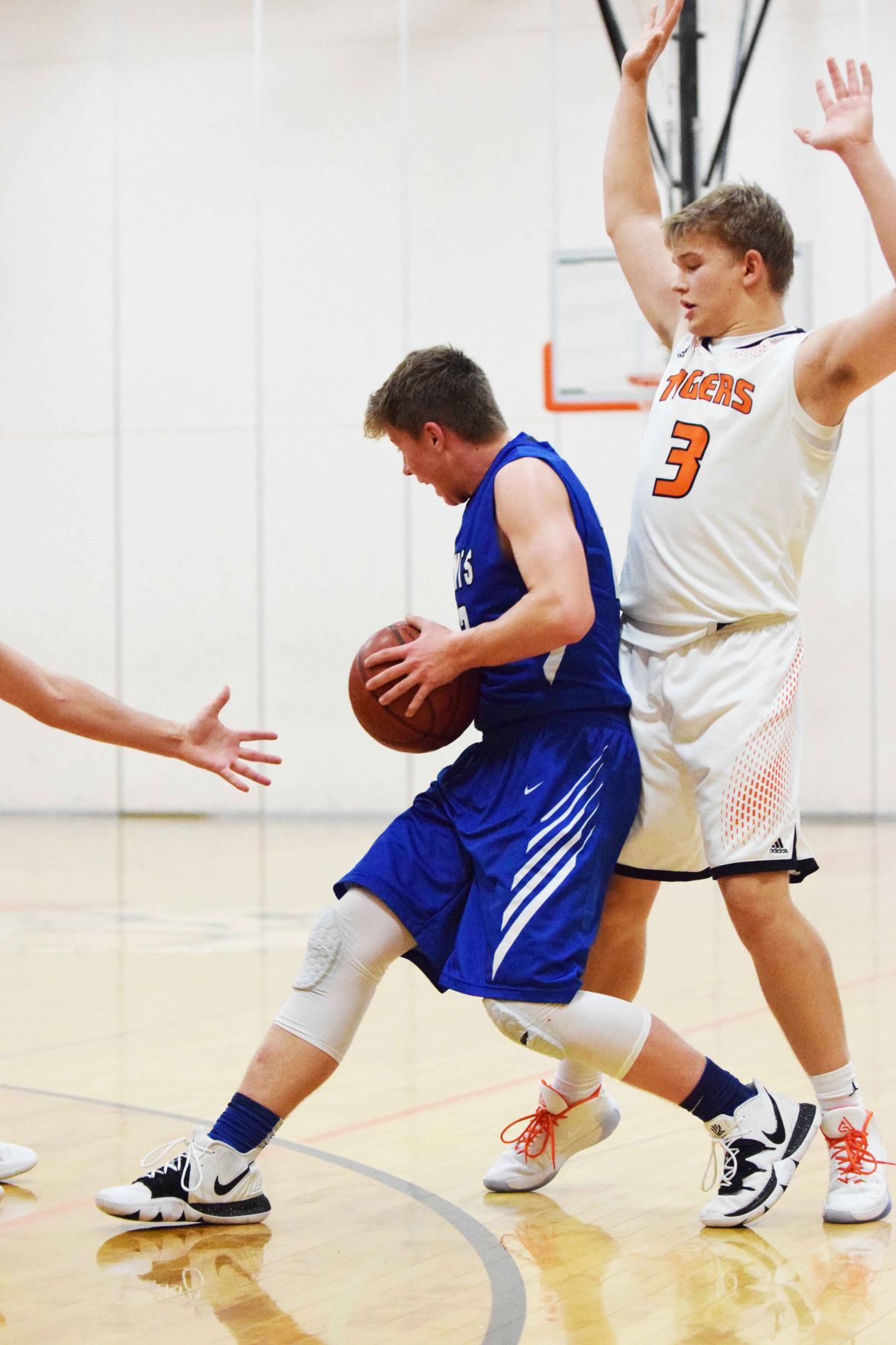 Owen Washburn keeping a SCF players in check while on defense.

Tiger’s Tallon Parent shows off his skills going up for a layup against St. Croix Falls.

Pirates’ Jared VanWaterMeulen goes up against the Dragon’s Riley Churchill in the opening tip-off.

Owen Washburn keeping a SCF players in check while on defense.

GRANTSBURG – The Grantsburg boys basketball team remains a game behind Luck for the lead in the Lakeland West standings as January approaches.

While the Cardinals improved to 3-0 in conference play and St. Croix Falls remains second after giving the Pirates their only conference loss so far, the Pirates moved to 2-1 in the Lakeland West with an 81-59 win over Siren on Dec. 17.

Austin Wedin had a game-high 26 points, including 16 in the second half, while Gus Bergman added 18 for the Pirates. And as they limited Siren’s scoring in the first half, the Pirates already were productive at the free throw line.

Wedin scored six of Grantsburg’s 12 first-half free throws, helping build a 38-23 lead before halftime. Riley Churchill was one of two Dragons with more than one make from the floor in the first half, scoring eight of his team-high 21 points. He also had one of Siren’s two 3-pointers before halftime.

The Dragons got the needed scoring increase in the second half though the Pirates matched it. Wedin scored 12 of his second-half points from the 3-point line and Zach Miller had all seven of his points after halftime for Grantsburg.

Siren did have second-half success from 3-point range but lacked scoring elsewhere. Dante Baker sank two 3-pointers for the Dragons while Brady Kosloski, Zayden Anderson and Jordan Webster had one each.

Jared VanWatermeulen added 14 points for Grantsburg and Carson Knutson finished with 12 points. Nick and Jordan Webster had seven points each for Siren.

The Pirates again had success at both the 3-point line and free throw line on Thursday, in a 69-52 win over Osceola. Knutson and Wedin scored 16 points each for Grantsburg, which went to the line often in both halves.

Grantsburg scored 11 first-half points at the free throw line while sinking four 3-pointers. Only the scoring from Josh Mork helped keep the Chieftains within 10 points entering halftime. He scored 11 of his team-high 15 points in the first half though his teammates totaled just four makes from the floor.

The Pirates made 12 free throws in the second and Wedin scored 10 of his points after halftime. Bergman added 13 points.

Grantsburg improved to 5-1 overall and plays at Somerset on Jan. 3.

The Dragons are still searching for their first win of the season and have one remaining opportunity to obtain it in 2019.

Following their loss at Grantsburg, the Dragons played at Turtle Lake on Friday and took a lopsided loss despite trailing by just two points late in the first half.

“We kept the game close in the first half and were only down 26-24 with about five minutes to play,” Siren coach Rick Kosloski said. “But we quickly lost the edge and were down by 20 entering the half.”

Turtle Lake had no trouble scoring in the second half and finished with the 86-47 win. Riley Churchill led Siren with 19 points, though points were elusive to Siren after halftime.

“In the second half we struggled to score and Turtle Lake was hot,” Kosloski said. “They are the best shooting team we have faced.”

The Dragons host Prairie Farm this Friday and then play at Bayfield on Jan. 3.

The Tigers were the beneficiary of one second-half run after falling victim to one earlier in the week.

But, the Tigers held the second-half scoring advantage on Thursday to finish with a 63-49 win over Bruce that gave them a second win on the season and ended a three-game skid. They held Bruce to just 14 points in the first half and then scored 40 points in the second half.

Webster improved to 2-4 overall on the season and hosts Birchwood on Jan. 3.