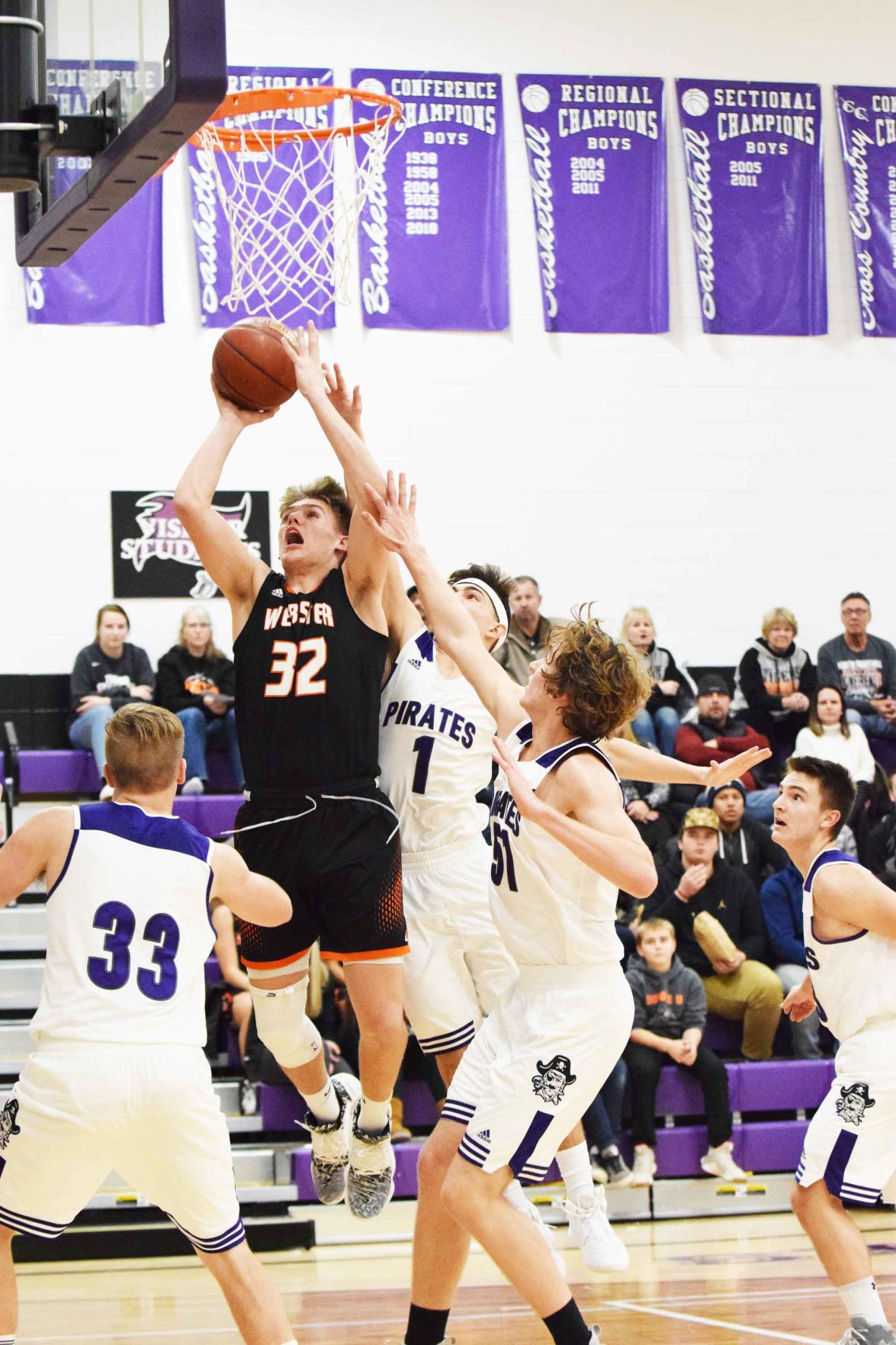 Coleton Peterson goes up for a basket surrounded by Pirate defenders. The Pirates beat the Tigers by a slim margin of 68-62. 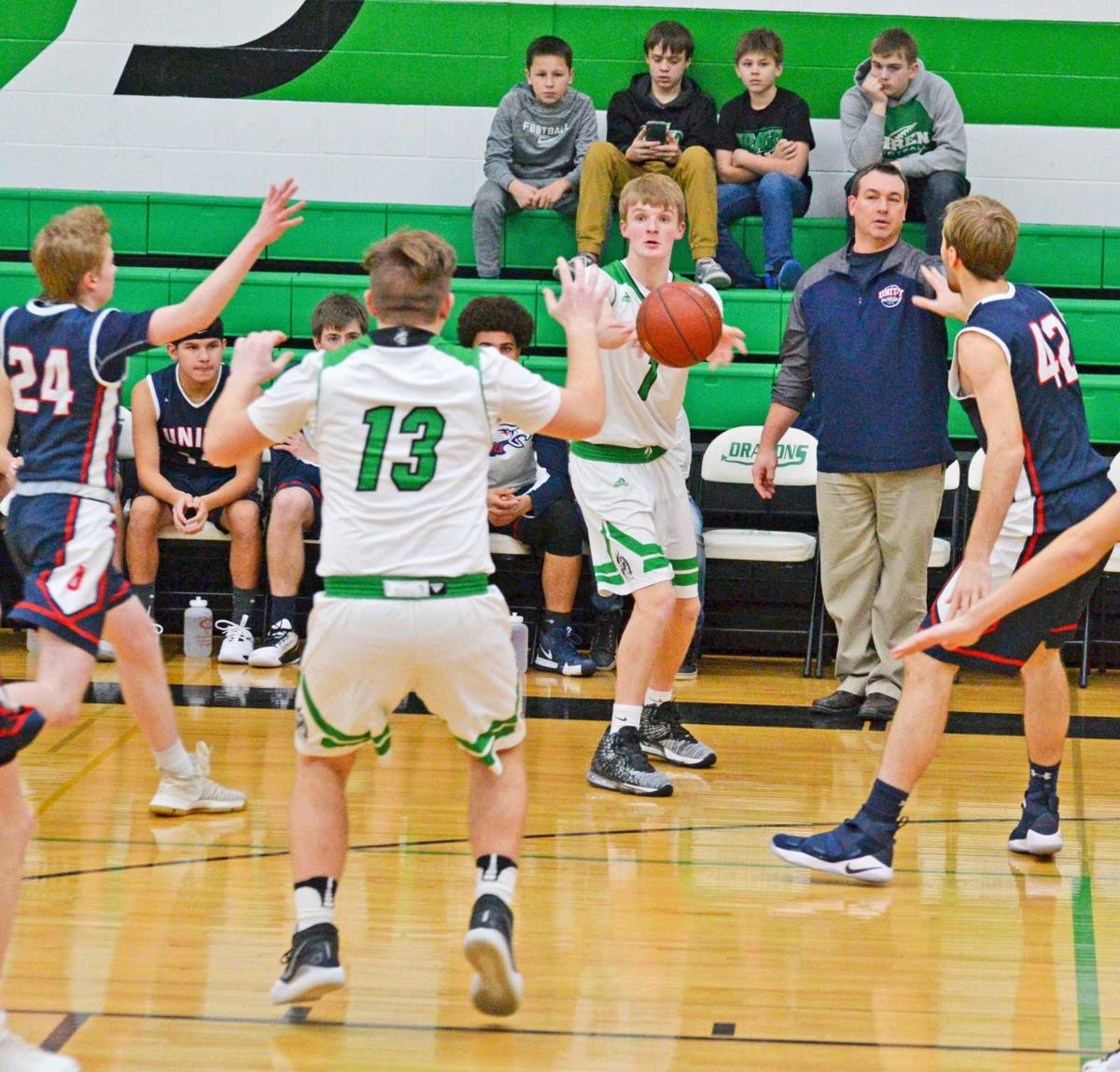 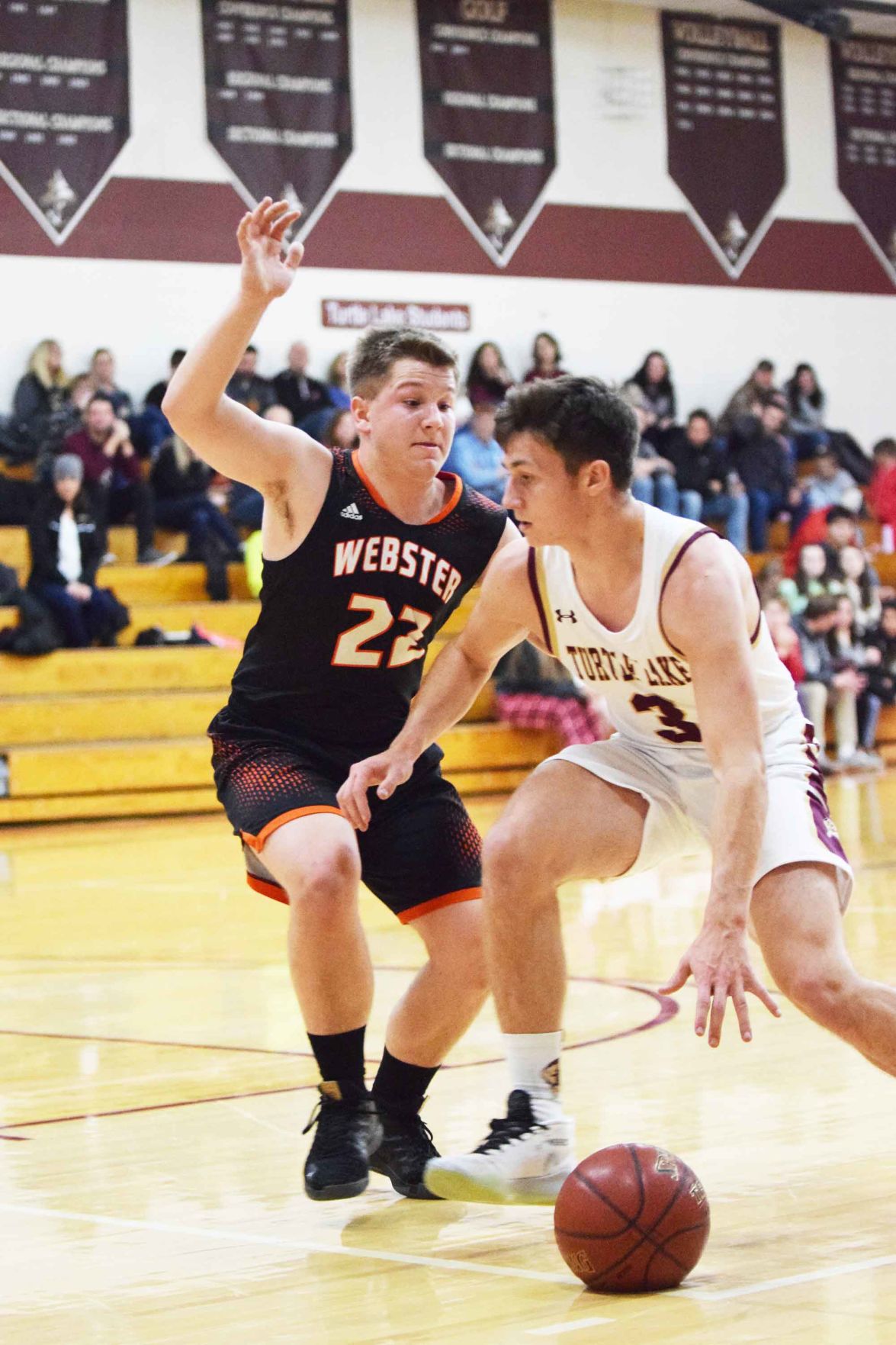 Coleton Peterson goes up for a basket surrounded by Pirate defenders. The Pirates beat the Tigers by a slim margin of 68-62.

GRANTSBURG – Both the Grantsburg and Webster boys basketball teams are in the Lakeland West win column.

While the Tigers earned theirs earlier this month, the Pirates needed a home win on Dec. 10 to avoid a 0-2 in-conference record. Grantsburg got that win by limiting Webster’s scoring options and sinking five 3-pointers in the game for a 68-62 win. The Pirates had four players reach double-digit point totals, which were needed to counter the Tigers’ scoring from Coleton Peterson.

Zach Miller led the Pirates to an early lead by scoring 11 of his 15 points in the first half. With nine more from Carson Knutson and seven from Austin Wedin, the Pirates opened a double-digit lead though Peterson’s 12 first-half points minimized Grantsburg’s lead and allowed for a second-half comeback.

The Pirates started the second half with a 34-21 lead but Peterson and Tallon Parent helped Webster shrink that differential. Peterson scored 21 second-half points, including three 3-pointers while Parent scored eight. But, the Pirates continued to score from behind the 3-point line and eventually at the free throw line.

Peterson finished with 33 points; Parent and Owen Washburn had 10 points each.

The Pirates had just one player with more than one make from the floor in the first half and fell behind by 18 points before halftime of a 76-46 loss.

Jared VanWatermuelen scored 14 of his team-high 16 points in the first half but Grantsburg got just 10 points from the rest of the roster before halftime. Sterling McKinley scored all seven of his points in the second half for the Pirates.

Webster faced Turtle Lake on Thursday and also took a road loss, 62-57. The Lakers had to hold-on at the end despite taking a 40-24 lead into halftime.

The Dragons were minutes from their first win of the season on Dec. 10, but a late Frederic run and crucial foul call led to a 66-60 loss.

Siren held an 11-point lead with eight minutes remaining in regulation before the Vikings slowed the Dragons’ offense.

“We were running well offensively and I was quite confident we had Frederic on its heels.”

Frederic closed the gap with a 7-0 run and later capitalized on a technical foul, that led to a five-point trip down the court for the Vikings. That made the lead change hands and Frederic got the come-fromt-behind win.

“If we could have controlled the situation for another minute and a half, (Frederic) would have folded,” Kosloski said.

The Dragons’ offense was drastically slowed by Unity on Friday, in a 38-24 loss. They managed just 10 points in the second half and were unable to eliminate the Eagles’ seven-point halftime lead. Making matters worse, both Brady and Nathan Kosloski fouled out with seven minutes remaining, leaving the Dragons with even fewer offensive options.

“We’ve been putting-up 60 points a game, so to finish with 24 points is disappointing,” Rick Kosloski said.

The loss dropped Siren’s record to 0-4 overall; the Dragons play at Turtle Lake this Friday.