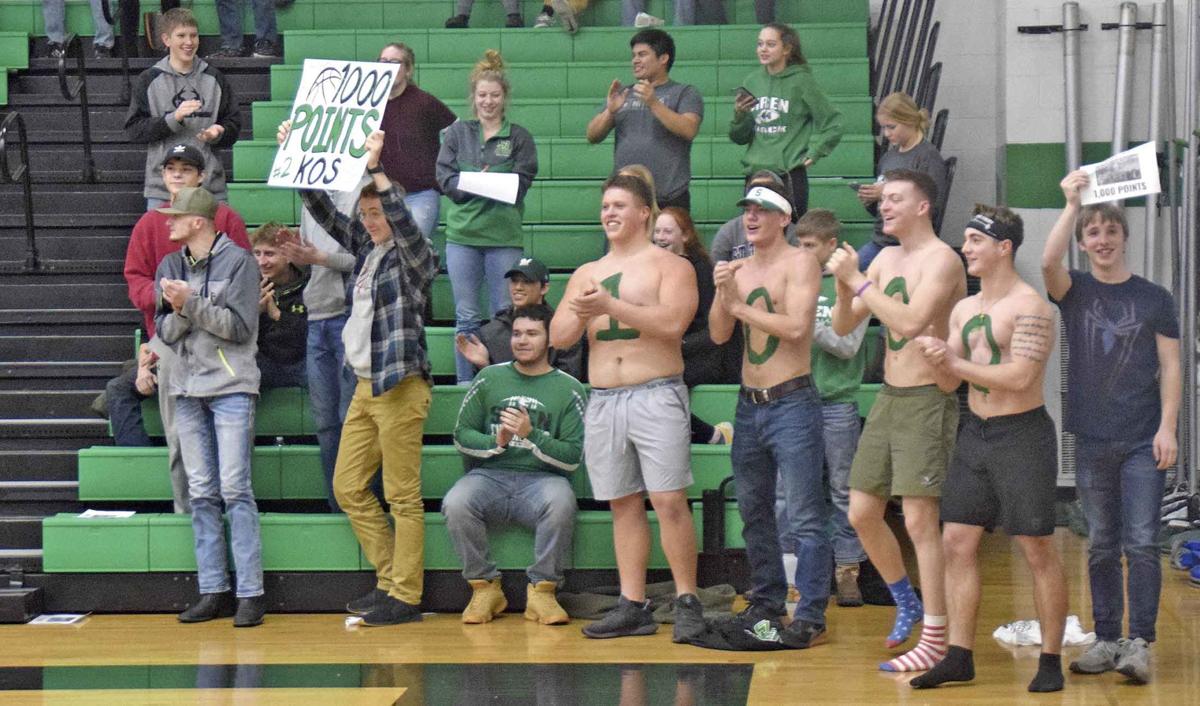 Kosloski had a group of fans cheering him on as he got to 1,000 points.

Kosloski had a group of fans cheering him on as he got to 1,000 points.

Kosloski – a senior on the Siren boys basketball team – became the 10th player in program history to reach 1,000 points in his time with the Dragons in their 62-42 win over Glenwood City on Monday. His team-high 13 points put him at 1,004 with several games remaining in the season and Siren’s coach is eager to see how high that total gets before the season’s final buzzer.

“Nathan has definitely been the main offensive threat,” Siren coach Rick Kosloski said. “He is like a tall guard who can bring the ball up the floor and attack from the perimeter.

Rick Kosloski – an uncle to Nathan – said his nephew is a rare case of a tall basketball player who prefers to initiate play at the offensive end from the outside.

“Nathan doesn’t like to play in the paint, he likes to drive to the paint,” Rick Kosloski said. “He can either pull up for a (3-pointer) or drive to the lane and attack the basket.”

Nathan has often been Siren’s leading scorer this season, which has been a challenging one for the Dragons. His uncle Rick was made interim coach not long before the season started, therefore minimizing the amount of preseason time for players to adapt to a different philosophy.

“We’re definitely developing an identity and learning where each other is on the court,” Rick Kosloski said. “We’ve put our individual prides aside and starting to play team basketball.”

The team’s progression was highlighted by a game last week against Frederic, where Nathan again led the team in scoring. His team-high 16 points helped the Dragons obtain their first Lakeland West win of the season with a 41-35 decision over the Vikings. He followed that with a team-high 22 points in a 66-53 win over Washburn, which gave Siren its first consecutive wins of the season.

The effort by Siren’s leading scorer this season has convinced his coach and likely other coaches in the conference, that Nathan is included in the top group of players in the Lakeland West this season.

“He’s certainly a candidate for (top conference player),” Rick Kosloski said. “His ability to shoot from the outside and drive to the basket definitely makes him one of the top three players in the conference.”