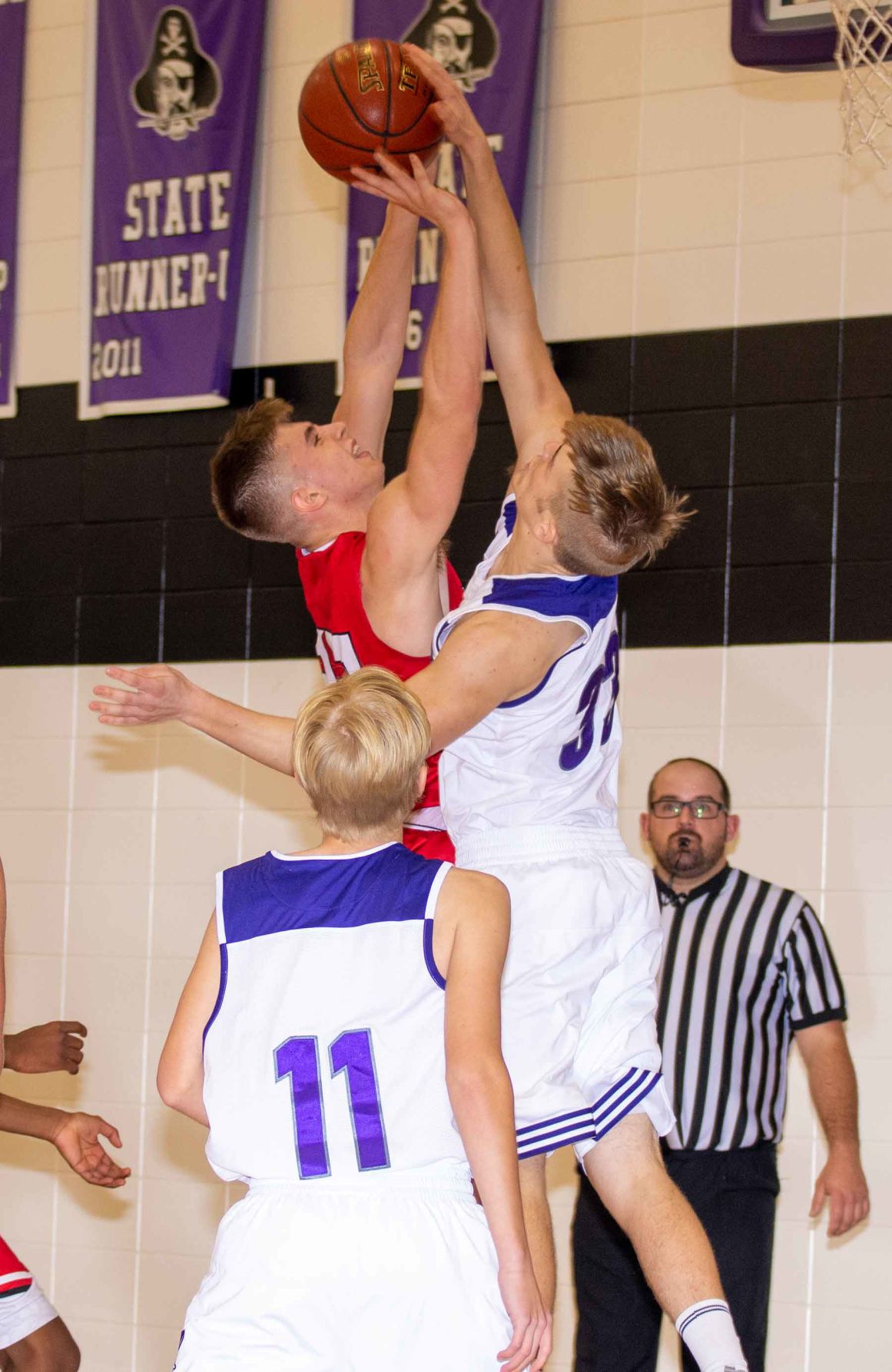 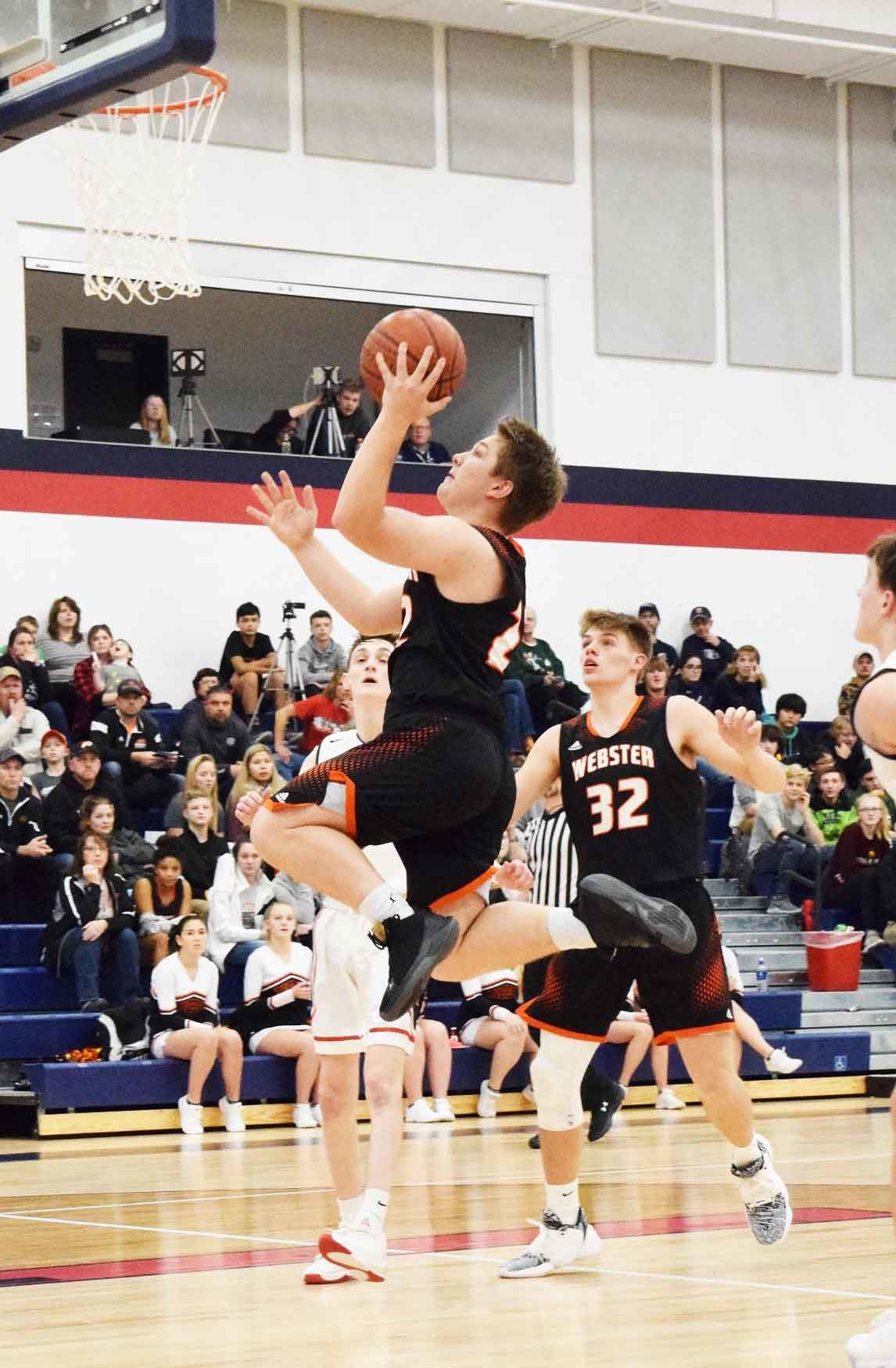 Carsen Stenberg slashing to the basket late in the game against Unity.

Carsen Stenberg slashing to the basket late in the game against Unity.

BALSAM LAKE – The location of Thursday’s game and its placement on the schedule were added bonuses for the Webster boys basketball team.

A road win in conference play just weeks into the season added to the potential satisfaction of defeating a team expected to at least compete for the Lakeland West title.

“A lot of people picked Unity to win the conference, so to go on their deck and get a win is huge for our team,” Webster coach Rob Scherrer said.

That major accomplishment was obtained, as the Tigers outscored the Eagles 25-18 in the second half of a 46-41 victory, getting them in the win column for the first time this season. Coleton Peterson scored a game-high 14 points and Tallon Parent added 13 for the Tigers, both contributing to the team’s long-distance scoring in the second half.

But, the Eagles had their share of leads and didn’t allow Webster to get too far ahead when it was in front. Cullen Feist scored six first-half points while Zach Collins and Dan Sorensen added five points each. However, limiting Jaxson Flaherty to just three points was important for Scherrer and the Tigers.

Flaherty had three points in the first half yet the Eagles still led 23-21 entering the break. Webster erased that advantage in the second half by getting 11 second-half points from Parent and four 3-pointers from the team.

“Ultimately, we made more plays than Unity down the stretch to secure a nice road win,” Scherrer said.

The win helped the Tigers get even on the season after dropping their season opener 69-36 at home to Somerset.

Carsen Stenberg finished with 11 points; nine came from first-half 3-pointers for Webster, which evened its season record at 1-1. The Tigers play at Turtle Lake this Thursday and host St. Croix Falls on Tuesday.

The Pirates entered the second week of the season with a 2-0 record after winning both at home and on the road last week.

They played at Prairie Farm on Dec. 3 and allowed only one Prairie Farm scorer to reach a double-digit point total in a 65-39 win. Gus Bergman scored 10 of his team-high 14 points in the first half while Sterling McKinley had nine, with six of those coming from 3-point range.

McKinley, Knutson and Jared VanWatermuelen finished with 11 points each for Grantsburg; Wedin had 10.

On Thursday, VanWatermuelen led the way to a win over Amery, scoring a game-high 29 points in a 70-44 decision at home.

He had 15 points in the first half while Wedin added long-range shooting, making three 3-pointers in each half. Grantsburg’s scoring duo led the team to a 36-25 lead entering halftime. But 14 more points from VanWatermuelen and 12 more from Wedin in the second half left Amery with no chance to catchup.

Wedin finished with 23 points for the Pirates, who play at St. Croix Falls this Friday and host Siren on Tuesday.

The Dragons were twice denied their first win of the season last week.

After dropping a 60-50 decision at Shell Lake for their season opener on Dec. 2, the Dragons hosted Luck on Friday and did not fare any better. The Cardinals nearly doubled Siren’s first-half point total and maintained a double-digit lead through the second half for a 79-61 win.

Nathan Kosloski scored a team-high 22 points for Siren, but it still couldn’t prevent the Cardinals from extending their lead beyond 20 in the first half. Luck eventually took a 41-22 lead into the break and prevented any potential Siren comeback in the second half.

Brady Kosloski added 13 points for Siren and Riley Churchill added 10. The Dragons host Unity this Friday and play at Grantsburg on Tuesday.