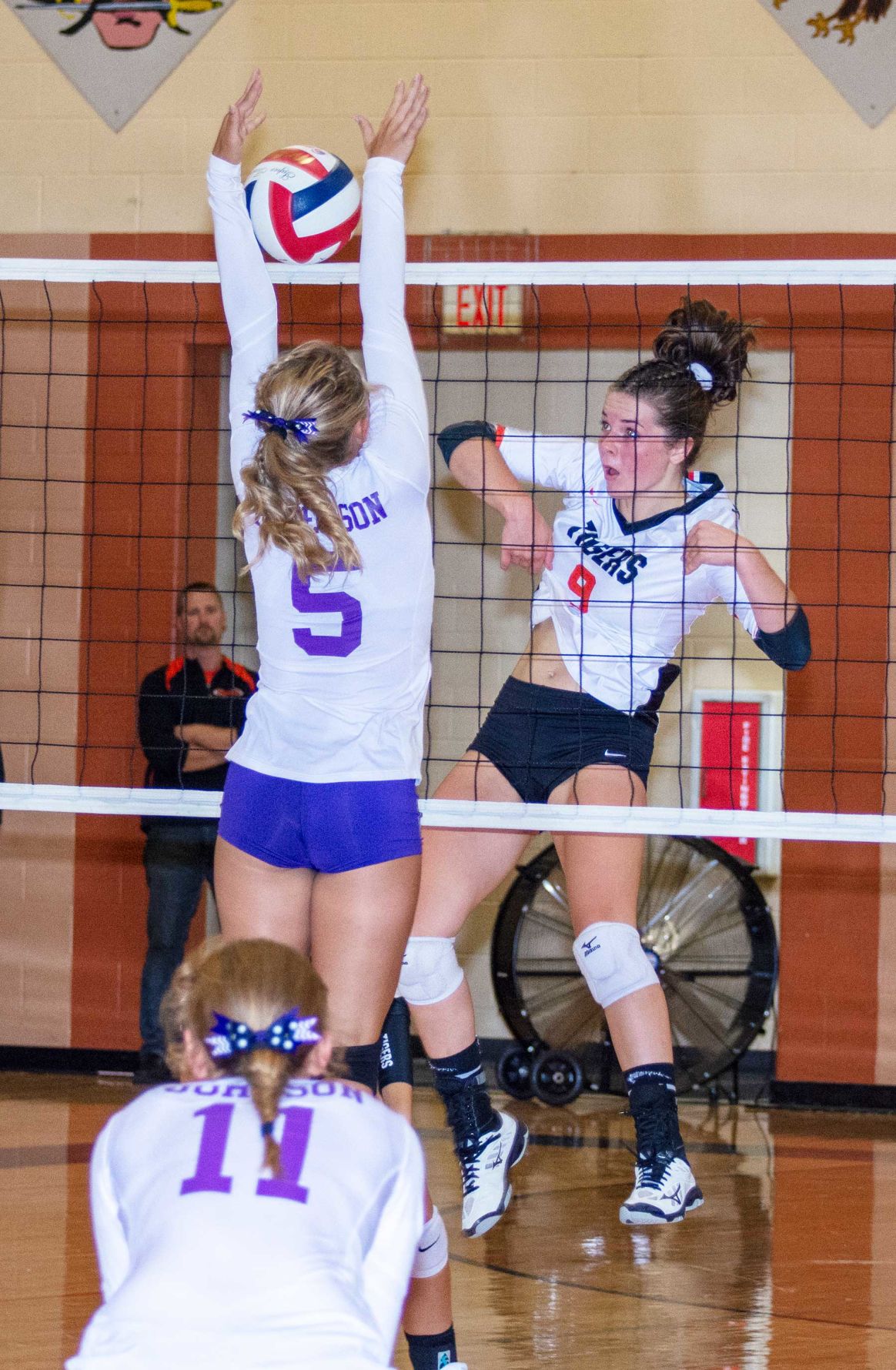 The Tigers' Summer Winkler pounds the ball through the block of Allison Peterson. 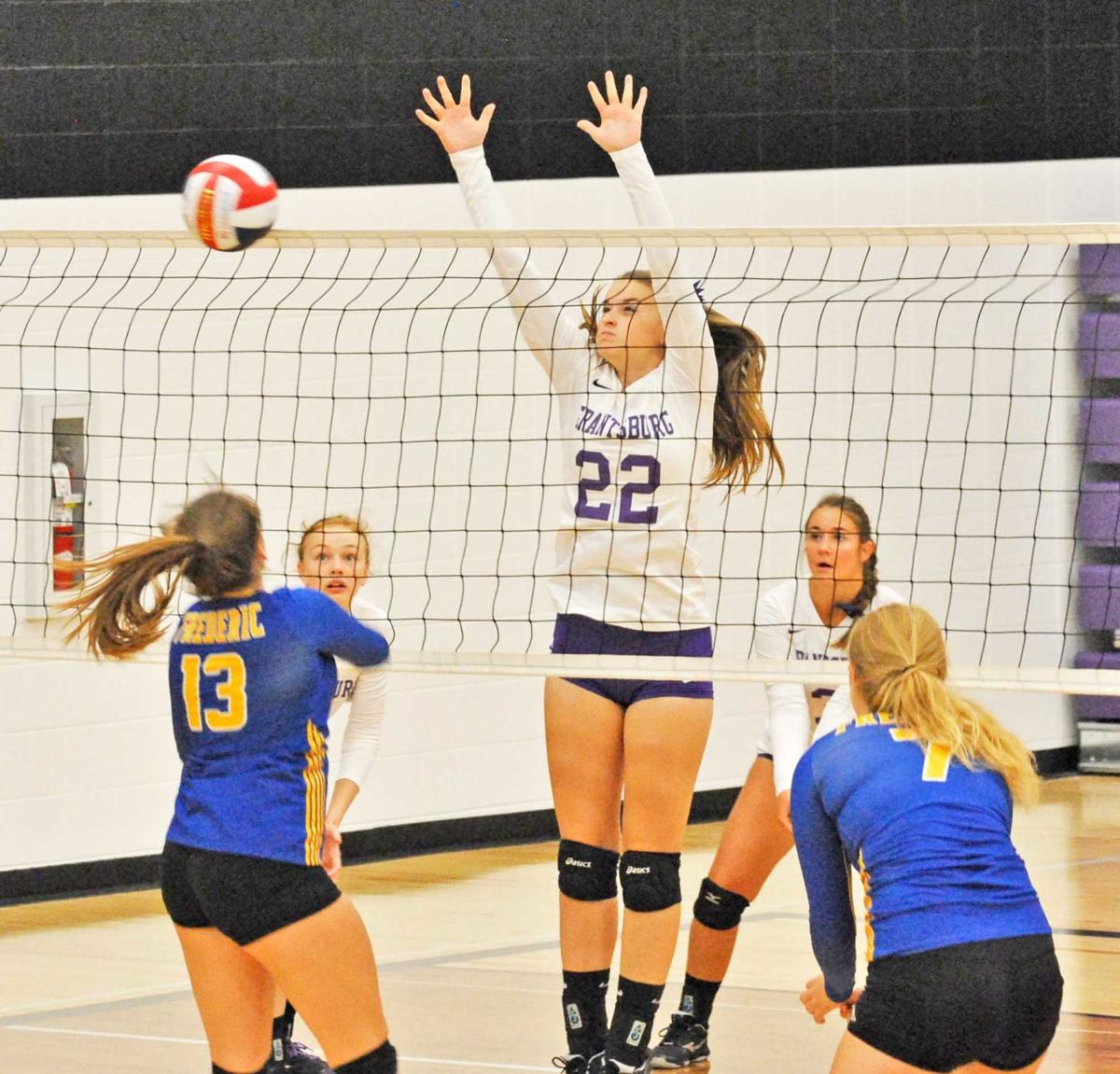 Grantsburg Sophomore Tiffany Gronski goes up for a block against Frederic at the Grantsburg Invite on Saturday.

The Tigers' Summer Winkler pounds the ball through the block of Allison Peterson.

Grantsburg Sophomore Tiffany Gronski goes up for a block against Frederic at the Grantsburg Invite on Saturday.

“With WIAA (Wisconsin Interscholastic Athletic Association) limiting the number of events teams can enter to 15, rather than limiting the number of matches teams play, we are only able to compete in three Saturday tournaments due to the required home and away conference schedule taking 12 of those 15 dates,” Grantsburg coach Deb Allaman-Johnson said.

But with a Lakeland Conference foe agreeing to play in Saturday’s Grantsburg Invitational and count it as a conference event, the Pirates were able to add another tournament to the schedule. Therefore, they bolstered their schedule and earned a conference win while claiming first in their home tournament.

Grantsburg won all four of its matches, including a best-of-five match against Frederic to take the top spot.

“When Frederic comes to our tournament, we miss out on a home match but are able to enter a fourth tournament, giving us around 30-32 regular season matches,” Allaman-Johnson said.

The Pirates earned that win over Frederic and three more on the day without surrendering a set. Raisa Jensen had a team-high 11 digs while Ellie Duncan had 10 assists in their 25-3, 25-12 and 25-10 win over the Vikings.

Hanne Johnson had eight kills and Jensen had 11 digs for Grantsburg in its 25-15 and 25-12 win over St. Croix Central. Brooke Quimby added three aces and Duncan had nine assists.

The Pirates then secured a shot for a 1st-place finish with a 25-12, 25-22 win over Turtle Lake. Olivia Ohnstad had 12 kills while Jensen, Duncan and Quimby had eight digs each. Duncan also had 10 assists in the win.

Grantsburg completed its string of set wins in the final against Mercer, earning the victory 25-14 and 25-17. Johnson had nine kills; Duncan served four aces and Ohnstad had 14 digs.

The tournament sweep gave the Pirates five wins in the week, after they swept Webster in three sets on Sept. 3. They sandwiched a 25-8 win in the second set with 25-13 wins in the other two for another Lakeland win.

Johnson and Ohnstad had eight kills each; Ohnstad and Jensen had eight digs each while Duncan had 10 assists.

“It was our night,” Allaman-Johnson said. “Webster had uncharacteristic unforced errors and I guarantee that will not happen again in future matchups.”

The Pirates play at Siren on Thursday and have a week off before playing at St. Croix Falls on Sept. 19.

Webster recovered from the loss to Grantsburg by earning a 3-2 win over Luck on Thursday. The Cardinals started with a 25-21 win in the first set and added a 25-23 win in the third set. However, the Tigers won the second set 25-22 and forced a tiebreaker with a 25-23 win in the fourth. They then secured the overall win with a 15-11 decision in the tiebreaking set.

Webster plays at St. Croix Falls on Thursday and hosts Unity on Tuesday.