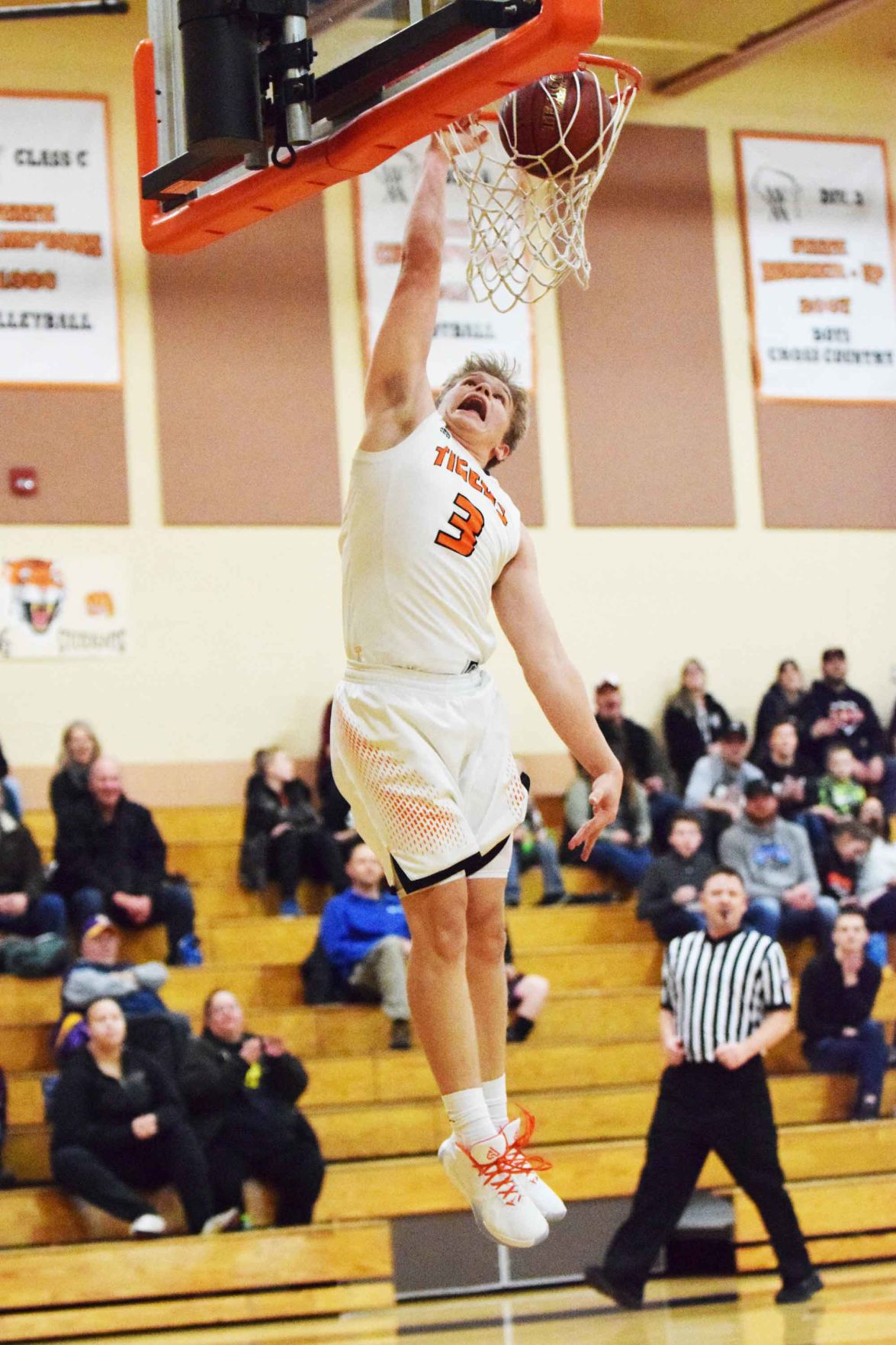 Owen Washburn with a Dunk in the first half. 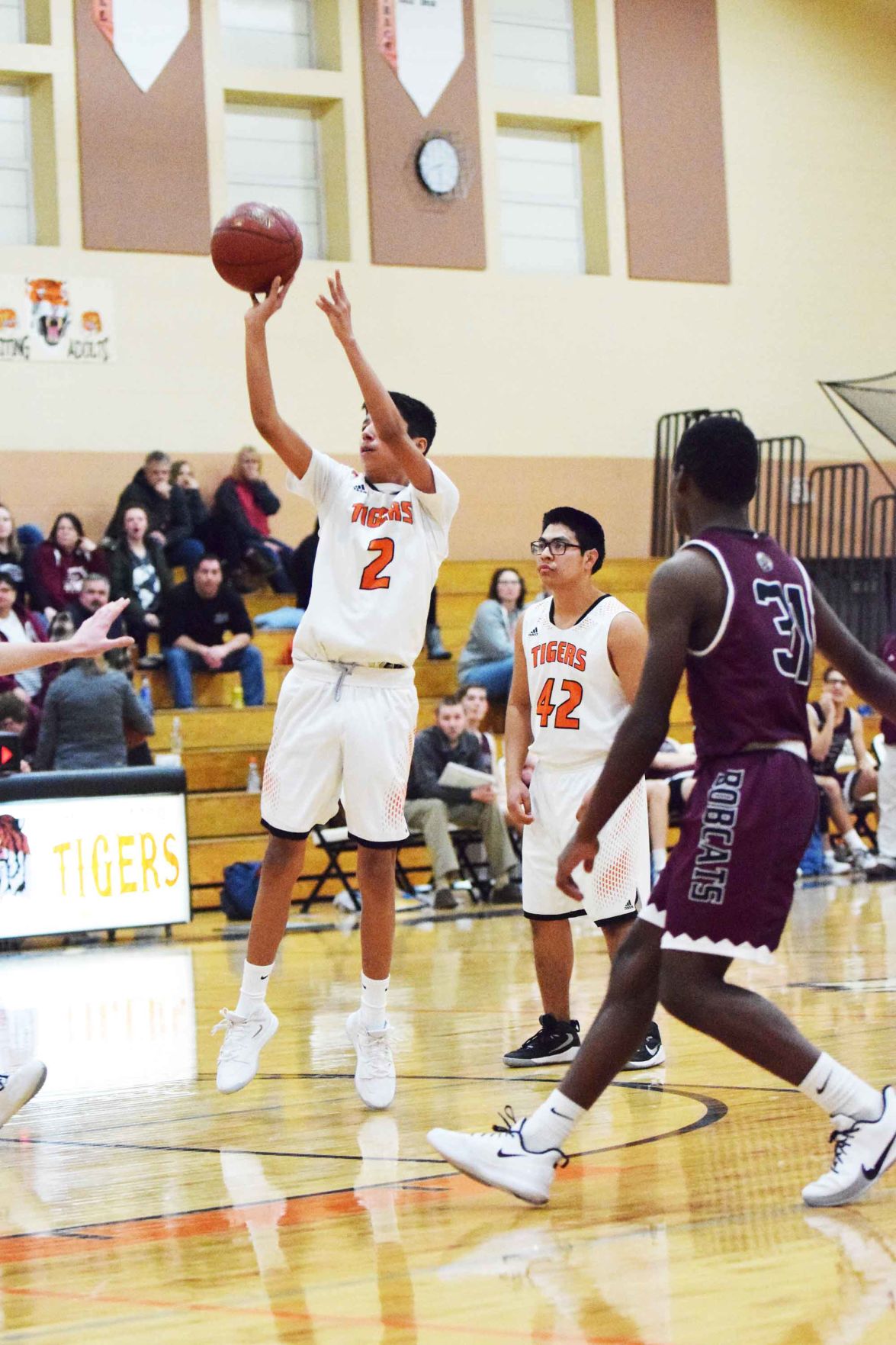 Tiger’s Allen Skinaway puts up a jump shot against the Birchwood Bobcats.

Owen Washburn with a Dunk in the first half.

Tiger’s Allen Skinaway puts up a jump shot against the Birchwood Bobcats.

The Pirates entered the week with a 2-1 in-conference record, trailing only St. Croix Falls (3-1) and conference leader Luck (3-0). They host the Cardinals for their first of two meetings this season and though the Pirates took a loss in their first game of 2020, it fortunately for them was a non-conference game.

Somerset overcame a halftime deficit by sinking five second-half 3-pointers to take a 72-57 win at home last Friday. Ty Madden had a game-high 22 points with 17 coming in the second half; 12 of his second-half points were scored from 3-point range.

The Spartans needed that second-half surge after Jared VanWatermeulen led the Pirates to the lead before halftime. He scored 13 of his team-high 17 points in the first half while Austin Wedin had eight points, including a pair of 3-pointers.

Grantsburg took a 36-33 lead into the break and though three Pirates hit long-range shots in the second half, the Spartans had five between Madden and Melvin Ortiz. Somerset finished the game 8-for-15 from 3-point range.

Wedin finished with 11 points for Grantsburg; Zach Miller and Carson Knutson points each. It was just the second loss this season for the Pirates, who dropped to 5-2 overall.

The Tigers seek to even their conference record at 2-2 this Friday at Siren after posting a season-high point total in a 79-33 win over Birchwood last Friday.

Tallon Parent and Owen Washburn led five Webster double-digit scorers with 16 points each; they also led the team to a 33-point first-half lead. The Tigers allowed just two makes from the floor in the first half and Birchwood scored more than half its points from the free throw line.

“We got off to a great start led by creating turnovers on defense and converting them into easy buckets,” Webster coach Rob Scherrer said. “This team seems hungry and they are showing their resolve.”

Tanner Pardun added 15 points for the Tigers; Carsen Stenberg had 13 and Nathan Stadler had 11, including six of the team’s first nine points of the game.

It was the second consecutive win for the Tigers after they went through a three-game skid in mid-December. They improved to 3-4 overall.

Nathan Kosloski scored a season-high 34 points for the Dragons on Friday but weren’t able to get a second consecutive win.

Siren was coming off a win over Prairie Farm and Kosloski scored 17 first-half points against Bayfield and while the Dragons trailed 34-31 entering halftime, he helped them open a 10-point lead in the second half.

“With three minutes to go we’re up by 10 (but) after two timeouts, we struggled to possess the ball,” Siren coach Rick Kosloski said. “We continue to get better but are still looking for a way to play a complete game.”

Bayfield led by three in the final seconds and the Dragons got a final attempt to potentially force overtime, but the shot didn’t fall and Bayfield got the 62-59 win.

Siren dropped to 1-7 overall on the season and seeks its first in-conference win this Friday against Webster.