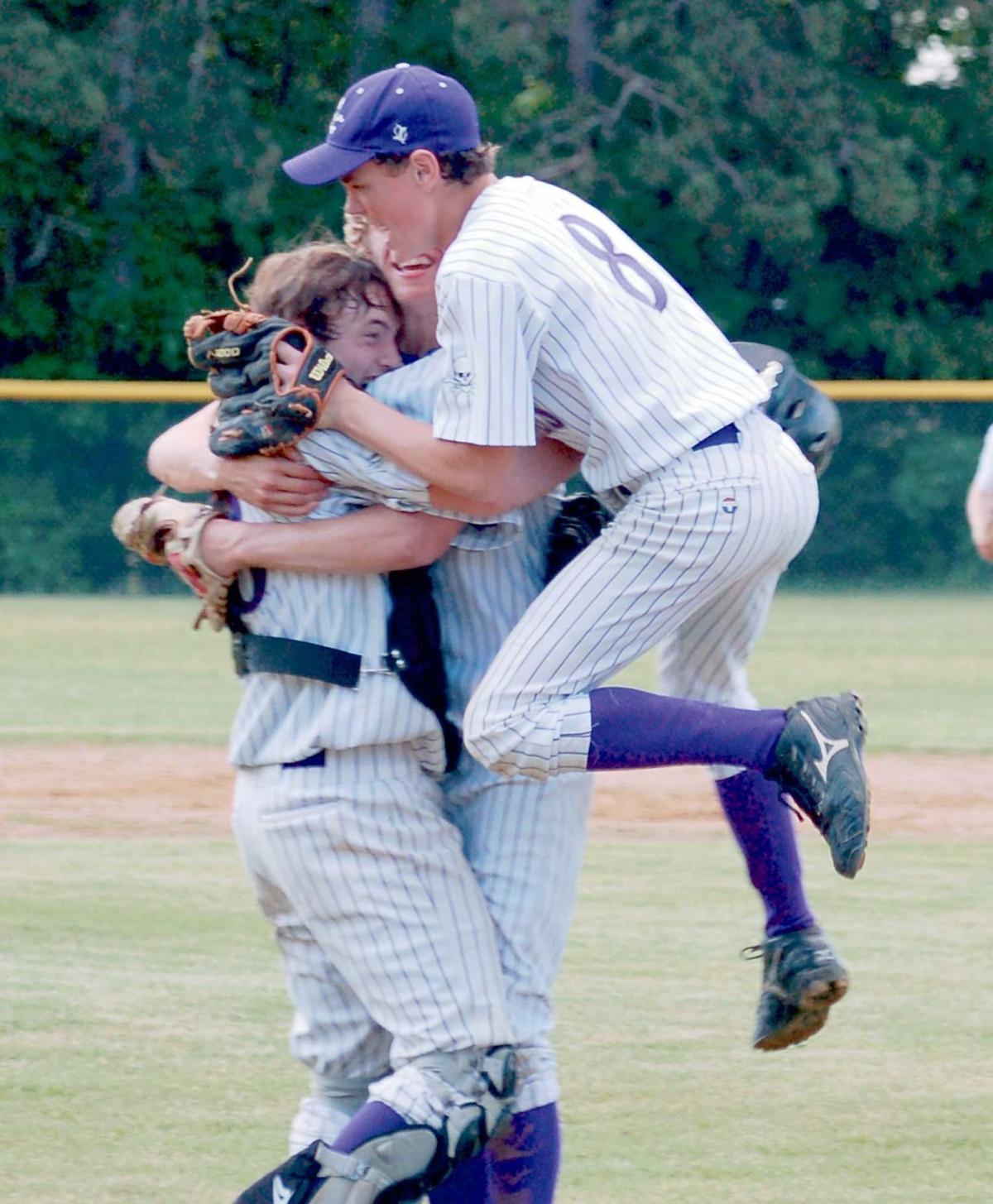 Joe Engelhart (8) joins in the celebration with catcher Russ Thoreen and pitcher Trevor Thompson after defeating Boyceville for the Regional title. 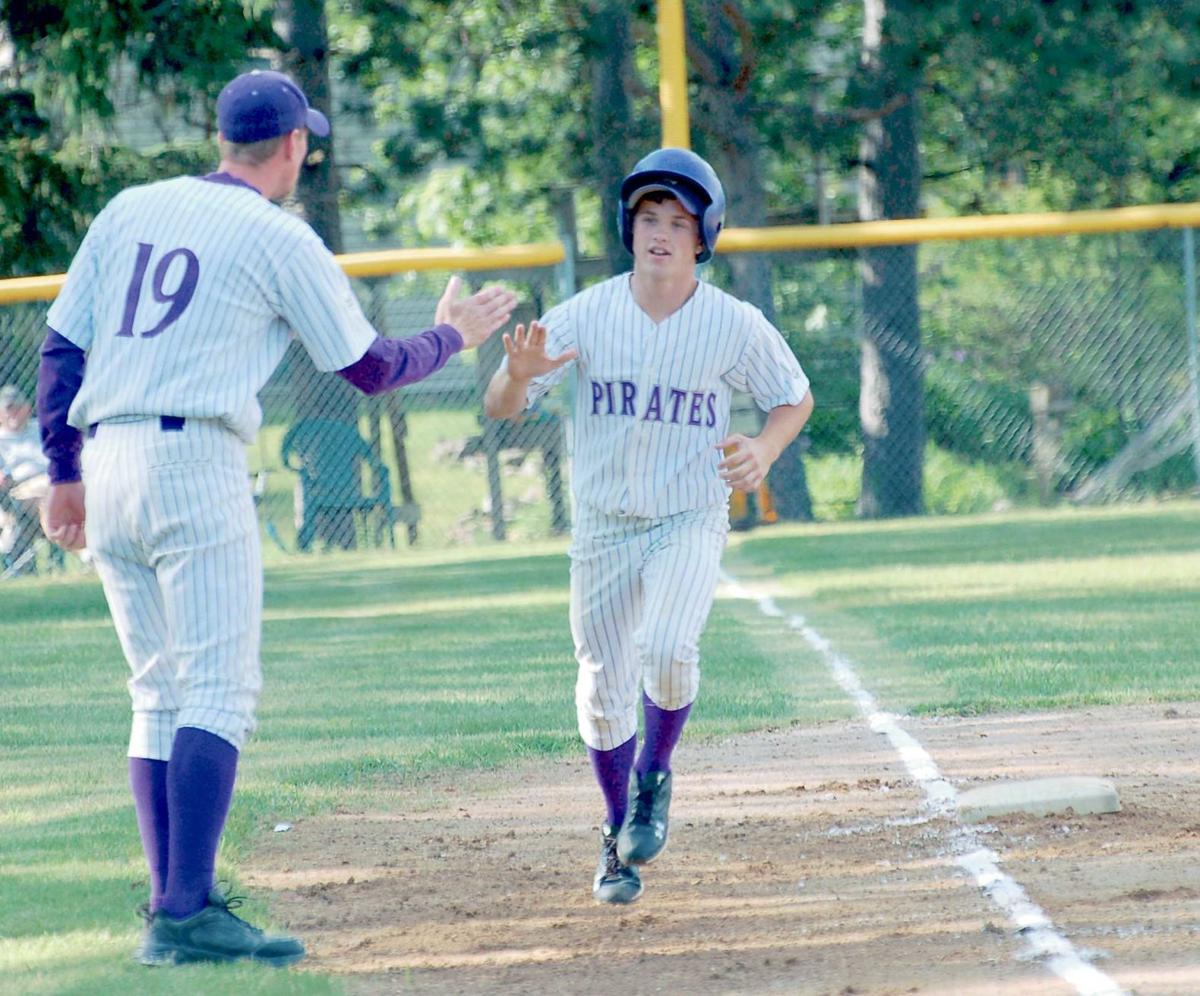 Austin Eskola gets a high-five from head coach Pete Johnson as he rounds third after hitting one out of the park.

Joe Engelhart (8) joins in the celebration with catcher Russ Thoreen and pitcher Trevor Thompson after defeating Boyceville for the Regional title.

Austin Eskola gets a high-five from head coach Pete Johnson as he rounds third after hitting one out of the park.

BOYCEVILLE–– Yes, it seems that the Pirate boys are peaking at the right time of the year. This may be an old saying, but it is something you should look into.

The Pirates jumped on the scoring wagon in the first inning. Daniel Biorn singled to get to first base. Next it was time for small ball. Dylan Marohn sac bunted Biorn to second. But the wheels of Marohn put him safe at first as well. Trevor Thompson hit a fielder’s choice, but again, the speedy feet and a small oops by the Boyceville defense gave the Pirates their first run of the game.

Next to the plate was Austin Eskola. Before this game started, head coach Pete Johnson looked at the field and told Eskola this was his kind of park.

Well it was, and Eskola put a hit on a ball and sent it where no one could catch it- over the outfield fence. This was a three-run home run. The Pirates had a four to zero lead at the halfway point of the first.

The Boyceville Bulldogs answered right back, scoring four runs in their half of the inning. This was on five hits, one hit a double from Ryan Bloom.

The Purple boys didn’t let this slow them down at all for their second at-bat. Gavin Meyer headed to the plate first. He ripped a hard single to get the Pirates leadoff man on the bags.

Next was Biorn and he drew a walk and now there were two on the bases.

Russ Thoreen dug his cleats in next. We need to change Thoreen’s name to “Mr. Double” because that is just what he did again, driving Meyer and Biorn. That was it for Grantsburg in the second.

With a pitching change for the Pirates, the defense was starting to flex a little muscle, shutting down the Bulldogs one-two-three. So at the end of two innings played, the Pirates had a six to four lead.

The third inning saw the Pirates add five more runs and batted all nine players. Jimmy Nelson got things under way with a walk. Joe Engelhart moved Nelson into scoring position but was out at first.

Meyer singled in Nelson for the first run of the inning. Biorn reached on an error and Marohn singled to load the bases.

Thoreen slipped a little and only singled, but scored a run. Nolan Hanson was next and he drove the ball deep into center field, scoring two runs off this hit.

The Pirates scored one unearned run on a passed ball this inning, so at the halfway mark of the third, the score was 11-4.

Nelson made his way back to the mound for his second inning of pitching, and again it was a one-two-three inning for the Pirates on defense. Nelson struck one out, had a line-drive hit to Engelhart at second, and one long ball hit to Cole White out in right field. Both of these balls were caught with ease.

Grantsburg added another run in the fourth. Meyer walked and then stole second. Biorn was next. He drove in Meyer with a standup double. 12-4 was a score at this time and the Pirates were just flying. Hanson took over pitching duties for the Pirates at the bottom of the fourth. Again it was a one-two-three inning for the Bulldogs.

The Pirates didn’t score again during this game, and one could tell the arms of Nelson and Hanson were tired from pitching the day before. Each pitcher saw limited time on the mound.

The Bulldogs did score three runs in the bottom of the fifth, so it was time to put in the closer, Trevor Thompson. With a short warm-up time allowed, Thompson worked quickly through the Bulldog line-up to end the game.

Like things should be, the final out was recorded on a come-backer to Thompson, over to Seth Coy at first, and the Regional Championship trophy was heading to Grantsburg with a final score of 12-7.