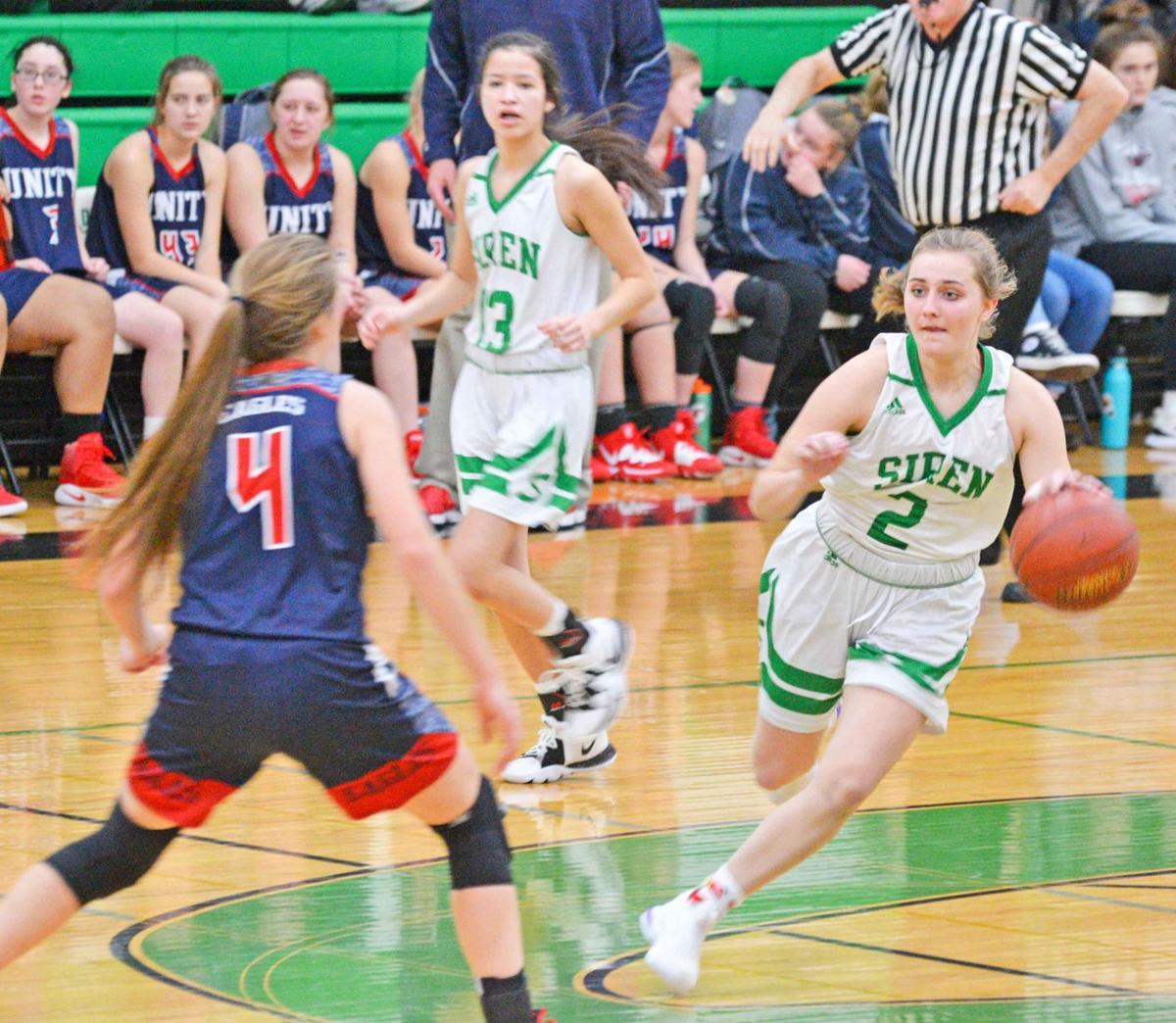 Morgan Shetler tries to bypass Unity player Raegan Sorensen to get close enough for a shot. 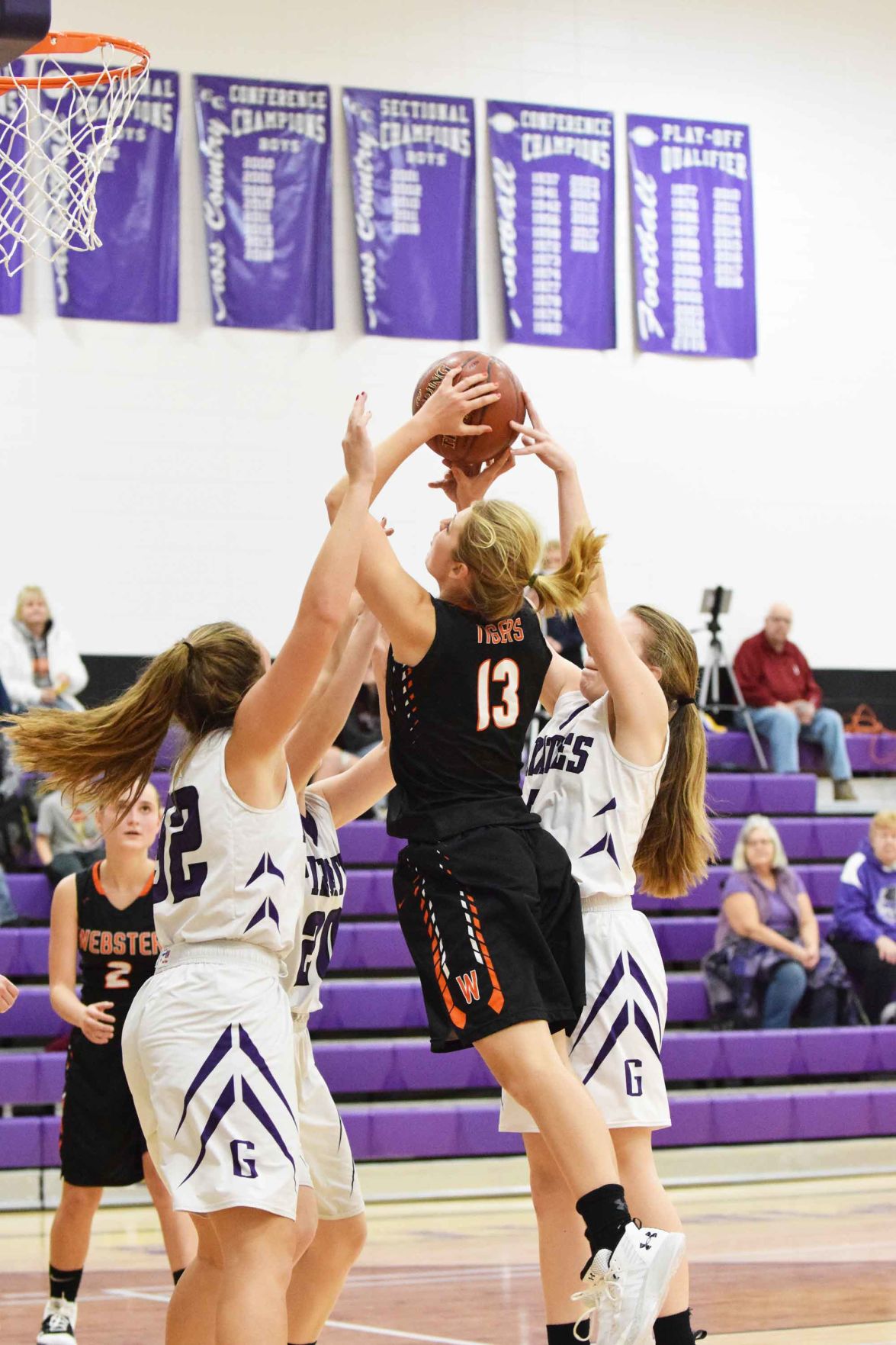 Brooke Hetfeld goes up for a shot surrounded by Grantsburg defenders. 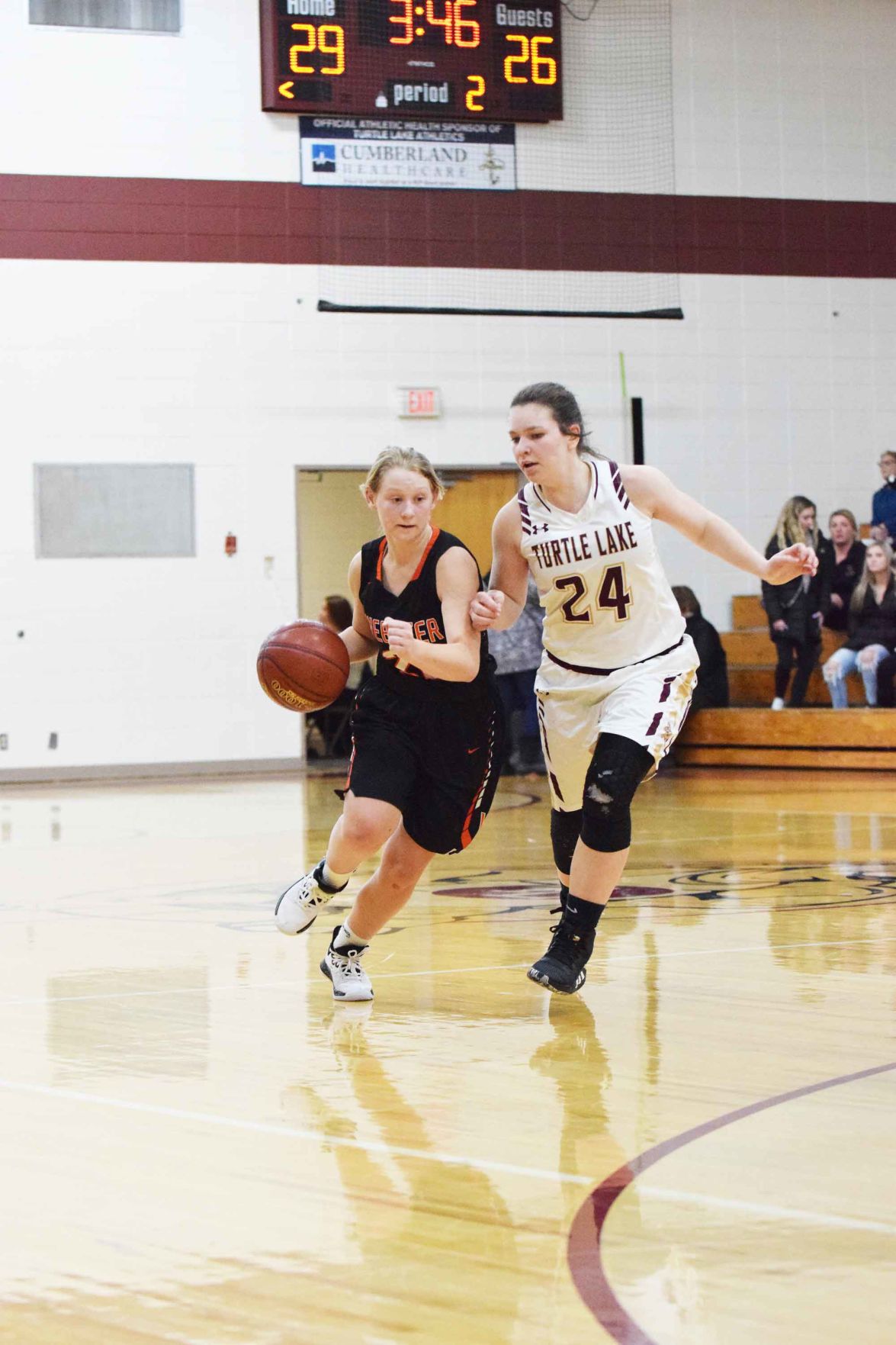 Torrance Wols tries to get around Turtle Lake’s defense.

Morgan Shetler tries to bypass Unity player Raegan Sorensen to get close enough for a shot.

Brooke Hetfeld goes up for a shot surrounded by Grantsburg defenders.

Torrance Wols tries to get around Turtle Lake’s defense.

Playing on the road and seeking their first win of the season, the Dragons got a game-high 18 points from Lindsay Liljenberg, who gave them a 43-42 lead with a basket late in the second half. The potential victory eluded the Dragons though, with the Vikings outscoring them 11-6 in the remainder of the game to take a 53-49 win.

Liljenberg scored just two of her points in the first half but the Dragons remained close to the Vikings and obtained a 24-22 advantage entering halftime. Angel Lightfeather made a 3-pointer to tie the game at 5-5 and Hannah Lemieux did the same shortly after to re-tie the game, at 10-10.

Frederic held a 20-18 lead late in the first before Vinni Rightman scored the final four points of the half and Siren held the two-point advantage to start the second half.

Hannah Schmidt scored five consecutive points in a 6-0 Frederic run to take a 35-33 lead but Liljenberg got the lead back for Siren shortly after, scoring six consecutive points and the Dragons led 40-37 with just over five minutes remaining.

Unfortunately for the Dragons, Schmidt scored eight points in those final minutes to help erase Siren’s lead and a late 3-pointer from Liljenberg to pull the Dragons within a point at 50-49 were their final points of the game.

Hannah Lemieux had nine points for Siren; Jaidyn Jewell had seven and Rightman had five. Schmidt led the Vikings with 16 points with 13 rebounds; Kennady Alseth had 15 points.

Siren entered the week with a 2-2 overall record and was 0-2 in the Lakeland West.

The Tigers earned a conference win over Grantsburg on Dec. 10 and was close to adding another over Turtle Lake on Thursday.

Brooke Hetfeld led Webster to a 45-28 win over the Pirates, finishing with 16 points and 15 rebounds. She led the Tigers to a double-digit lead in the first half while helping the defense limit the Pirates to just 10 first-half points.

Webster needed just one more basket against Turtle Lake, which ended with the 39-37 win.

Webster plays at Bruce this Thursday for its final game of the calendar year.

After struggling offensively in a loss to the Tigers, Grantsburg had even more difficulty on Friday against a strong St. Croix Falls team. The Saints allowed just seven first-half points and pushed their lead past 30 before halftime of a 63-20 win over the Pirates.

Olivia Miron led the Saints’ 10 scorers in the game, finishing with 20 points on her own to match Grantsburg’s team total. Brooke Quimby had nine points for the Pirates; Rachel Tooze added six.

Grantsburg plays at Spooner this Friday.