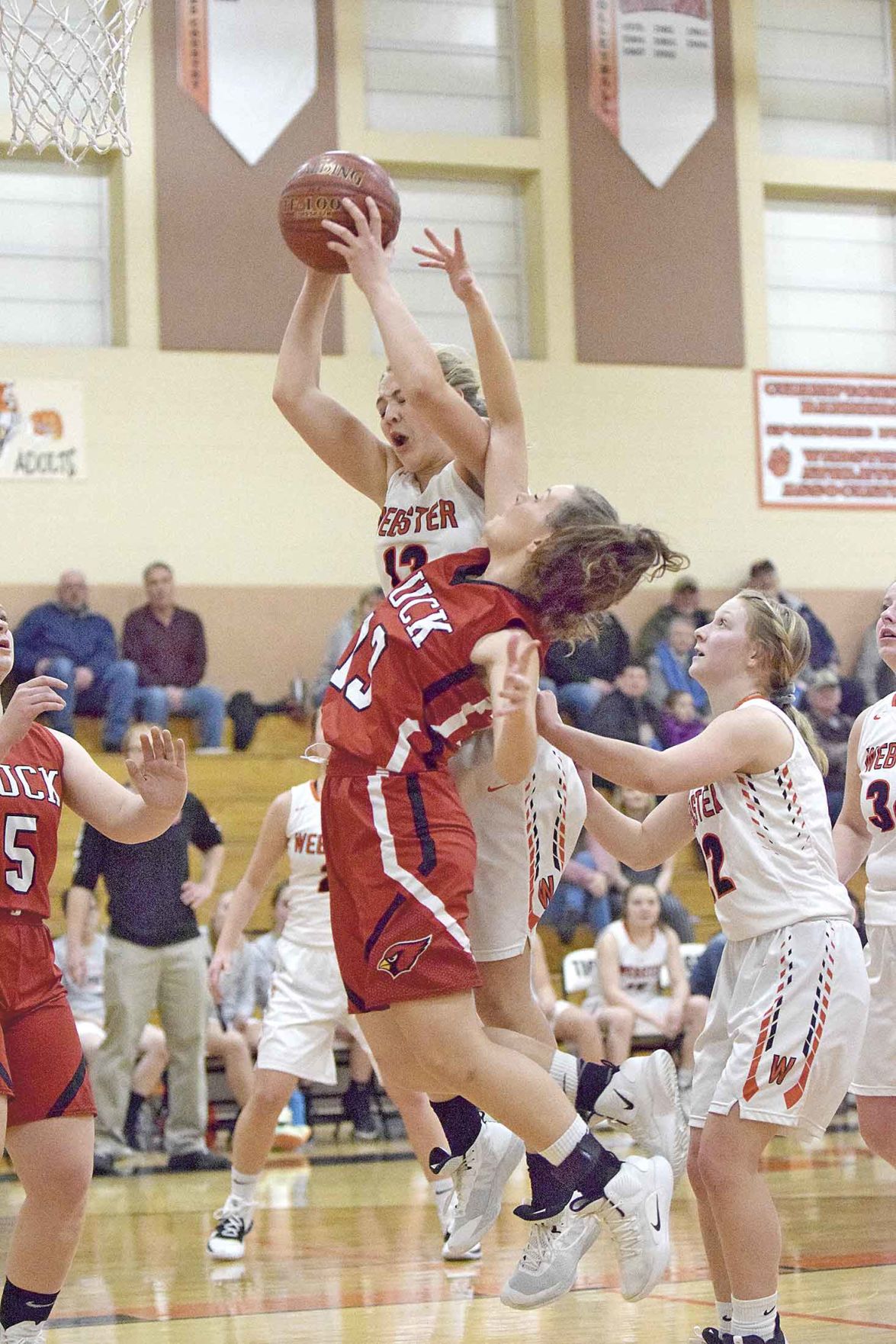 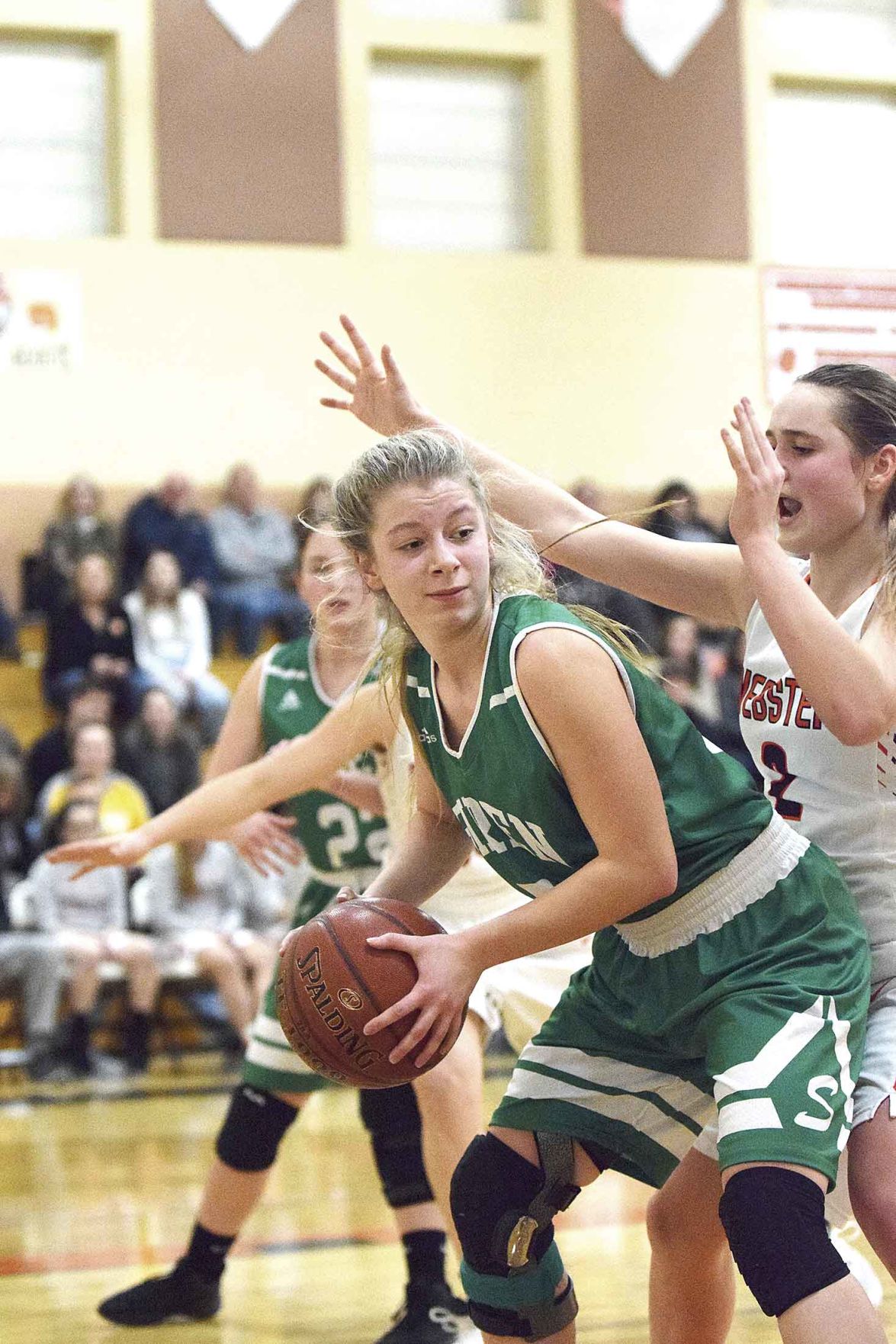 Siren’s Maddy Nichols searching for a teammate or an opening for a shot against Webster. 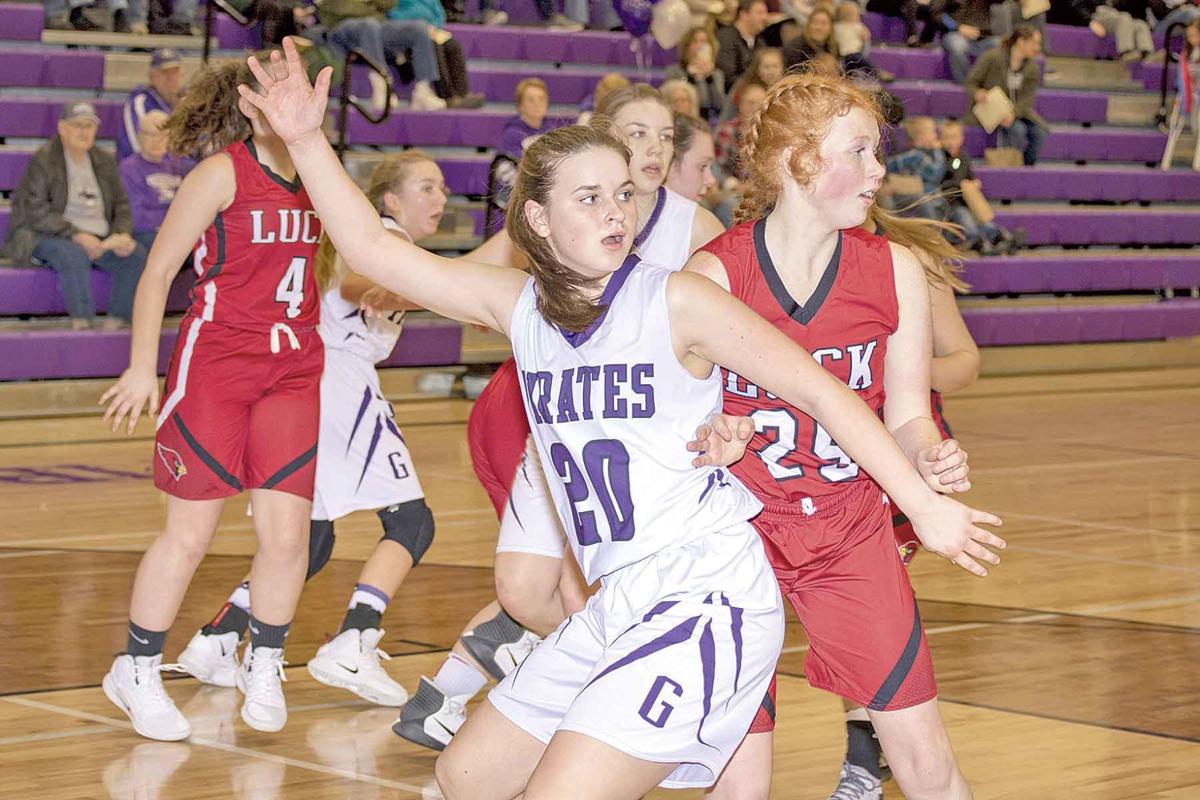 Grantsburg's Tiffany Gronski (20) posts up strong as she calls for the ball in the win over Luck.

Siren’s Maddy Nichols searching for a teammate or an opening for a shot against Webster.

Grantsburg's Tiffany Gronski (20) posts up strong as she calls for the ball in the win over Luck.

SIREN – The 3s have helped lift the Siren girls basketball team to third.

With the Lakeland West lead still securely occupied by undefeated St. Croix Falls and the runner-up spot under Unity’s control, the Dragons’ long-distance shooting gave them sole possession of third last week. A win at 4th-place Luck this Friday would give them more breathing room and keep the Dragons within striking range of second.

On Feb. 4, Siren’s Lindsay Liljenberg, Hannah Lemieux and Morgan Shetler boosted the team to the .500 mark in conference play. The trio combined for 14 of the team’s 15 3-pointers in a runaway 85-69 win at Webster. Liljenberg finished with a game-high 28 points, sinking six of the Dragons’ long-range makes while Lemieux and Shetler had four 3-pointers each; Lemieux finished with 17 points and Shetler added 16.

However, the Tigers were still within a 3-pointer entering halftime. Brooke Hetfeld led Webster with 18 points and added 18 rebounds in the game and with help from her teammates, the Tigers started the second half just a basket behind at 36-33. Torrance Wols added 14 points in the game while Grace McCool sank three of the team’s four 3-pointers to finish with 11 points.

Siren extended that slim halftime lead with a 49-point second half to improve its in-conference mark to 5-5 on the season and drop the Tigers to 2-7.

But another matchup with St. Croix Falls meant another loss for the Dragons on Friday.

The Saints limited Siren to 16 points in the first half to take a 25-point lead into halftime and end with an eventual 65-31 win. This time it was St. Croix Falls with the advantage at the 3-point line, sinking three in the first half while the Dragons were held to one long-distance make in the game.

Lucia Neuman had three of the Saints’ 3-pointers to finish with a game-high 13 points; they also outscored the Dragons 9-4 at the free throw line. Jewell led Siren with 10 points; Shetler had seven.

St. Croix Falls remained undefeated at 18-0 overall and 10-0 in the Lakeland West; Siren dropped to 11-6 overall and to 5-6 in the conference. After going to Luck this Friday, the Dragons host Bayfield on Saturday for a rescheduled game.

Though their point total (69) against Siren wasn’t enough for a win earlier in the week, a total of 49 was good enough to defeat Luck on Thursday.

Hetfeld led Webster with 15 points and Torrance Wols added 10 in a 49-38 win over the Cardinals, which pulled them within a game of Luck in the Lakeland West standings at 3-7. The Tigers’ defense limited Luck to just four players with more than one basket in the game, led by Coral Melin’s 15 points.

McDowell had nine points for the Tigers and McCool added seven.

Webster, Grantsburg and Frederic started the week in a three-team tie for fifth in the conference with just over a week remaining in the regular season. The Tigers host Unity this Thursday.

Since the second week of 2020, the Pirates have alternated wins and losses, getting neither consecutive wins nor consecutive losses. That trend continued with a 54-40 win over Luck on Feb. 4 and a 50-47 loss to Frederic on Friday.

Brooke Quimby had a game-high 22 points for Grantsburg in the win over Luck; Olivia Ohnstad and Madison Schafer had 10 points each.

“Our goal was to shutdown (Grace) Thoreson from Luck,” Grantsburg coach Penny Curtin said. “She single-handedly beat us the first time around. The team played great defense and cut her point total by more than half.”

Grantsburg entered the week at 8-9 overall and 3-7 in the conference; the Pirates host Somerset this Thursday and Cameron on Tuesday.