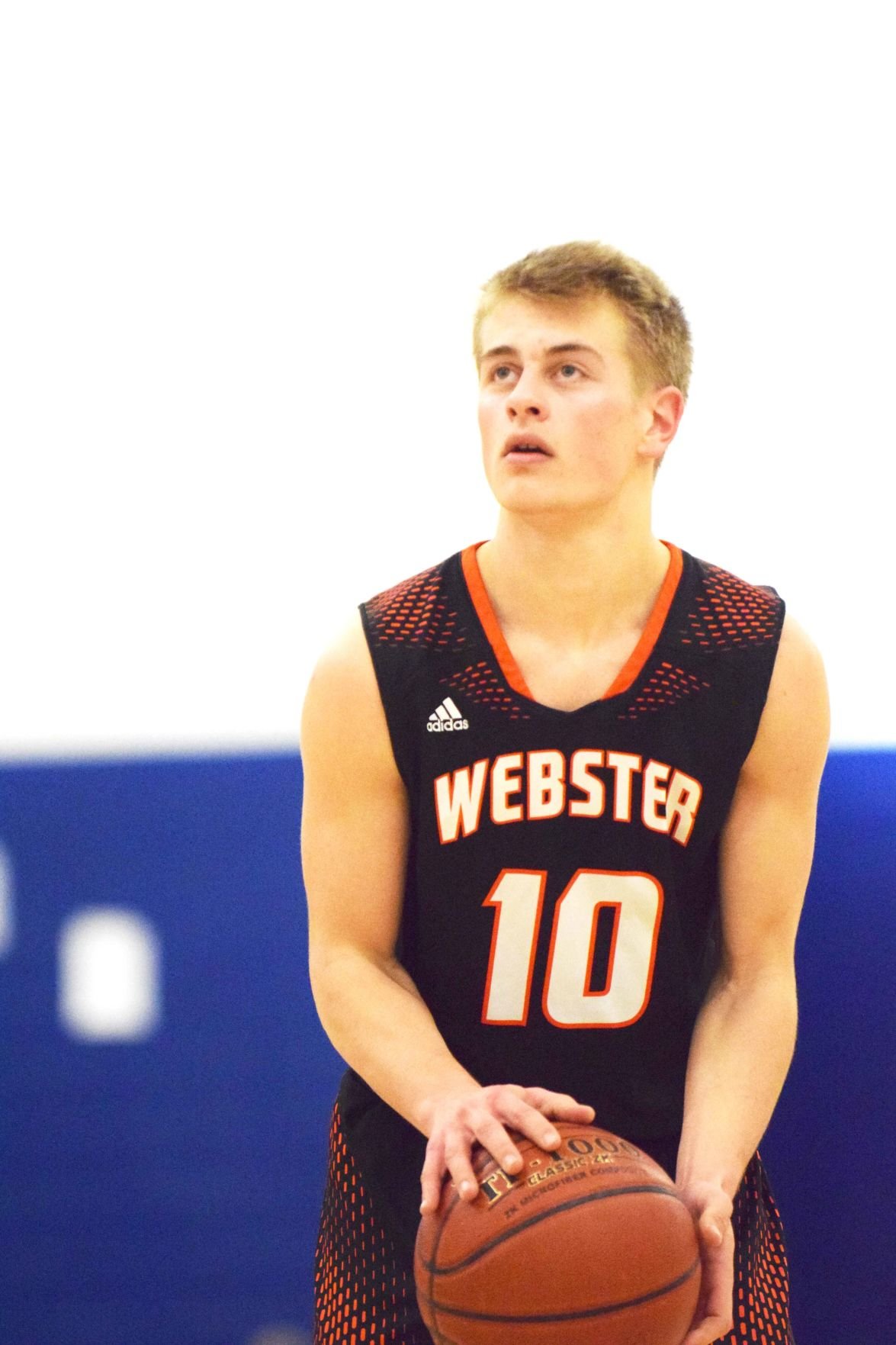 Webster’s Tanner Pardun lines up his shot at the free throw line. 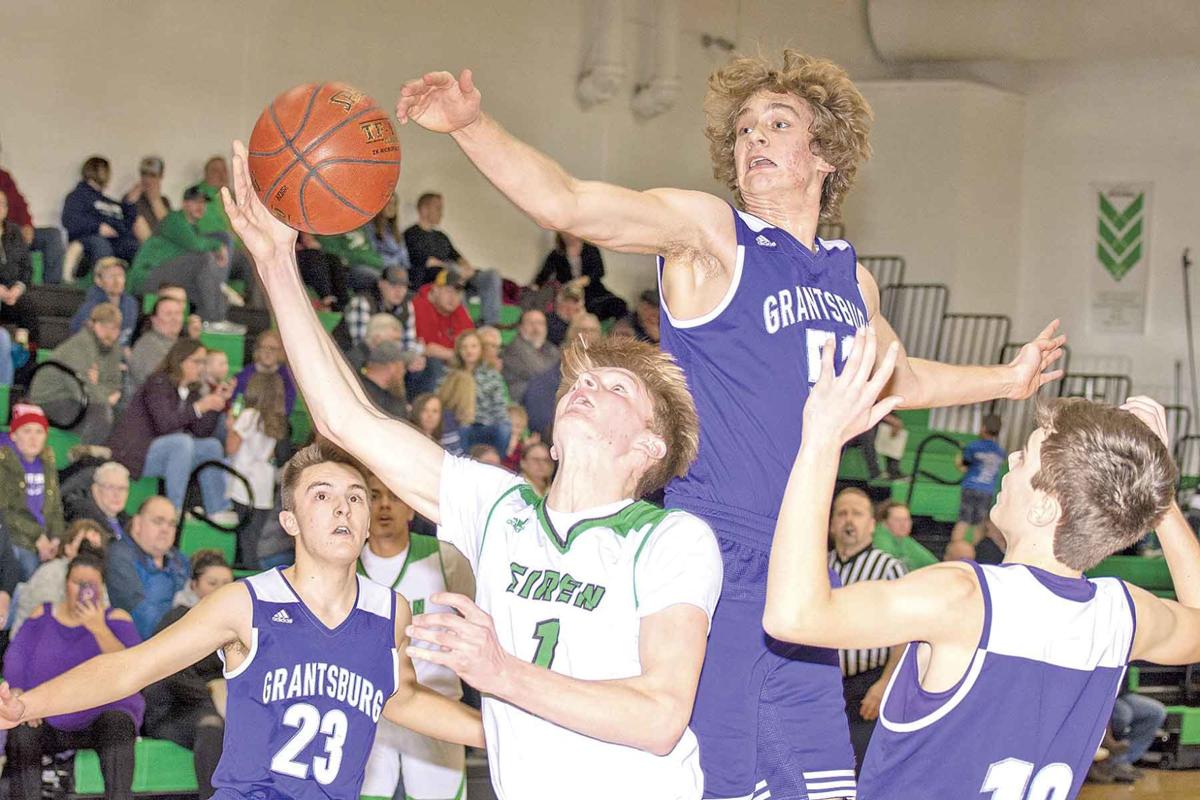 Siren’s Brady Kosloski (1) is blocked from behind by the long arms of Jared VanWatermeulen during Friday’s game.

Webster’s Tanner Pardun lines up his shot at the free throw line.

Siren’s Brady Kosloski (1) is blocked from behind by the long arms of Jared VanWatermeulen during Friday’s game.

SIREN – The Lakeland West race could have been even closer entering the week.

Previously undefeated in conference play, the Luck boys basketball team took its first Lakeland loss last week allowing Unity to pull within a half game of the leader. Grantsburg could have maintained a runner-up tie with the Eagles, if not for Siren earning its second conference win of the season on Friday.

Nathan Kosloski scored a game-high 21 points for the Dragons and led them to a 57-52 win at home over the Pirates, dropping them to third in the conference at 5-3. Meanwhile, the Dragons joined Webster and Frederic as two-win teams fighting for fifth.

While the Dragons got their boost from Kosloski, Austin Wedin did the same for Grantsburg. Wedin made three first-half 3-pointers and scored 11 points before halftime to match Kosloski’s total. The identical scoring between the two was reflected in the 29-29 score entering halftime.

Wedin added another pair of 3-pointers in the second half and finished with a team-high 20 points, though the Dragons were able to hold a late lead for the win. Riley Churchill added eight second-half points for Siren and Brady Kosloski had all seven of his points after halftime.

Churchill finished with 13 points for the Dragons, who improved to 2-7 in the conference and to 5-10 overall. Jared VanWatermeulen had 15 points for Grantsburg and Gus Bergman added nine. The Pirates dropped to 9-6 overall on the season.

The game at Siren was the second close loss of the week for the Pirates. On Jan. 28, Turtle Lake’s Brendan Stremke scored 16 of his 20 points in the second half to lead the Lakers to a 69-64 home win over the Pirates.

Grantsburg again was good from the outside, sinking four 3-pointers in the first half. Wedin led the effort with eight points in the first half; both he and Bergman had two long-distance makes before halftime. They led the Pirates to a slim 21-20 lead entering the break.

Knutson finished with 12 points for Grantsburg; Bergman added eight and Zach Miller had 10.

The Tigers played three close games in the span of seven days, but the final two ended in losses.

On Jan. 28, they played at Shell Lake and earned their second consecutive win in a 63-54 decision. On Friday, the Tigers played their first of two consecutive one-possession games, at St. Croix Falls. Despite totaling 43 second-half points to dwindle a 10-point Saints’ lead, Webster finished on the short end of a 66-63 score. St. Croix Falls had three double-digit scorers, including Declan Greenquist, who sank four of the team’s 10 3-pointers to finish with 19 points.

The result on Monday was even closer, coming down to a final Frederic shot that gave the Vikings a 61-60 win over the Tigers.

Tallon Parent had a team-high 18 points while Tanner Pardun had 12 and Harlo Olson added 11 for Webster, which held a late 60-57 lead. After a game-tying 3-pointer from Siren’s Logan Lillehaug, the Tigers had a chance to reclaim the lead in the final seconds, but a missed shot led to a Siren possession that drew a foul and allowed the game-winning free throw with less than a second remaining.

“We have been playing competitive basketball but falling short in the end,” Webster coach Rob Scherrer said. “It’s frustrating for us to be so close so often but just not getting over the hump. (The) only thing we can do is keep grinding and try to play our best basketball down the stretch.”

The Tigers dropped to 2-7 in conference play and to 5-10 overall on the season. They host Luck this Thursday and have a rematch with Frederic at home on Tuesday.