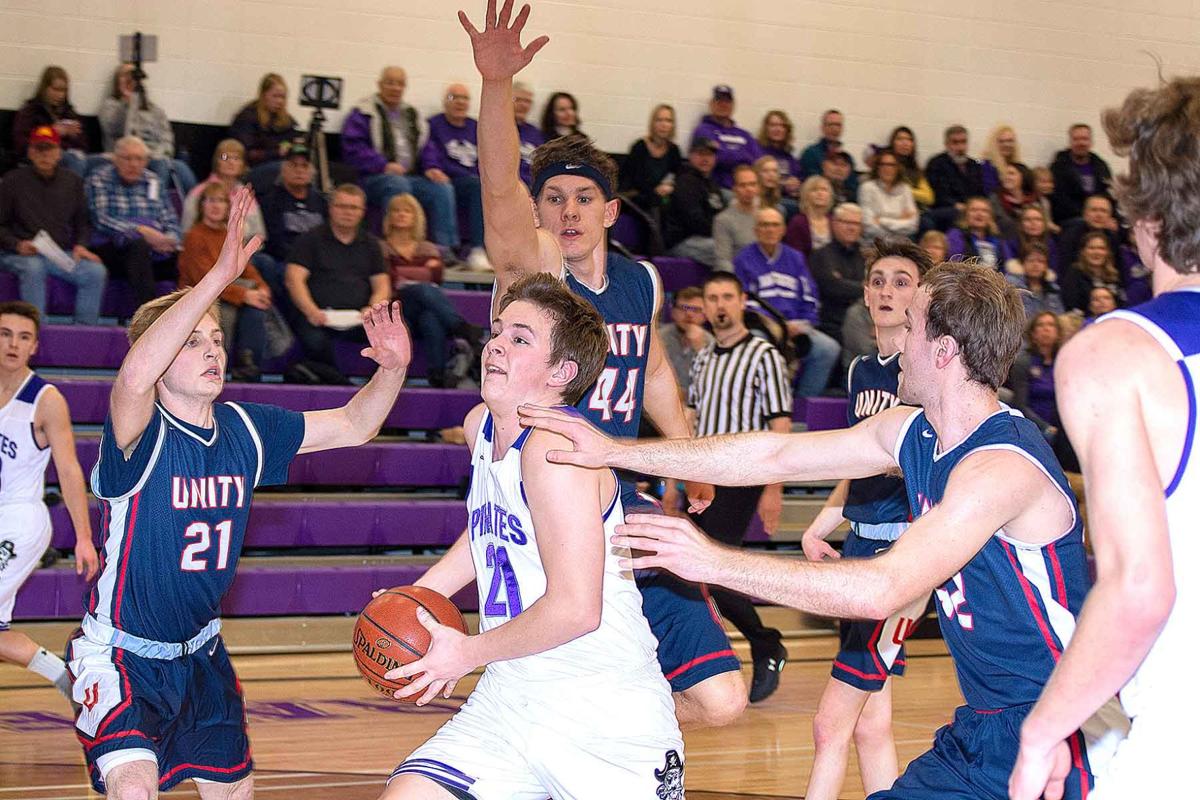 Grantsburg’s Gus Bergman cuts through the Unity defense as he heads to the hoop. 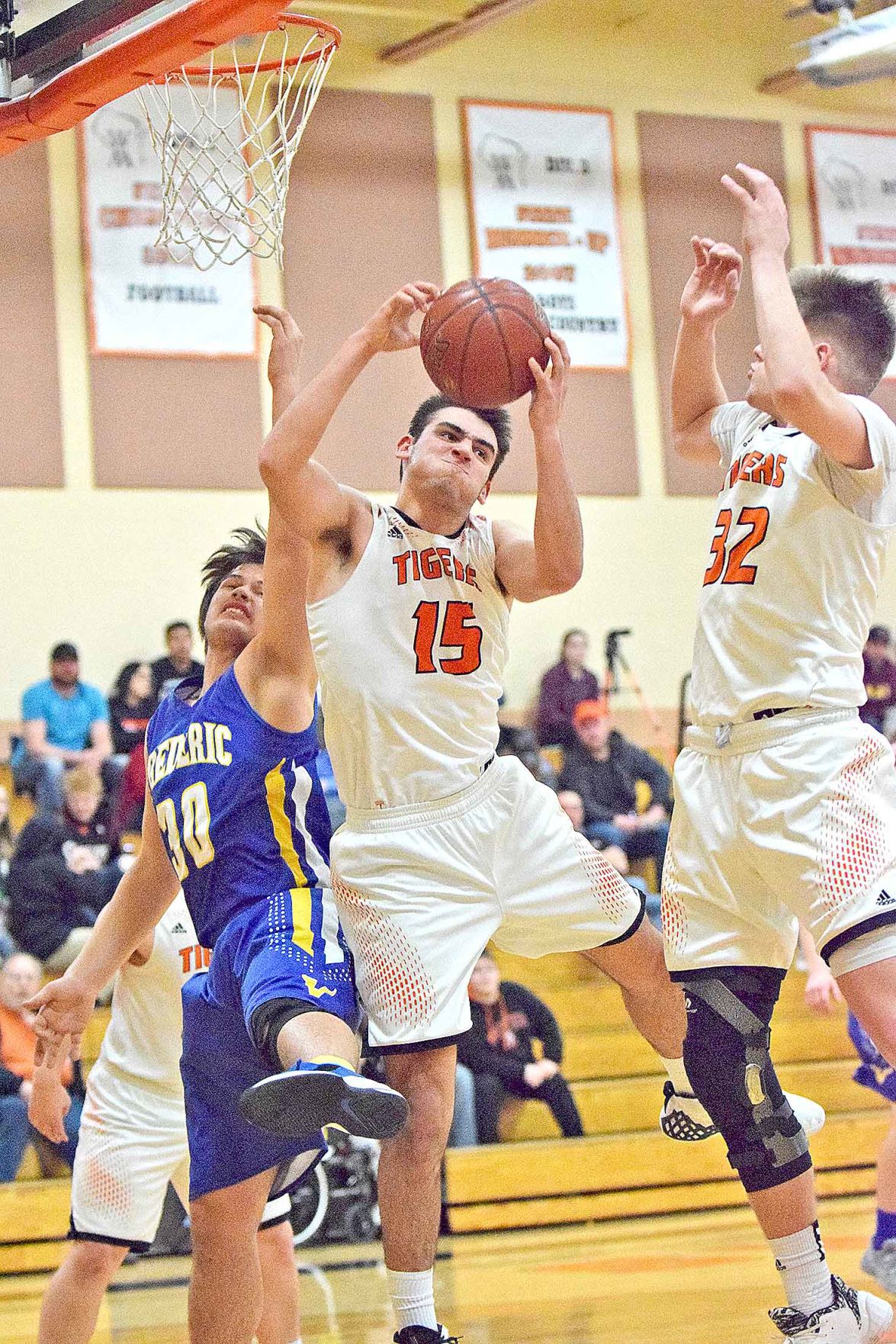 Webster’s Tallon Parent goes up for a rebound against Frederic. 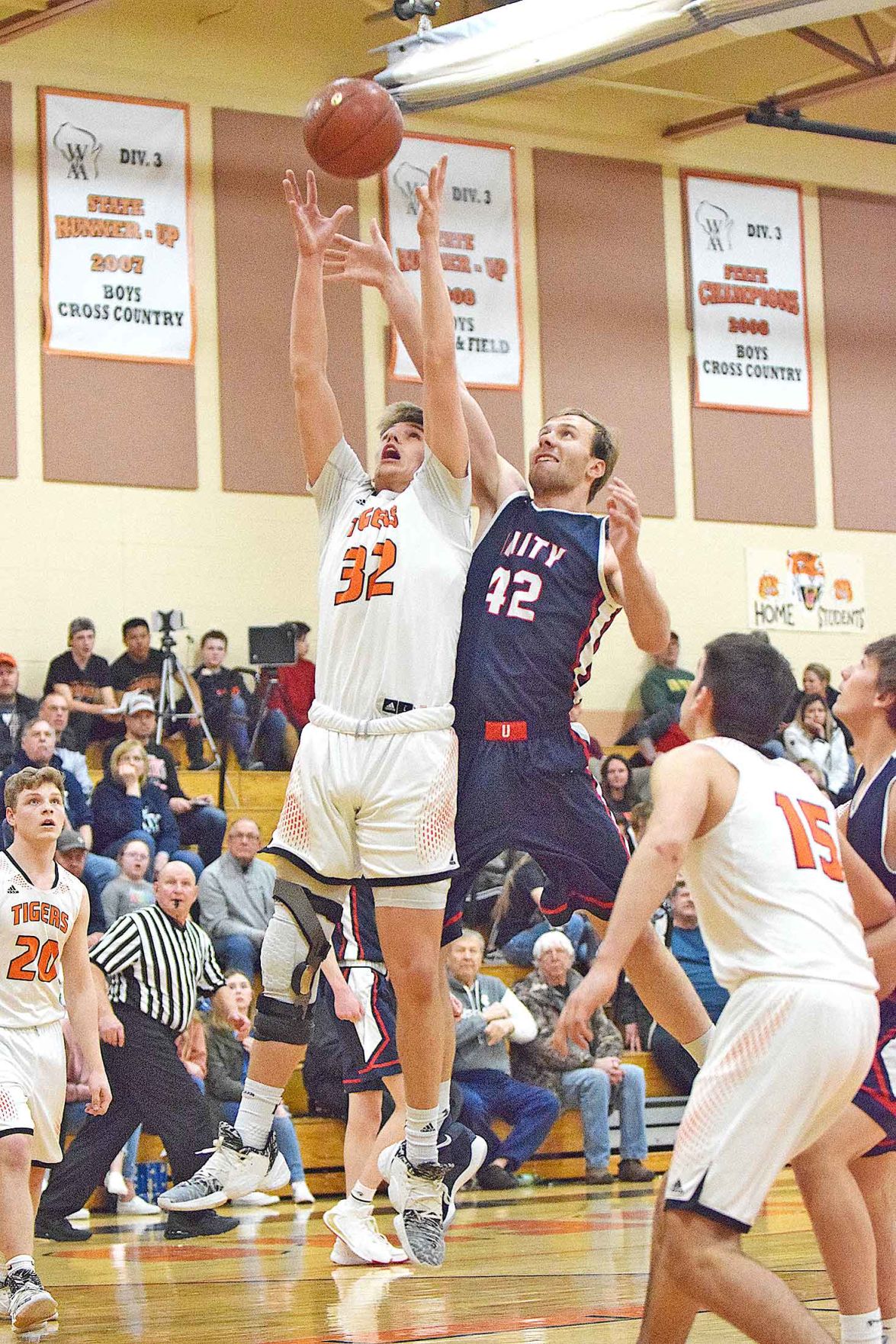 Grantsburg’s Gus Bergman cuts through the Unity defense as he heads to the hoop.

Webster’s Tallon Parent goes up for a rebound against Frederic.

The Webster boys basketball team moved to 9-10 overall on the season last week and can break even this Friday at Cumberland. After gaining more breathing room in fifth place of the conference standings with a win over Frederic last week, the Tigers were seconds from moving above the .500 mark by dropping Lakeland West-leading Unity last Thursday.

On Feb. 11, Webster overcame a halftime deficit by scoring 39 second-half points in a 57-45 win over Frederic. Tallon Parent had a game-high 18 points and 11 rebounds for the Tigers, who were outscored 7-2 to end the first half, entering the break trailing 22-18.

The Tigers trailed by as many as six in the second half but an 11-0 run put them up 35-29 near the midway point of the half. Back-to-back baskets from Owen Washburn later in the half gave Webster a 50-40 lead and Parent soon scored five consecutive points to secure the win.

A second consecutive win was denied by Unity on Thursday, despite the Tigers forcing overtime. The Eagles got the 51-43 win to maintain the Lakeland West lead while the Tigers dropped to 4-8 in the conference.

The Pirates entered the week a game behind St. Croix Falls for third in the Lakeland West, after taking a 53-34 loss to Unity on Feb. 11.

Jaxon Flaherty scored a game-high 33 points for the Eagles, who limited the Pirates’ scoring options in both halves. Jared VanWatermeulen led Grantsburg with 12 points and 11 of those were scored in the first half. He was the team’s lone player with more than one basket in the first half but was limited to one make from the free throw line in the second half.

Unity took a 36-18 lead into the break and maintained a double-digit advantage for the remainder.

Carson Knutson added eight points for Grantsburg and Austin Wedin had five. The Pirates dropped to 7-4 in the conference and to 11-7 overall on the season. They have a road rematch with Unity this Friday and would pull within a game of the conference lead with a win.

The Dragons have the rest of the week to regroup and prepare for the final week of the regular season.

Siren had its game against Northwood on Feb. 11 postponed but still had a chance to hinder Luck’s Lakeland West title effort on Friday. Despite taking a lead into halftime, the Dragons were outscored 36-17 in the second half of a 69-55 road loss.

Riley Churchill led Siren with 18 points and seven rebounds while helping the team overcome an early 5-0 deficit. He scored four points in a 6-1 Dragons’ run that gave them a 26-21 lead with less than five minutes remaining in the first. Both he and Nathan Kosloski sank free throws in the final minute to help Siren take a 38-33 lead into the break.

But, Levi Jensen scored the first six points of the second half to erase Siren’s lead and he eventually finished with a game-high 24 points. The Dragons regained a brief lead but a 13-3 run by Luck gave it the lead for good.

On Monday, the Dragons were outscored 41-28 in the second half of an 80-67 road loss to Birchwood. Matthew Marcinske scored a game-high 31 points for Birchwood and Preston Herricks added 26.

Siren dropped to 2-10 in the Lakeland West and to 5-14 overall. The Dragons play at Drummond on Monday and host Clayton on Feb. 27.