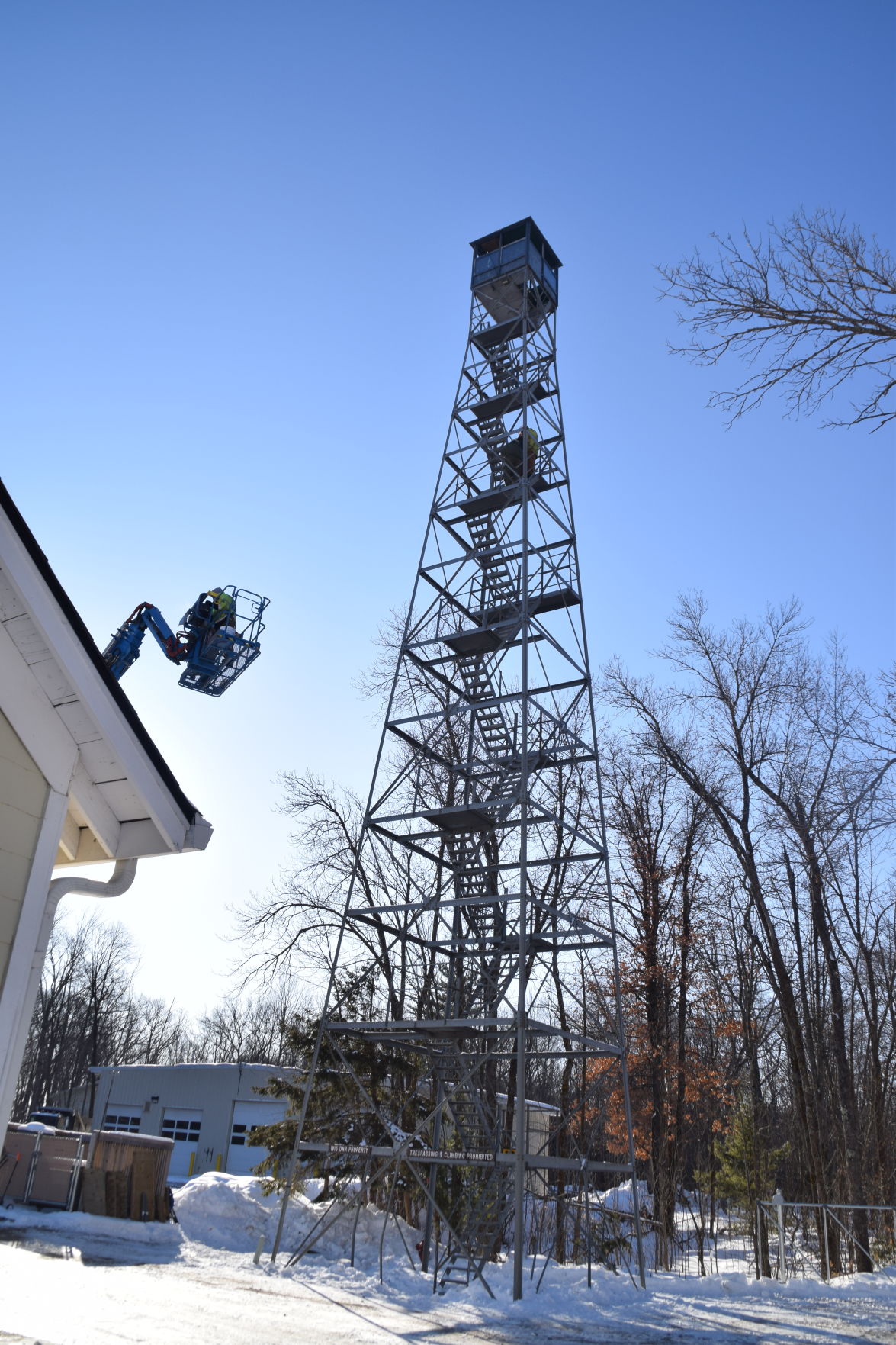 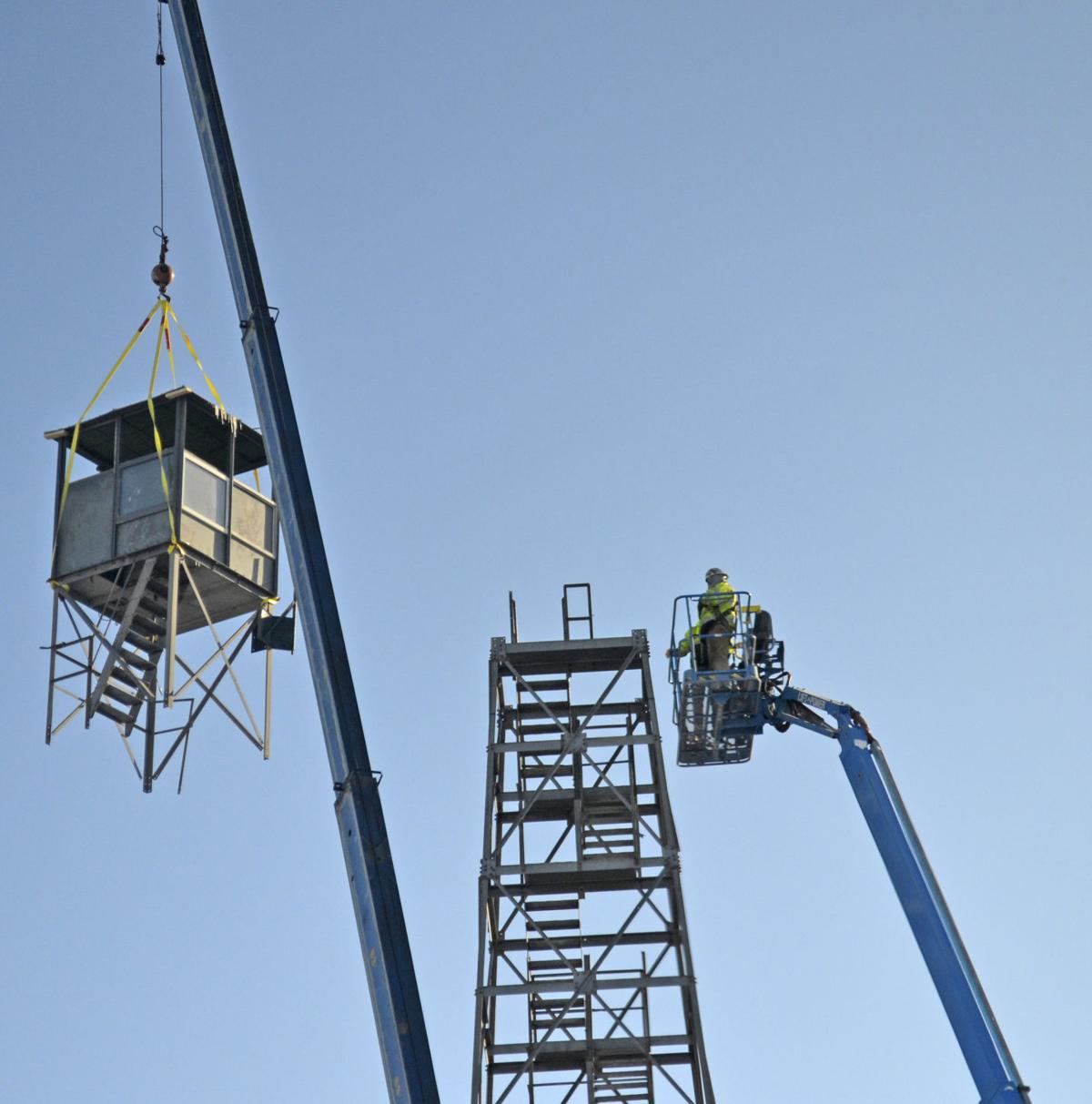 Some older Grantsburg folks were sad and nostalgic Wednesday as workers began to take down the DNR Fire Tower, a Grantsburg landmark on Tower Hill, the highest spot in the village.

The removal marks the end of an era. Fire towers were erected during the 1920s, 30s and 40s throughout Wisconsin and Minnesota forests. Some say the Grantsburg tower has been in place since 1932, after being moved piece-by-piece from an earlier location on the north side of the highway.

Fire spotters in airplanes began to replace the tower-top spotters as early as the late 1950s, but Burnett County DNR continued to staff its towers until 2011.

It was a solitary job, but the spotters had to remain vigilant. When they saw a “smoke,” the spotter used a table-top device called an alidade to estimate the direction and distance to the fire, then grab their radio to notify the DNR fire headquarters in Cumberland.

Pinpointing the exact fire location required spotters in several towers working together. In contrast, one airplane observer could immediately fly toward the smoke and see what was ablaze and note its location.

“A trip to the top of the 110-foot tower affords an amazing view,” says Fire Spotter Dorene Snyder of Grantsburg, who made one last trip to the top this week. She worked in the Grantsburg tower 24 years. “On the clearest days, I could see the smokestacks of the Potlatch Paper Mill in Duluth,” she said.

“Our general range for fire spotting was about 20 miles in all directions,” she added. ”If you looked out farther than that, you were in another tower’s backyard.”

Headed for another hill

The Wisconsin DNR has been advertising its fire towers for sale for a few years. Dorene Synder hoped the Grantsburg tower could be saved, as it was located on DNR property and was a treasured village landmark. Generations of elementary school students hiked the wooded trails around the tower and climbed it.

But, preserving it here wasn’t to be. Most of the towers are at least 80 years old, and buyers can often pick them up for less than $5,000 to salvage the metal for scrap.

At least the Grantsburg tower faces a better future than the scrap heap. Jon Dobbs, a retired owner of a medical equipment business in Minoqua, resides in nearby Boulder Junction.

Dobbs is an enthusiast of history and towers. Jon’s wife, Jaci, said,” Jon loves towers. He has probably looked at a dozen or more of these DNR towers around Wisconsin, but this one was in the best condition by far,” she said.

Dobbs called on his buddy in the construction business and engaged him and his crew to bring their tall cranes to Grantsburg to begin the disassembly process. First, they stabilized the tower, then attached heavy straps around the tower’s house or “cab.” Despite a chilly wind, the work high above the trees continued steadily until 3:30 p.m.

Finally, the crane lifted the cab and some of the stairway beneath it above and away from the tower girders, then slowly lowered it to the ground, where it was gently laid on its side on a flatbed trailer.

The tower will be taken apart, piece by piece. It is headed for its new home in Montreal, WI, a few miles southwest of Hurley, where the Dobbs own a vacation home.

“This tower will be rebuilt on our property, on the highest hill in the area, for private use,” Jaci Dobbs said. “We will be able to see Lake Superior, which is about 18-20 miles to the northwest.

What will they put in the tower’s cab? Windows, chairs and stools, binoculars and probably a spotting scope. “And, a hammock for me,” Jaci Dobbs said.