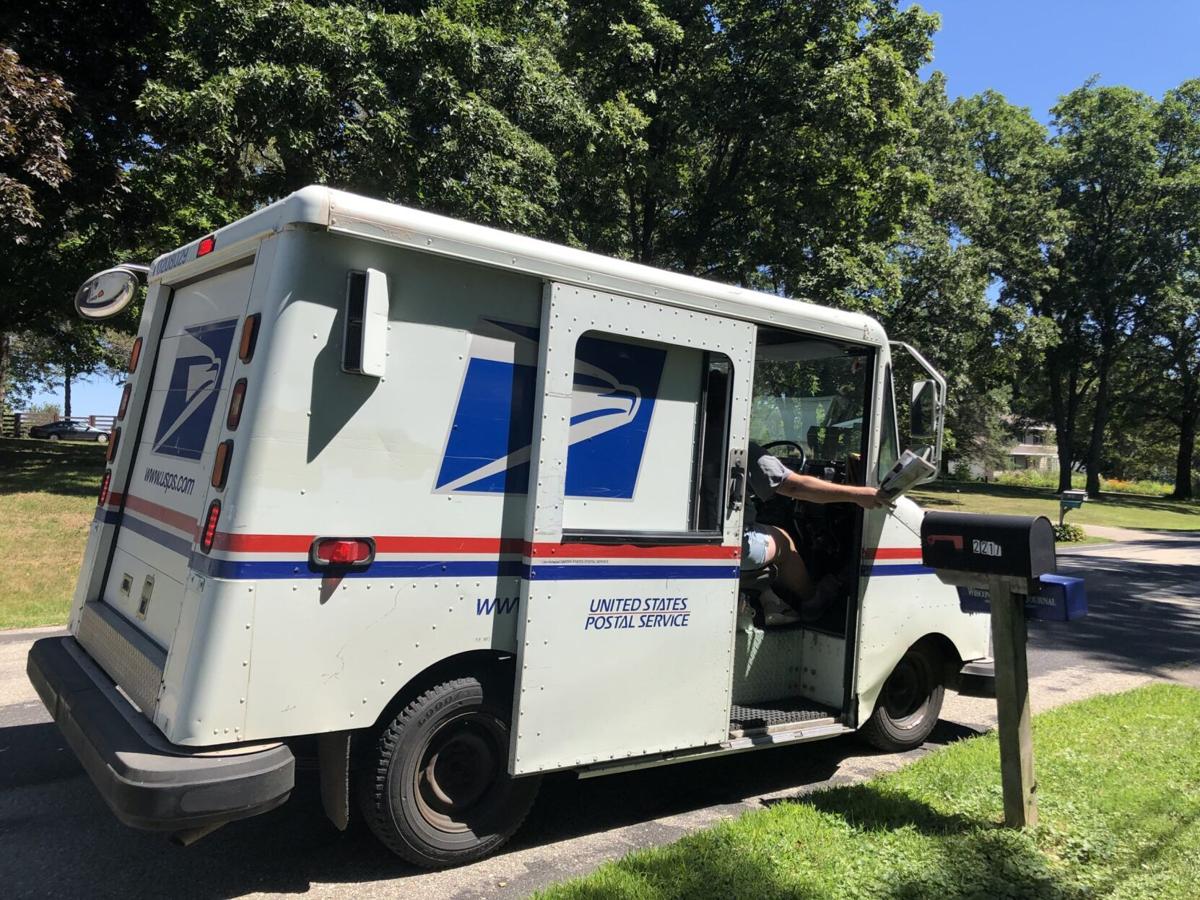 A U.S. Postal Service carrier delivers mail in Fitchburg, Wis., on Aug. 19, 2020. Delays in mail delivery in Wisconsin and nationwide are prompting concerns about the ability of the postal service to manage an expected flood of absentee ballots in November. 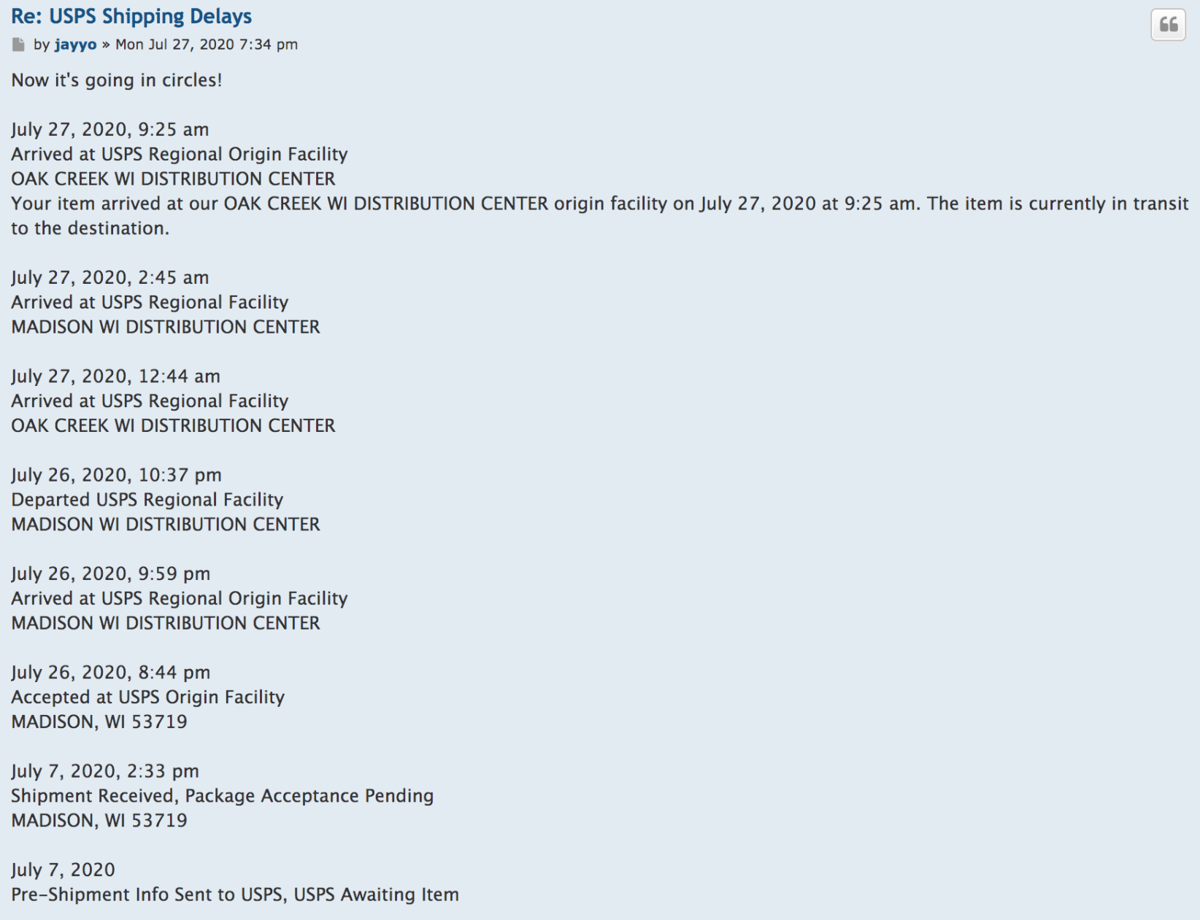 This message from the Chef Knives to Go website shows the circuitous route taken by a customer’s order in July. The owners of the Fitchburg, Wis. company say recent delivery problems with the U.S. Postal Service have prompted them to switch most of their business to the more expensive FedEx. 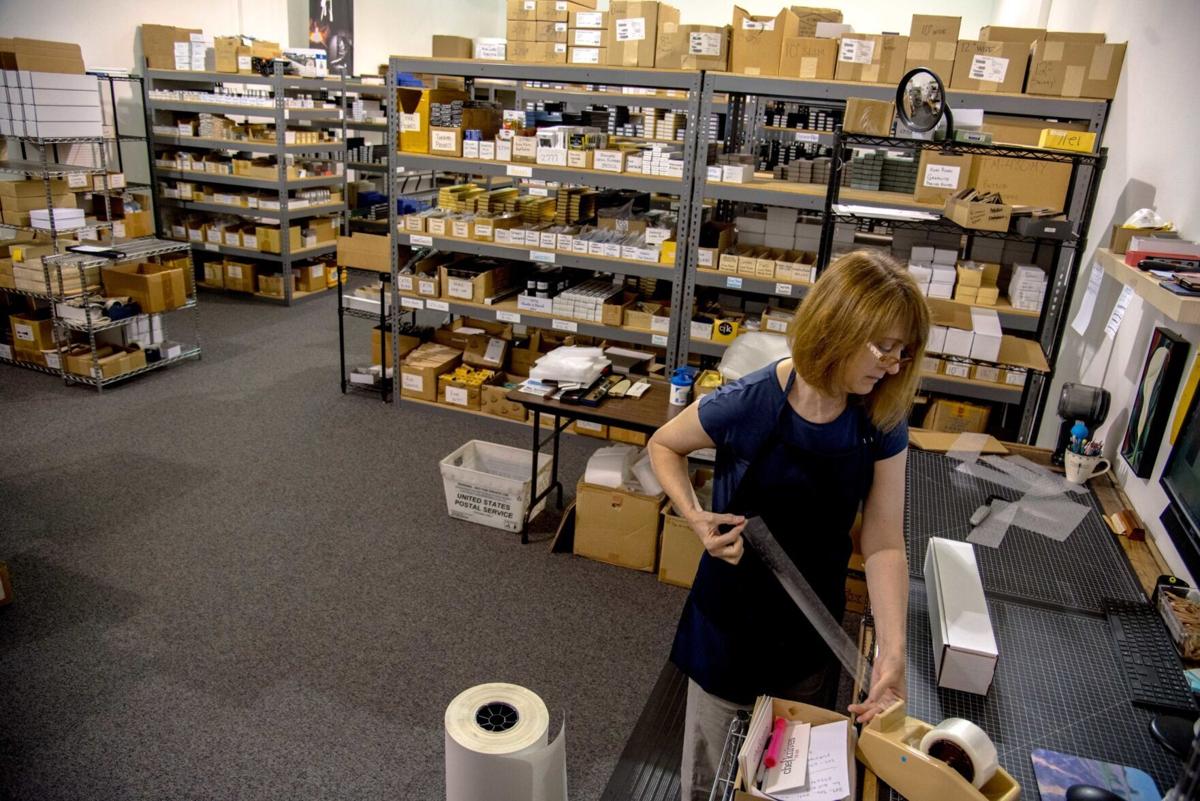 Susan Brown boxes orders to be shipped from Chef Knives To Go, the business she runs with her husband in Fitchburg, Wis., on Aug. 18, 2020. They say delivery delays that began this spring have prompted them to shift most of their shipping business to FedEx. Wisconsin has seen mail delays — including on delivery of absentee ballots — even before the controversial cost-cutting measures by new Postmaster General Louis DeJoy. 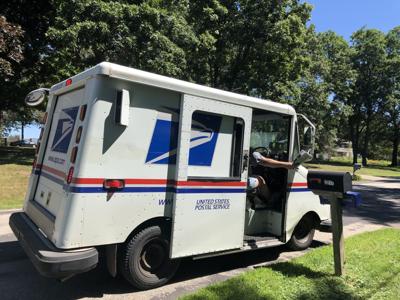 When the packages Susan Brown sent from her business in Fitchburg, Wisconsin took longer than usual to reach customers in New York City and parts of Michigan in late April, Brown figured the pandemic had slowed down the mail. After all, the Japanese kitchen knives she and her husband import and distribute nationwide were bound for two of America’s biggest coronavirus hotspots at the time.

When a dozen orders sent out by their business, Chef Knives To Go, mysteriously vanished in June, Brown figured it was a fluke.

But when the U.S. Postal Service could not account for 33 more delayed packages she sent in July, Brown said she wondered whether a deliberate slowdown was afoot.

“That was, for sure, the final straw. And that's when we started using FedEx,” Brown said.

Before the slowdown, she estimated the business shipped 75% of its packages through USPS and the other 25% using FedEx. In the past few weeks, those numbers have nearly reversed. The lost business for USPS is significant, considering that Chef Knives To Go is on pace to ship more than 30,000 orders this year.

USPS has triggered a series of business headaches. Brown has spent hours on the phone with customers wondering where their packages are. She has given refunds and sent replacement knives only to have the original shipments finally arrive several weeks late. Then she must spend time retrieving the replacement knives.

FedEx had always done a better job tracking packages, Brown said, but she could previously count on the Postal Service to reliably deliver at competitive rates since her business opened in 2002. (“We attribute a lot of our success to the Postal Service. We love our carriers.”)

Now she can’t help but wonder whether USPS packages will arrive at all.

The snail mail worries extend far beyond handmade, hammer-forged knives. Some members of the public still rely on the USPS for paychecks, rent and mortgage payments, prescription drugs — and increasingly, voting.

Postal workers in Wisconsin say the delays could affect the presidential election as up to 2 million voters in this swing state are expected to cast absentee ballots in November.

The workers say delays were exacerbated by changes enacted in recent weeks by Postmaster General Louis DeJoy, who banned overtime, changed delivery policies and oversaw the decommissioning of sorting machines — citing the need for significant cost cutting. Under intense pressure from elected officials and the public, DeJoy on Tuesday responded to the outcry, saying he would delay any changes until after the November election.

Also on Tuesday, Wisconsin’s Democratic Attorney General Josh Kaul pressed ahead with a multistate lawsuit to halt what he called an “attempt to sabotage fair elections.” It seeks to rescind DeJoy’s initial actions and return postal operations to normal. The lawsuit also aims to force DeJoy to go through the Postal Regulatory Commission for any future changes.

DeJoy’s postal shakeup prompted such alarm that the U.S. House is scheduled to vote Saturday on legislation to bar operational and service changes from what was in effect Jan. 1, 2020 —  and to provide $25 billion in pandemic relief funding to the Postal Service. DeJoy also is scheduled to testify Friday morning before the U.S. Senate Homeland Security committee, chaired by Wisconsin’s Republican Sen. Ron Johnson, who has signaled he favors DeJoy’s cost-cutting measures. DeJoy also is expected to appear before the House Oversight committee on Monday.

DeJoy’s critics note that he and his wife have up to $75 million in holdings in competitors to the USPS. DeJoy also is a major donor to President Donald Trump, who repeatedly has claimed without evidence that mail-in voting is rife with fraud.

Trump indicated last week that he opposes sending $25 billion in pandemic relief to the USPS, musing that the proposal’s failure would leave the service struggling to manage widespread mail-in voting. But White House chief of staff Mark Meadows told CNN Monday that Trump would sign a legislative package — but only if it included USPS relief alongside other relief measures that Republicans back.

Even before the uproar over these moves, lawsuits filed in Wisconsin and elsewhere have sought to relax mail-in deadlines for the November election, citing delivery delays and the ongoing pandemic. And the Postal Service has issued conflicting signals on its ability to handle a flood of absentee ballots in November.

In late July, the service sent letters to 46 states including Wisconsin, warning that the USPS may not be able to guarantee on-time delivery for some absentee ballots sent to clerks less than seven days before an election. Wisconsin allows voters to request an absentee ballot as few as five days before an election. But on Tuesday, DeJoy offered a rosier assessment, saying, “The Postal Service is ready today to handle whatever volume of election mail it receives this fall.”

Across the country, DeJoy’s USPS has decommissioned hundreds of machines capable of sorting millions of pieces of mail a day. It was unclear Tuesday whether those machines would return to service, said Chris Czubakowski, vice president of the American Postal Workers Union local in Milwaukee.

Four of the 36 sorting machines in the USPS’ main office in Milwaukee have been shut down, with three more initially slated for decommissioning, Czubakowski said. A moratorium may have been placed on plans to remove the additional three machines, he added.

Czubakowski says the Postal Service has tightened its belt for years since Congress required the service to set aside decades’ worth of health care coverage costs for retired postal employees. Overtime allows the Postal Service to continue deliveries with fewer people, he says.

DeJoy has said the cost cutting was necessary due to “substantial declines in mail volume and a broken business model” that results in billions of dollars in overtime pay each year and service that falls short of delivery targets.

A Waukesha County mail carrier, who asked not to be named for fear of reprisal, says some of the procedures put in place July 16 made it impossible for carriers to sort and deliver the mail on time. The postal employee, a nearly 30-year veteran, says mail carriers were given a deadline of 25 minutes to sort mail for the next day’s delivery — a task that normally takes between 60 and 90 minutes.

“The decision was made to have us only (organize) our mail for 25 minutes, and management said, ‘Well, if you're not done with what you need to be done with, you just leave it for the next day or night and you do it then,’ ” the mail carrier said, adding, “There are no routes that can be sorted in 25 minutes.”

Hours after DeJoy announced the policy suspension, he said workers were told to return to “normal” operations — at least until November.

Wisconsin already experienced delayed and missing ballots in its April and August elections, which saw record levels of absentee balloting. And the on-time delivery rate for mail in the Lakeland District, which covers most of Wisconsin and stretches into northern Illinois, is among the lowest in the nation stretching back to 2016, APM Reports and Wisconsin Watch have reported. That was long before DeJoy’s controversial cost-cutting moves.

Delays in postal delivery could significantly disenfranchise would-be voters in Wisconsin, who could play a decisive role in November’s presidential election. In Wisconsin’s April 7 presidential primary, 81,000 ballots were delivered after Election Day, according to the Wisconsin Elections Commission. Of those, 79,054 ballots were only accepted because of a court ruling extending the state’s usual deadline.

“Given the projected increase in absentee voting by mail (in Wisconsin) in the November 2020 general election,” the multistate lawsuit against the Trump administration alleges, “it is likely that the recent degradations in Postal Service operations would again lead to large numbers of untimely ballots.”

Czubakowski, the Postal Service union official in Milwaukee, says he believes DeJoy aims to shake public confidence in the service rather than improve it.

“What they're doing, (is) using the pandemic and the election as a two-pronged attack, not only to suppress votes, but to privatize,” he said.

Confidence in the Postal Service has already plunged in Fitchburg. Mark Richmond — co-owner of Chef Knives to Go and Susan Brown’s husband — said Tuesday he will closely watch whether DeJoy’s pause on reforms will improve service.

But the couple will not return the bulk of their business to USPS until the service proves it can do the job.

“We'll find out fast,” he said. “People don't wait around a whole long time to say, ‘Hey, I tried tracking my package and it didn't show up.’ ”

The nonprofit Wisconsin Watch (wisconsinwatch.org) collaborates with Wisconsin Public Radio, PBS Wisconsin, other news media and the UW-Madison School of Journalism and Mass Communication. All works created, published, posted or disseminated by the Center do not necessarily reflect the views or opinions of UW-Madison or any of its affiliates.