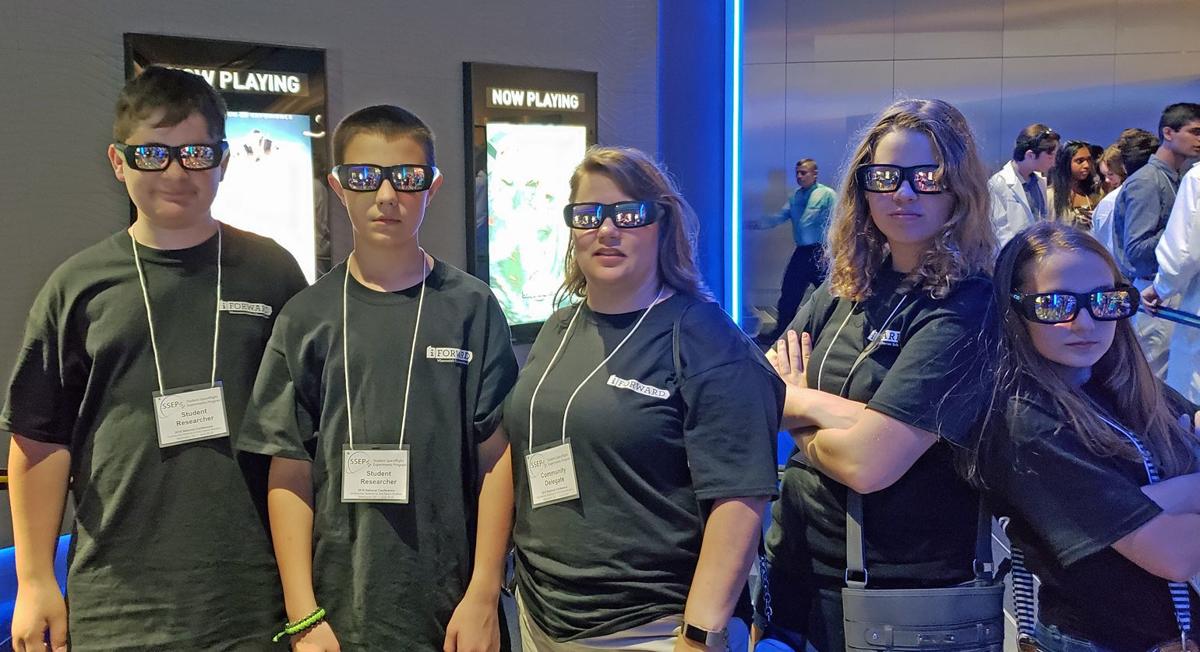 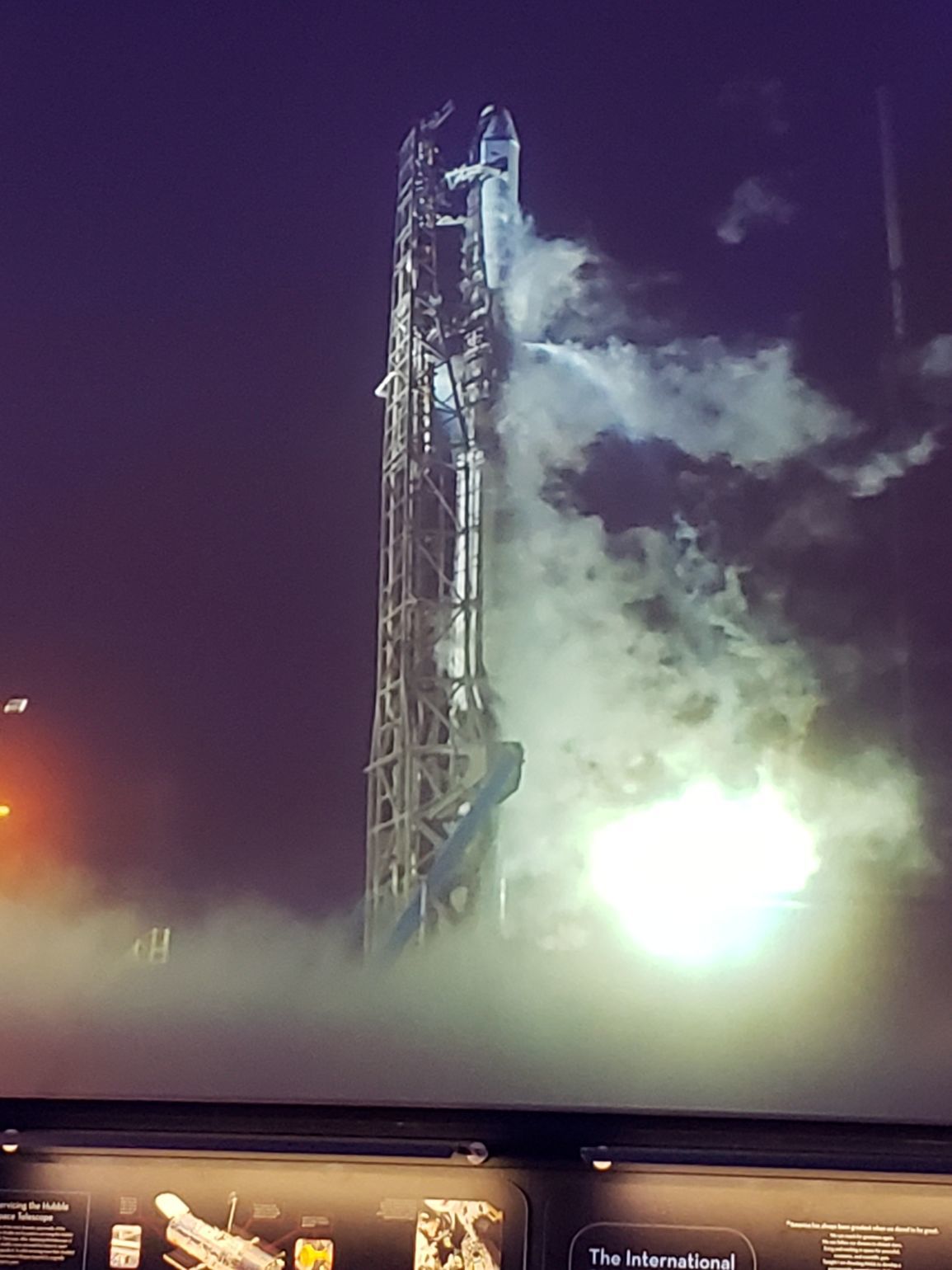 While at the Smithsonian Institute , the student team had an opportunity to view their package take flight from a feed at the National Air and Space Museum. 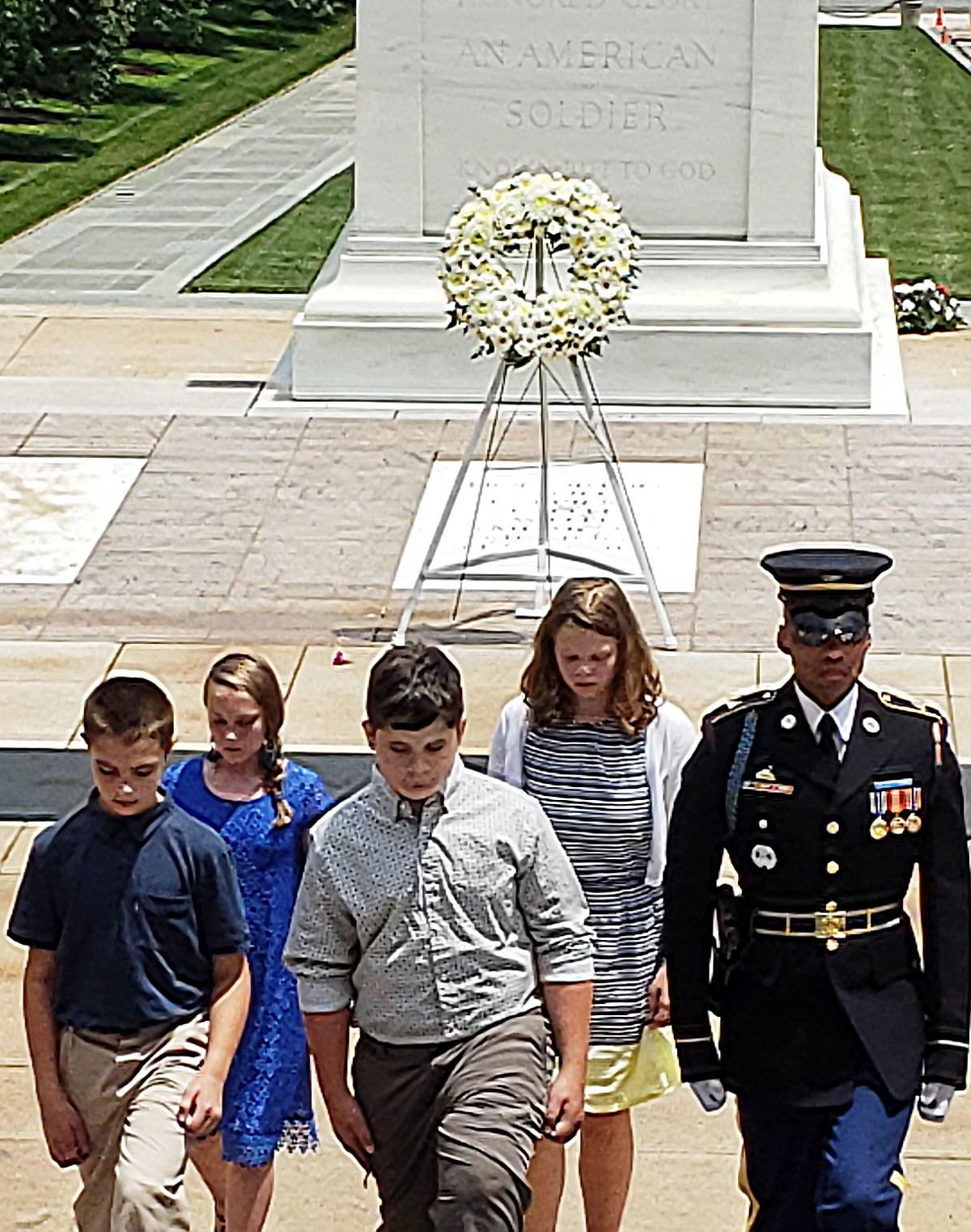 Nichols, Parker (front), Finch and Mullikin (back) are escorted by a Tomb Guard sentinel after laying a wreath at the Tomb of the Unknown Soldier.

Earlier this spring, a team of four middle-school students from Grantsburg’s iForward Online School found out their low-gravity experiment was selected to be performed on the International Space Station. In the 13 years that the SSEP (Student Spaceflight Experiments Program) has been offering this opportunity, the team represents the first online school chosen to participate. At the end of June, when the students were presenting their concept and research at the Smithsonian Institute’s National Air and Space Museum, their experiment package was leaving terra firma.

Between March and June, the team - Aaron Nichols, Racine; Dominic Parker, Sobieski; Grace Mullikin, Holmen; and Anita Finch, Grantsburg – spent countless hours running trials and preparing their materials and instructions for launch. Their experiment studies how gallium reconstitutes after being melted in a low-gravity environment as opposed to within Earth’s gravity and searches for any differences in structural composition.

The launch was originally scheduled for June 9 but - as is typical for these types of transports- it was pushed back to June 29. That date coincided with the days that the young scientists were at the Smithsonian Institute to present their experiment proposal to scientists, astronauts, and fellow experiment teams.

“We got to see the space towers up close and Launch 39 where all the Apollo rockets went up,” Beesley said. “They treated us like VIPs right from the get-go.” Beesley and the iForward group were joined by approximately 244 people representing 12 schools involved in the project.

The experiment packages for the SSEP program were carried to the International Space Station via the private rocket the Dragon, owned by Elon Musk of SpaceX.

“The exciting part lasted about 10 minutes,” Beesley said of the June 29 5:42 a.m. launch. “We got confirmation about a day and a half later that they had connected with ISS and after another (day), that our experiment was on board.”

“They are middle schoolers. So they get up to present, and the first little gal (Anita Finch), pulls out a stool, steps up there and adjusts the microphone,” iForward SSEP Co-Director Constance Quade sets the scene. “And she says in a tiny little voice, ‘Thank you so much for waiting this whole time for us to present.’ She had the audience from that point on.

The students did not miss out on seeing the launch, however. The launch took place between Days One and Two of presentations, and they woke up early to head to the Smithsonian to view the launch. If the photos are any indication, they probably got a better view from cameras at SpaceX than their colleagues in Florida.

When not busy with presentations, the team took in several important tours. They visited various monuments, snapped a shot of the iForward banner in front of the US Capitol, and toured the Smithsonian Natural History Museum. They were also selected for the honor of placing the wreath at The Tomb of the Unknown Soldier at Arlington National Cemetery.

After their work in Washington was finished, they celebrated by dining at Mt. Vernon, George Washington’s home, and watched a spectacular fireworks display from his historic lawn.

But their work is not over yet. In the next few weeks, the experiment will be conducted by the ISS, after which, the experiments will return to earth to begin comparisons. It is anticipated that this could occur as early as the end of July.

Once the experiment returns to Wisconsin, it will travel to UW-Eau Claire, where the Material Science and Engineering Department under the supervision of Dr. Douglas Dunham will assist the student team to compare the ground results to those of the low gravity results.

“Without Dr. Dunham’s skill, organizational effectiveness, and sense of caring for the future of these young people, our initiative would have never launched,” Beesley said in a letter to UW-Eau Claire’s Chancellor James Schmidt.

“What made this conference so impressive was that this was not a fabricated event for kids, but a conference in which the professional scientists were truly learning from the students and vice versa,” iForward English teacher Jena Winder shares.

As for the iForward team? They have a new appreciation of how unique this experience is

“Before they left, they knew it was going to be neat,” Quade said. “I don’t think they realized until they were there what a huge honor this was. Afterward, one of the kids said, ‘This is kind of a big deal, huh?’”

For more about iForward Online School, visit iforwardwisconsin.com. Information on the SSEP program can be found at http://ssep.ncesse.org. To learn more about the student team and their experiment, read “Student Team’s Work Goes Low-Gravity”at burnettcountysentinel.com.