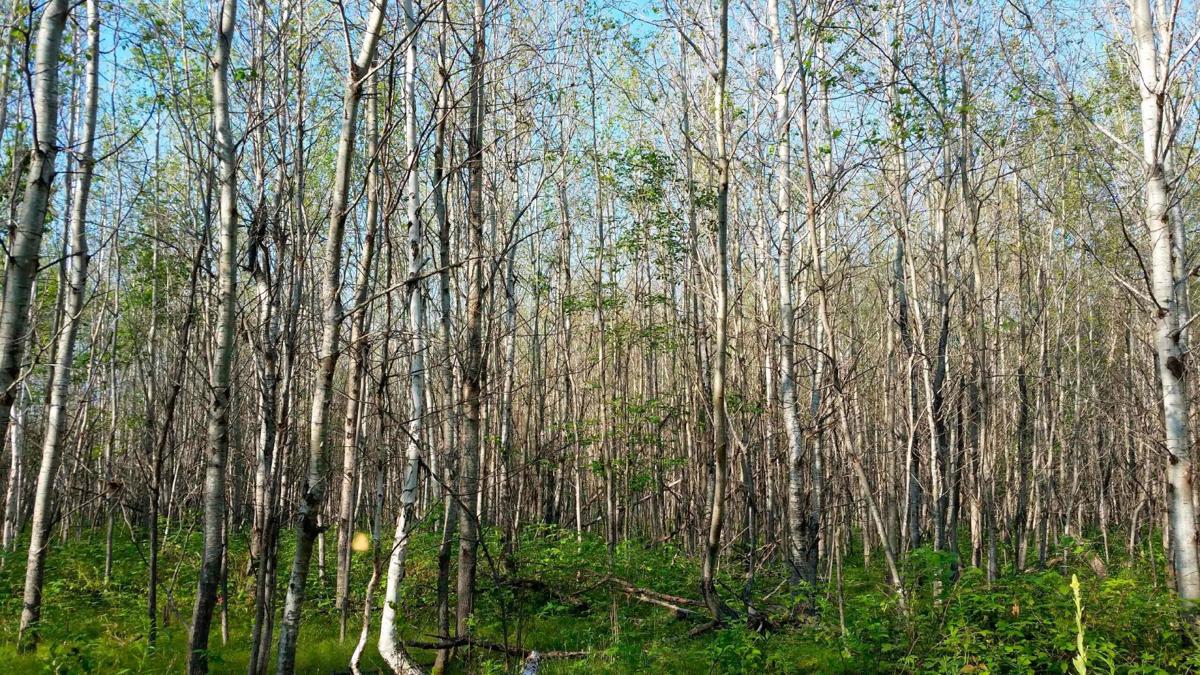 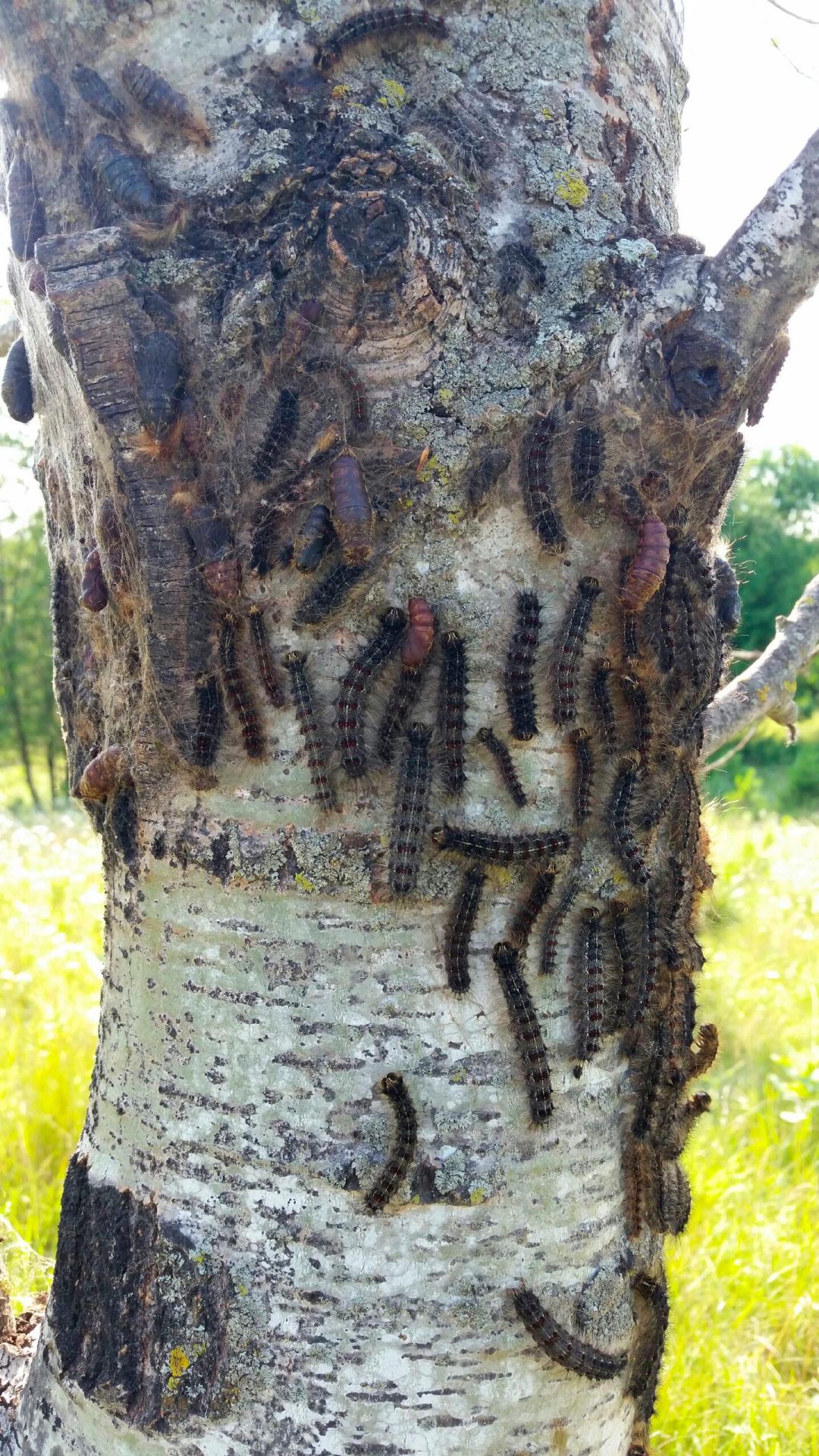 TOWN OF DEWEY— Over the course of two and half months, Rachel Swanson’s property fell victim to the defoliation of 60 acres of high value trees by foliage chomping gypsy moths. Her trees look as though winter is on its way.

Gypsy moths are an invasive species first introduced to the United States in 1869 by entomologist E. Leopold Trouvelot. The species was brought to New York in the hopes that by breeding the gypsy moth with the silk worm, a stronger, more weather resistant silk would be produced.

Unfortunately, years later, it was discovered gypsy moths are extremely destructive to landscapes by their defoliation eating habit.

Nearly a century later, gypsy moths were spotted in eastern Wisconsin. As caterpillars, these insects have hairy bodies with blue and red spots. When hatched, gypsy moths can grow up to three inches long within six weeks.

“A seven-acre block of 15-year-old aspen sustained over 75 percent defoliation. Defoliation occurred on aspen, birch, white and red oak, red maple, and red and white pine. Life stages ranged from third instar larvae to adults, with late instars and pupae being the most abundant stages,” he said.

The state is separated into quarantine and non-quarantine counties. Fifty of Wisconsin’s counties fall under the category of quarantine in which there are high volumes of gypsy moths. These counties can choose to partner with the DNR to receive aerial sprays to suppress the abundance of gypsy moths.

Burnett County is a non-quarantine area. Cigan mentioned that while outbreaks in the western part of the state  are not common, it does happen. However, the number of reports of isolated incidents in Burnett County in the last year came in at zero. Swanson’s property did take the DNR by surprise as it is way outside the “leading edge,” the western point of the quarantined counties.

Due to the high, unexpected volume of the invasive insect on Swanson’s property, she was told her property is eligible for the Slow the Spread Program which is run by the Department of Agriculture.

This program is sometimes offered to properties or areas in western counties that see isolated attacks like Swanson’s.

Chris Foelker of the Department of Agriculture, Trade and Consumer Protection assessed Swanson’s situation and stated this incident is in fact startling but is most likely due to unintentional human transportation of gypsy moth eggs. This was Cigan’s theory, also.

These isolated incidents are most commonly triggered by items which were moved from areas where gypsy moths are established in the state or other states in the last few years.  The items can include anything left outside in July through August and left undisturbed through the following May: vehicles, campers, firewood, play structures, outdoor furniture, etc.

“This was caught and well contained,” said Foelker, who then explained the damage has been done for the year on the property. He mentioned the best plan of action is for the Department of Agriculture to spray the property in spring before the eggs hatch. This spray will affect the young as adult gypsy moths are not the major culprits of defoliation.

Gypsy moth eggs sit through winter in clusters of hundreds of eggs called egg masses; these masses will then hatch in the first two weeks of May.

The spray, a naturally occurring soil bacteria, Bacillus thuringiensis var. kurstaki (Btk), will settle upon leaves and when the insects ingest the foliage, the bacteria activates and cuts a hole in the stomach causing death.

“With a population this dense, some will slip through the cracks,” said Foelker.

However, he followed by stating this property will receive two years of treatment.

Some ways to combat Gypsy Moths

(a) Prevent the spread to new areas by checking vehicles, equipment and other outdoor items before you leave on vacation and again before returning.  Buy and burn only local firewood to prevent gypsy moth and other pests from spreading to new areas.  Don’t let gypsy moths or other pests hitch a ride with you.

(b) Contact the DNR or the Department of Agriculture about pheromone disrupters. In some cases, these disrupters come in the form of a box that hangs on a tree or other structure and sends out pheromones that confuse male gypsy moths who, in turn, are not able to locate females thus delaying or prohibiting reproduction.

(c) Tanglefoot Pest Barrier or Sticky Tree Bands can be placed around tree trunks to help curtail the caterpillars movement into and out of the tree canopy.

(d) Scraping egg masses from trees is also one way of decreasing the spread of gypsy moths. Once an egg mass is removed, it is best to place the mass into hot, soapy water to ensure no eggs will hatch.