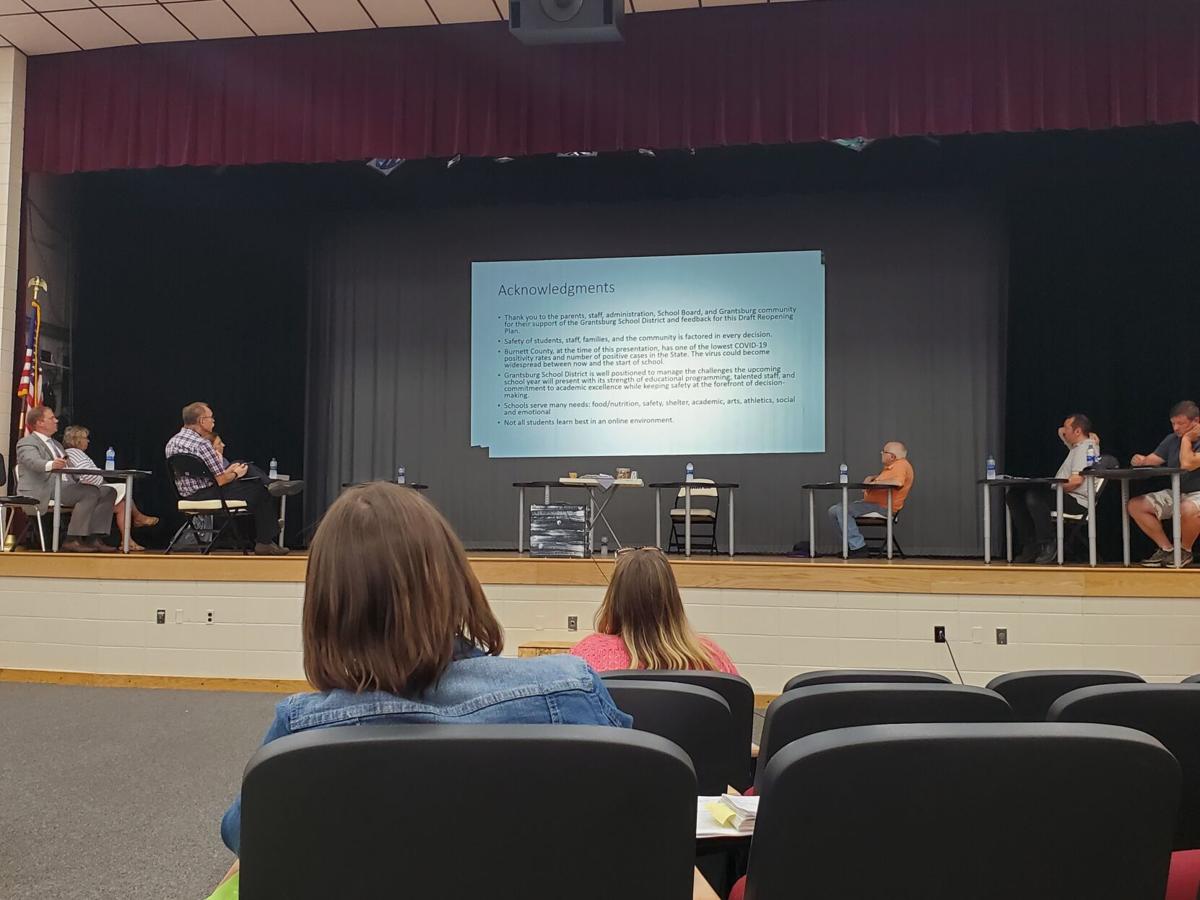 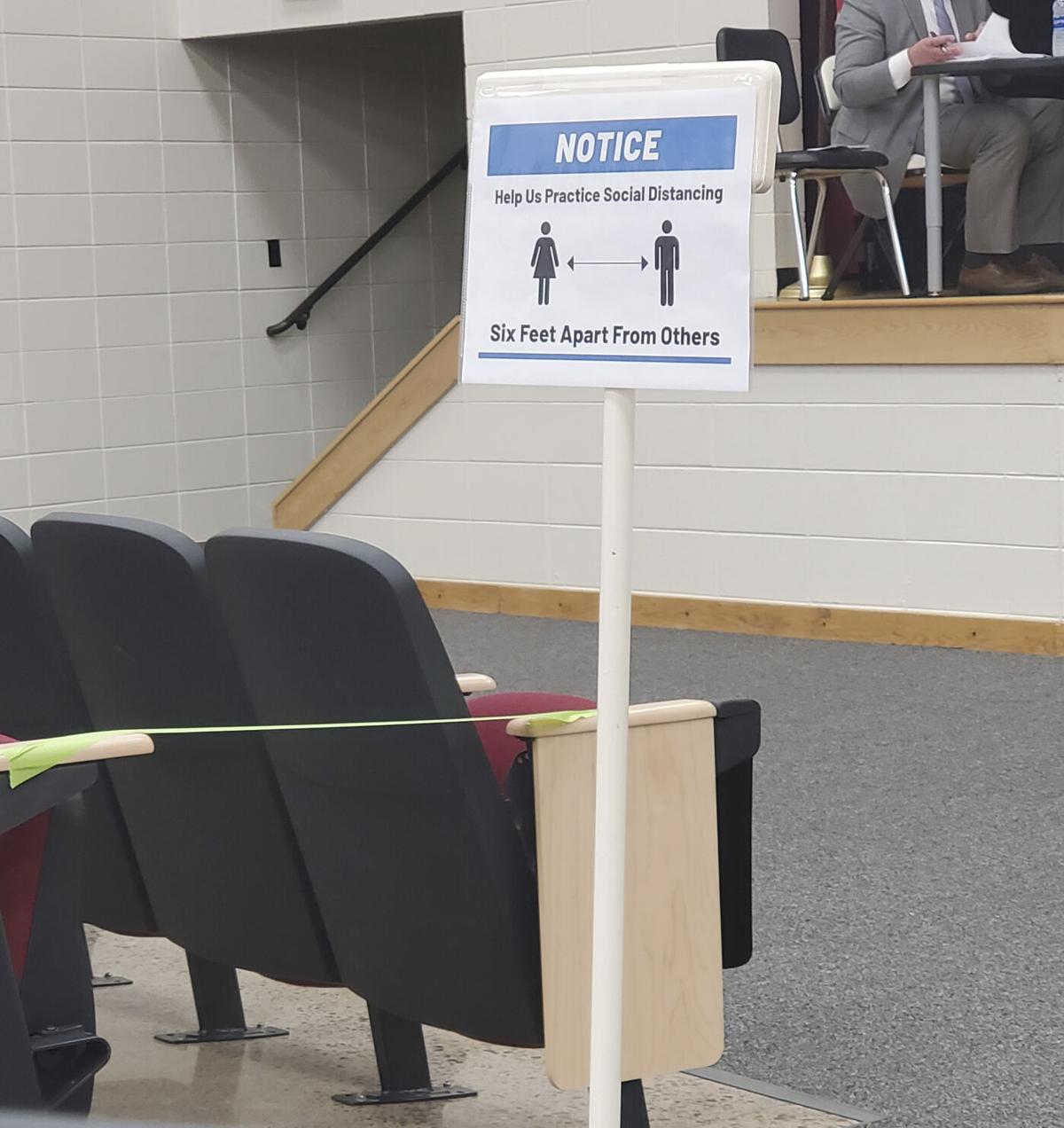 Several parents were in attendance at Grantsburg’s Monday night school board meeting to voice their opinion on the reopening of school in the fall and to hear the district’s current tentative plan.

The meeting opened up with the board president, Dave Dahlberg asking if there was anyone in attendance who would like to speak with the board. Angie Bonander has four kids in the school district and was the first to speak to the board. She said some of the parents’ concerns that if the school goes back in session full time were: their kids having to wear masks full time, extra precautions taken that may make their kids feel uncomfortable and what if some parents aren’t comfortable sending their kids to school?

Bonander said there were some concerns if the school utilized distance learning again as well. Some of the concerns were: what sort of safety measures would be in place on the devices being sent home? If parents have multiple learners in their house, how can they better keep on track with their students’ schooling? Parents are also wanting more live teaching time with distance learning and better attention given to special education needs students.

“There were also families that also felt like their special education needs students was kind of thrown to the wayside and there wasn’t a lot to keep track of that.”

“Our kids deserve to be in a classroom if possible.”

Chris Anderson was the next parent to speak with the board. He brought up a big concern with the safety of electronic devices being sent home during distance learning. He asked the board why they had not discussed the issue of the problems with the safety measures being taken on these devices in the past. He said he was completely blown away by the lack of firewalls and restrictions on the devices.

“I have some things I can pass out to all of you regarding conversations that have been taking place including photos and attachments.”

Anderson stated that he feels this issue very much needs to be addressed and that it should have been dealt with sooner.

“I’m assuming these children have been able to take these home for the past several years, so how much exposure has taken place in that amount of time? Things like child predators, pornography, untrackable video logs between students, kids chatting until early hours of the morning and inappropriate materials viewed in the classroom during classroom hours.”

Dahlberg told Anderson that the board would be interested in seeing the handouts that he had.

Natalie Finch, who has two children in the district, also voiced her concern when it came to the electronic devices. She said that she felt she wasn’t even informed that her child had access to Google and that maybe a letter should be sent out informing parents that their children have access to email.

“My child received some harassing messages, and we didn’t realize why she hated school until the iPad came home and we found out she was getting these messages.”

Finch said that in terms of children going back to school, children are not often ‘safer at home,’ as Wisconsin’s tagline says. With homes that have dual essential workers, those children are often put into overcrowded daycare centers. Another parent spoke on that concern that she was having an issue finding childcare for her child and she’s a single working parent.

Kayla Woody also made the point that a lot of children are not safer at home- that the school is their safe place.

“A lot of our kiddos here in this district are not safer at home, school is their safe place, poverty is keeping them from having good food at home, they may be in some scary abusive situations at home and statistically, the abuse rates are rising, but we don’t know that is happening because where that is reported is here at the school.”

With no other parents wanting to voice their concerns or opinions, the meeting moved forward and Joshua Watt, the District Superintendent was the one to give a presentation on the tentative reopening plan for the school district in the fall.

The current plan is that the Grantsburg School District will be opening with daily in-person instruction with safety modifications beginning Sept. 1. The start of any school activities will begin in August in small groups or online. The planning for school reopening will continue this summer as Covid-19 continues to change.

Some safety measures that the district is taking includes purchasing additional cleaning supplies and PPE such as face coverings, hand sanitizer, thermometers, barriers, gloves, face shields, etc. They also plan on managing population density as much as possible both in the classrooms and at events. They will modify the classrooms to maximize space (3-6 feet apart for social distancing).

The district is not requiring students to wear a face mask or covering but highly suggests it, especially when in the hallways or when they cannot social distance. Students are required to self-screen for symptoms before coming to school and should stay home for 72 hours if they have any of the symptoms.

Before coming up with the reopening plan, a survey was sent out to parents of the students in the district asking different questions related to reopening the schools. One of the questions was ‘would you be interested in returning to in-person instruction at school?’ and 90% of the parents responded with ‘yes’ or ‘likely.’ The survey responses were a strong reason for their plan to reopen the district for in-person instruction.

Watt stated the PowerPoint will be made available for the public to view if they would like to view the full tentative reopening plan and survey results. It is available to view here.