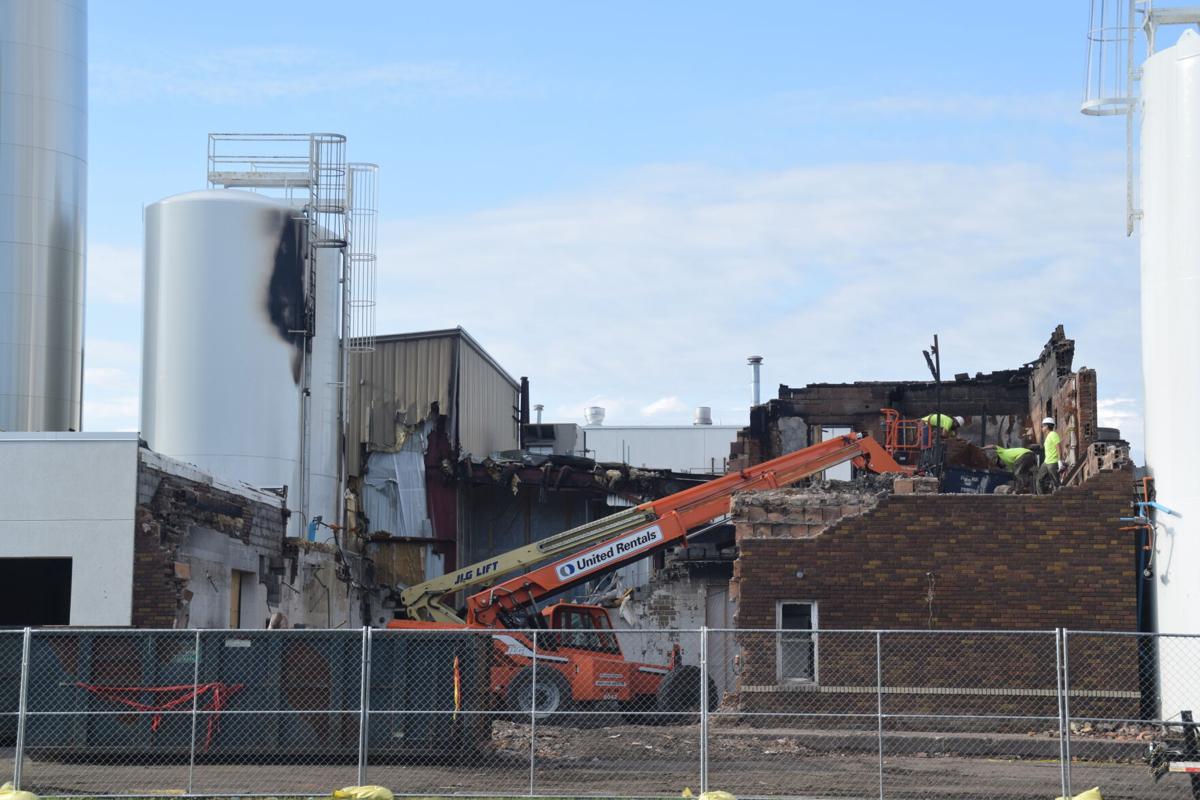 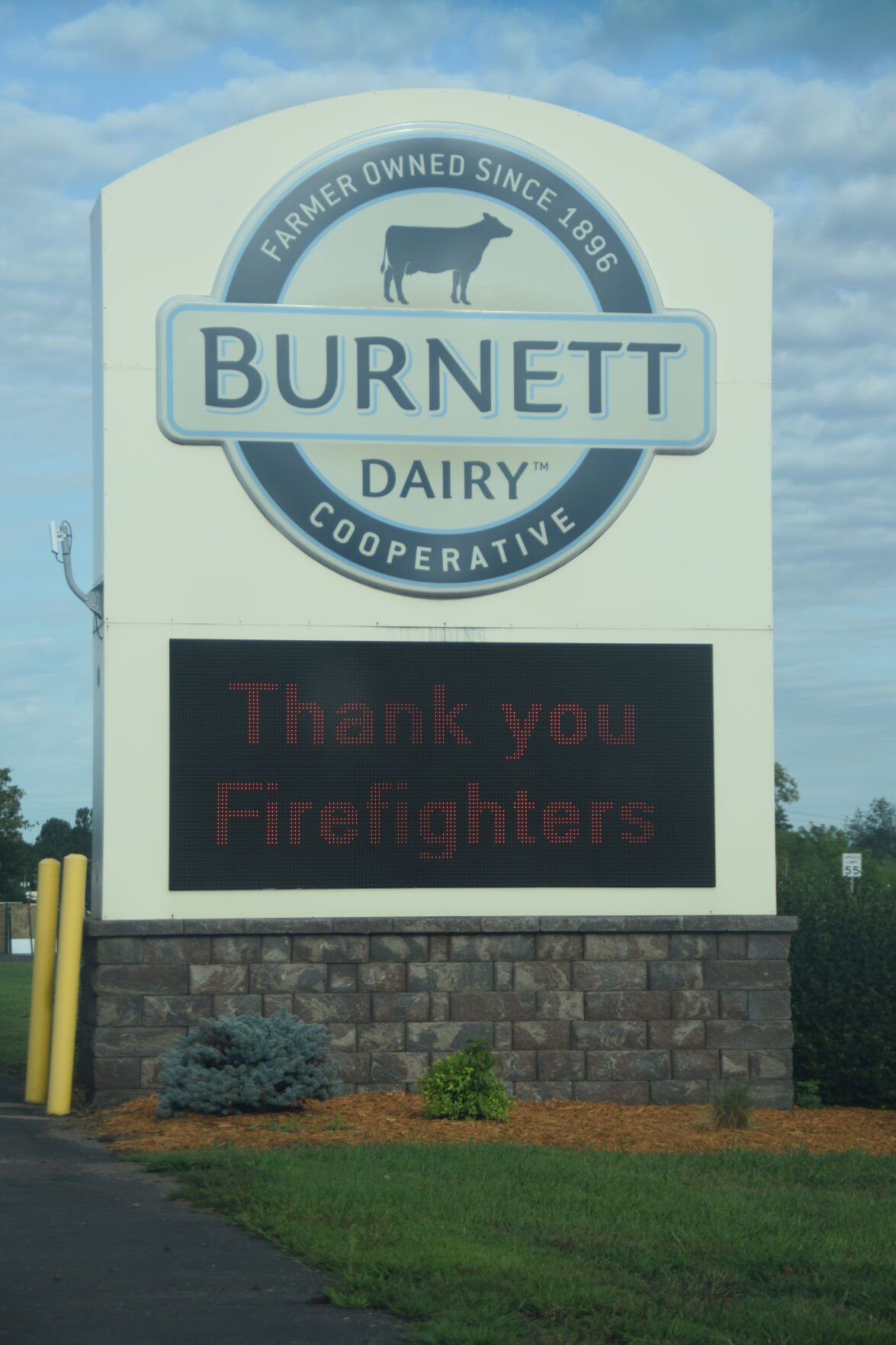 When Burnett Dairy Cooperative employees reported a potential structure fire in the Wood River Creamery building it could have been an unmitigated disaster. However, Burnett County First Responders and fire crews from the surrounding area jumped into action.

Those men and women from countless departments from Burnett County and the greater surrounding area were given the appropriate praise by officials.

Later on Tuesday, after the Sentinel went to press, another press release stated that fire departments in Danbury, Scott, Webb Lake, Shell Lake and Spooner helped with the fire on Tuesday.

While those departments were handling the fire at Burnett Dairy, Jackson Fire Department was covering the county in case another fire broke out.

Many of them are volunteers and Siren Chief of Police Chris Sybers pointed out that these men and women worked their jobs that day then went to fight the fire for roughly 12 straight hours.

Sybers than made the call to bring in a number of other departments from the surrounding area.

Sheriff Tracy Finch told the County Board of Supervisors about the call and said it was a “truly amazing response” from everyone involved.

The Burnett Dairy workers noticed smoke in the creamery building late on Monday night. They called 911 and got out of the building safely. Initial reports suggest the fire started in the boiler room from a mechanical malfunction.

Workers were out of the building when fire crews arrived and the fire erupted in the creamery, which was built in 1896.

Fire crews from across the region spent the next almost 16 hours battling the fire.

Grantsburg Fire Chief Cory Barnette said the crews did, “a hell of a lot of work that day and it was done with the help of a lot of people.”

By Tuesday morning the fire had been contained but smoke continued to billow from the brick building as crews doused it with water. Grantsburg Fire trucks were seen tapping fire hydrants in the village to get as much water as they could.

“I am very proud of this group,” Finch said. “We are very lucky to have these Burnett County employees.”

“And our Highway Department was phenomenal. They were out blocking off streets and re-directing traffic throughout the ordeal,” Finch said.

“They did a hell of a job,” Sybers said of the crew that kept the fire contained. “It was very dangerous, and they all did a great job. They dumped a lot of water on that building.”

Crews had set up for refilling stations around the area due to the amount of water that was needed. There were two stations in Grantsburg, one was at the hydrant on the corner of James Avenue and State Road 70 and the other was at the Grantsburg Fire Hall.

“They needed these sites to retrieve water,” Sybers said.

There were also two filling stations on Mud Hen Lake and another on Wood Lake because the crews needed as much water as possible.

Sybers said there has been no official debriefing yet on the fire, but he expects the amount of water used on the fire to be very high.

Like most of the team on the ground Sybers arrived on the scene shortly after midnight Tuesday morning and did clear the scene until about 3 p.m. on Tuesday.

There was an extreme amount of concern regarding two chemicals used in the dairy process - anhydrous ammonia and chlorine.

“There were lots of dangerous chemicals inside and it was a hairy situation for a while,” Finch said. “I’m very proud of our crew.”

Finch and Sybers both noted that these chemicals were not ignited during the fire.

The ammonia lines were not hit during the fire and that's very good because it could have been disastrous if they were hit. Sybers said it could have blown up the whole creamery building and would have injured numerous firefighters.

“It wouldn't have spread enough to burn down houses, but it would have been really bad,” Sybers said.

Although the fire did not get to the lines, the lines were hit after they were shut off.

“(The ammonia) in the lines needed to bleed off and we kept hitting it with water to keep the vapors from igniting,” Sybers said.

He added the fire was mostly out by about 4 a.m. Tuesday, but because of the ammonia line they had to keep drenching it with water until the rest of the residual ammonia was out of the line.

The fire was initially reported as a mechanical malfunction, then it was believed the fire started in the boiler room. There is still no official cause of the fire.

Barnette said the cause of the fire is undetermined at this time.

“This was a tremendous effort by all departments involved,” Finch and Barnette said in a joint statement. “A potentially very dangerous situation was mitigated by a quick response.”

“This will be a blow to local dairy farmers,” Supervisor Duane Johnson said. “I assume the dairy is not accepting more milk to make cheese, since the cheese parlor is the building that burned.”

The letter said they had to dump milk that was stored in silos on Wednesday as cheese production has been placed on hold.

“We are taking all our farmers milk and we are moving it to other plants and facilities,” Gaiser wrote.

He added that they do have cheese inventory because their cooler was not harmed in the fire.

“It appears that the fire started in the original part of the Wood River Creamery building. This part of the building has sustained significant damage. The damage does appear to be contained within this area. No cheese production happened in this area of the facility,” Gaiser wrote. “A large portion of our facility was not harmed by this fire, and we are hoping that some parts of the facility will be operational soon. Different parts of our facility will open sooner than others and we will do our best to keep everyone informed as we do a phased opening.”

The General Store opened back up for business along with the Ag division on Tuesday afternoon. The Cheese store was opened on Friday morning.

“We will be evaluating these buildings on a day by day basis and will keep you informed of a re-opening timeline,” Gaiser wrote.

Supervisor Don Taylor concluded the conversation at the county board meeting stating, “This is not the first time the dairy has burned, they'll be back.”